Yesterday I found a fantastic article here on queerty that says what I wish every fair-minded faith leader would say...Enough is Enough! 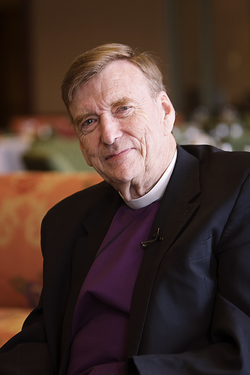 Here is a sample of Former Bishop John Shelby Spongs words in a recently released manifesto detailing his current position with the church on homosexuality:

I have made a decision. I will no longer debate the issue of homosexuality in the church with anyone. I will no longer engage the biblical ignorance that emanates from so many right-wing Christians about how the Bible condemns homosexuality, as if that point of view still has any credibility. I will no longer discuss with them or listen to them tell me how homosexuality is "an abomination to God," about how homosexuality is a "chosen lifestyle," or about how through prayer and "spiritual counseling" homosexual persons can be "cured." Those arguments are no longer worthy of my time or energy. I will no longer dignify by listening to the thoughts of those who advocate "reparative therapy," as if homosexual persons are somehow broken and need to be repaired. I will no longer talk to those who believe that the unity of the church can or should be achieved by rejecting the presence of, or at least at the expense of, gay and lesbian people. I will no longer take the time to refute the unlearned and undocumentable claims of certain world religious leaders who call homosexuality "deviant." I will no longer listen to that pious sentimentality that certain Christian leaders continue to employ, which suggests some version of that strange and overtly dishonest phrase that "we love the sinner but hate the sin." That statement is, I have concluded, nothing more than a self-serving lie designed to cover the fact that these people hate homosexual persons and fear homosexuality itself, but somehow know that hatred is incompatible with the Christ they claim to profess, so they adopt this face-saving and absolutely false statement. I will no longer temper my understanding of truth in order to pretend that I have even a tiny smidgen of respect for the appalling negativity that continues to emanate from religious circles where the church has for centuries conveniently perfumed its ongoing prejudices against blacks, Jews, women and homosexual persons with what it assumes is "high-sounding, pious rhetoric." The day for that mentality has quite simply come to an end for me. I will personally neither tolerate it nor listen to it any longer. The world has moved on, leaving these elements of the Christian Church that cannot adjust to new knowledge or a new consciousness lost in a sea of their own irrelevance. They no longer talk to anyone but themselves. I will no longer seek to slow down the witness to inclusiveness by pretending that there is some middle ground between prejudice and oppression. There isn't. Justice postponed is justice denied. That can be a resting place no longer for anyone. An old civil rights song proclaimed that the only choice awaiting those who cannot adjust to a new understanding was to "Roll on over or we'll roll on over you!" Time waits for no one.

[...] I make these statements because it is time to move on. The battle is over. The victory has been won. There is no reasonable doubt as to what the final outcome of this struggle will be. Homosexual people will be accepted as equal, full human beings, who have a legitimate claim on every right that both church and society have to offer any of us. Homosexual marriages will become legal, recognized by the state and pronounced holy by the church. "Don't ask, don't tell" will be dismantled as the policy of our armed forces. We will and we must learn that equality of citizenship is not something that should ever be submitted to a referendum. Equality under and before the law is a solemn promise conveyed to all our citizens in the Constitution itself. Can any of us imagine having a public referendum on whether slavery should continue, whether segregation should be dismantled, whether voting privileges should be offered to women? The time has come for politicians to stop hiding behind unjust laws that they themselves helped to enact, and to abandon that convenient shield of demanding a vote on the rights of full citizenship because they do not understand the difference between a constitutional democracy, which this nation has, and a "mobocracy," which this nation rejected when it adopted its constitution. We do not put the civil rights of a minority to the vote of a plebiscite.

I will also no longer act as if I need a majority vote of some ecclesiastical body in order to bless, ordain, recognize and celebrate the lives and gifts of gay and lesbian people in the life of the church. No one should ever again be forced to submit the privilege of citizenship in this nation or membership in the Christian Church to the will of a majority vote.

For those interested in the complete text put on your asbestos suit and read here.

John Shelby Spong, former Bishop of the Espiscopal Diocese of Newark, has long been an advocate for rethinking the churches stand on many controversial issues. He has written countless books calling for Christian believers of all stripes to look at the bible less like an inerrant document meant to be taken litterally and more like a living one, subject to change and the context of time. Some of his works in this vein are: "Rescuing The Bible From Fundamentalism", "Why Christianity Must Change or Die", and "The Sins Of Scripture". Not all these works address the same issues but all have a common thread...that refusing to look at scripture as a living document prevents us from alowing the Christian faith also be to alive and change with time.

I have read a few of Former Bishop Spongs works and he makes alot of very interesting points. I can't always agree with him on his interperetations of certain Biblical events...(I.E. the Apostle Paul being gay and hating himself) but niether can I refute them. I don't think you have to go along for the ride with everything Former Bishop Spong asserts to get the the essence of what he espouses....that ALL peoples should have a place in the church...that religious thought should ALWAYS be handled responsibly and with care....and that our faith should never be used to discriminate against our fellow human beings.

The notable thing in Mr. Spongs discourse is the idea "the time for talk is done"....is it?....is this itself a responsible statement to make when we are so evenly matched in the poles in Washington and Maine? Doesn't this send the message to many people struggling with traditional interperatations of faith that Mr. Spong thinks his viewpoints should be self evident and shame on you for not getting it? How do we help people understand if we don't keep talking? Even if that discourse is a firm demand and not a demure request.

But that aside...Mr. Spong has done something I wish alot of fairer minded faith leaders would do and thats make a deffinitive statement of support that leaves no bones. In that regard I have only to say...Good on you Mr. Spong.
Posted by GFV at 10:49 AM