The National Equality March...March On!

There has been alot of coverage of the National Equality March circling the net this last few days. In my opinion most of it seems to be agenda laden and heavy on bias. Not that I will be bias free..quite the opposite. I will do the best I can to give you my account as seen from a marchers point of view. We had many adventures before the march itself and after, but for the sake of time I will limit myself to just our account of the march. Without further ado...

The morning of the march we got our tired tourist butts out of bed and got everyone ready. Next it was off to the hotel lobby for ritual of Starbucks coffee and pastries for breakfast...the kids get milk of course...not coffee...that would just be to dangerous for society to unleash caffenated children on an unsuspecting public.

Then the journey of a thousand steps begins. Off we march to find the chinatown metro station which is about a three block haul from our hotel on 9th and I streets. Not a bad walk at all. We took Washingtons awsomely easy metro system to the Dupont Circle, D.C.'s "gay district" and walked the remaining blocks to our staging point at the Maddison hotel. On the way were tons of gay couples in the streets. Some headed to the staging area for the march, some going straight to the Capitol Building lawn to secure a good spot to watch the speakers.

Next it was a waiting game as we assembled on 15th street with the other marchers. 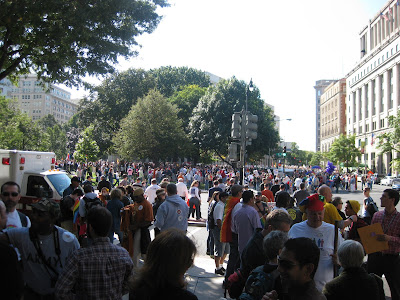 We ran into a few Youtube viewers and got to say hi. We love to meet Youtubers so, never feel bad to come up to us and say hi! We met Sean Chapin and friends and found our spot to wait. It was a beautifull sunny day and getting hotter by the minute, Not at all what I expected for fall on the east coast. More and More people filed in till we couldn't see the end of them in either direction. This is our view looking forward: 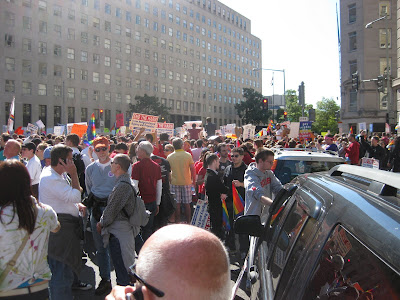 And looking behind us toward the Maddison: 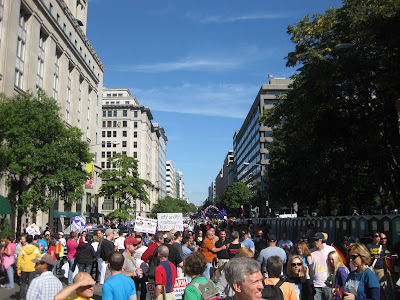 There were many gay groups and more than a few straigt ones as well. We saw a contingent from San Francisco that had some really inventive marching chants. There were flags from everywhere including a veterrans contingent which was great to see. Tiny $5.00 rainbow flags were EVERYWHERE as were the "legalize gay" tshirts. It was great to see such a positive show of support and great turnout. From here in the crowd though there was no way to judge how many people made it. 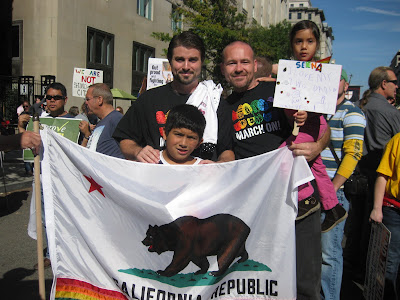 The march was scheduled to begin at 12:00 and we had arrived plenty early. Noon came and went and the crowd didn't move an inch. It was a warm day and people were getting restless. Chants of "March Now!" were breaking out all over the crowd as we waited to begin. In retrospect, there were probably so many people in front of us that it took that long for our section for finally be able to move. But at last we began to move.

We moved down 15th street and then right onto H st. This is where the march changed for me. as we marched past Lafayette square I turned to look left and after the trees cleared...this is what I saw: 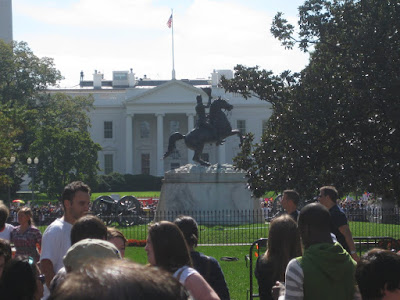 We cheated and cut through Lafayette Square instead of going around it. Along the way We stopped for a photo op: 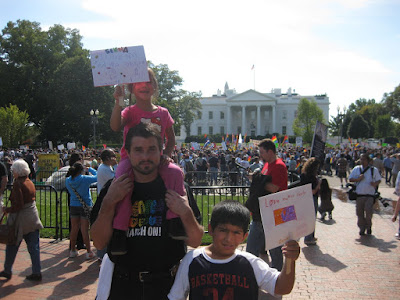 Marching right along after our detour, we eventually turned onto Pennsylvania Ave. This was the longest straight march of the route. The chants were still going strong at this point and spirits where high.

Now,...I have heard lots of conflicting numbers about how many people attended the march. During the march we were told they estimated about 150,000 people. Afterwards on CNN, they only reported it as "several thousand" which is a totall downplay of the size of this event. I've even seen numbers on blogsites as low as 1500-2000 which is utter garbage. Take a look at this crowd and tell us what you think. This is the march down pennsylvania as we saw it Looking behind us on 5th street: 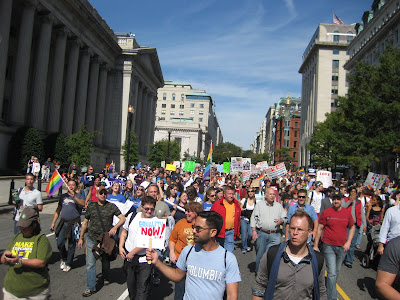 And forward up Pennsylvania Ave: 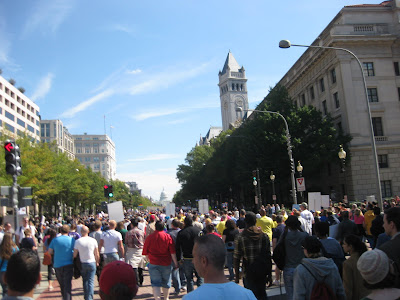 It was at this point in the march that we saw a straight interraccial couple watching the march carrying a sign that read, "Our Marriage was illegal at one time too". I thought that was just awsome. During all this the kids were just champs but the day did take its tole on all of us. Selena started this way: 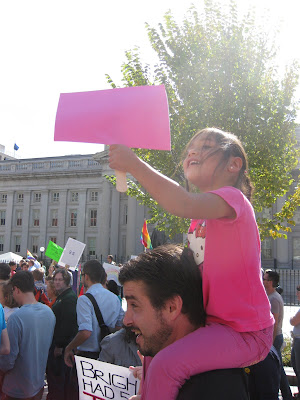 And ended it this way: 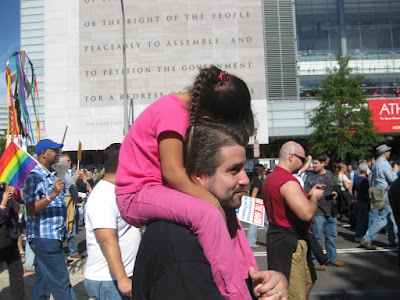 Note the words on the building behind us. Appropriate no?

When we finally hit the lawn at the Capitol Building we were all tired and needed to rest. The crowd there was already unimaginably huge and we had to find a place far back from the stage. While we tried to listen to the speakers Selena discovered her second wind and scoured the lawn for chestnuts....we teased her about being a squirrel storing up for winter but she had a huge pile after a while. at least a hundred. Here are some views of the speakers as we saw them: 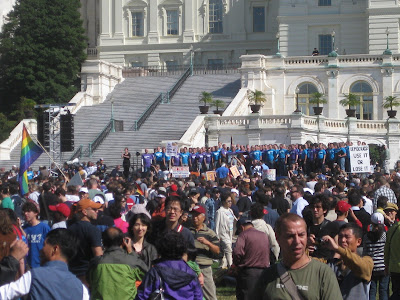 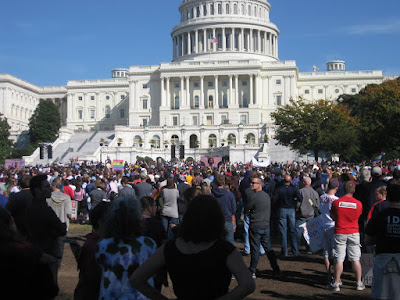 Among the many Youtubers we got to meet was Zachary of stylenxs: 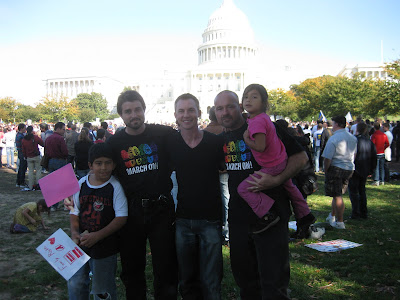 All the while people where streaming in to the lawn Even long after we got tired and decided it was time to get some food and begin the trip back to the hotel. All in all it was a great day and I hope it sent the right message to those that needed to hear it. We are no longer asking for our right...we are demanding those rights. We are not going to continue to sit back and wait for someone to be nice enought to give them to us...its time to demand our due as American citizens. And as lovely as this day was...its only the beginning.

I leave you with these words from Abraham Lincoln we found at his memorial. 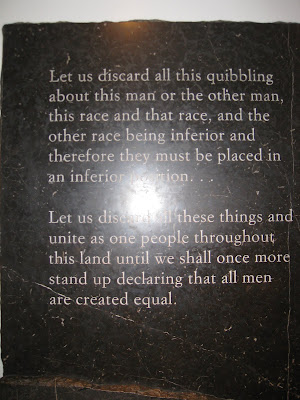 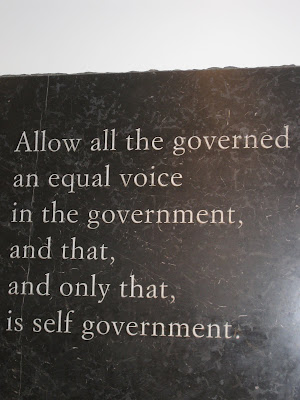