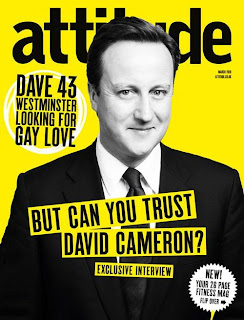 By: Craig Rigby
Gay marriage has been in the news this week in the UK. Politicians from both sides of the aisle are being asked about it so I wanted to go through what they are all saying, and what it may mean for the future.


Most of them seem well meaning, but a lot of them are confused. As an example take Boris Johnson, the Mayor of London. When asked about gay marriage in 2000, before he was a serious politician, he wrote that if you were to allow gay marriage you may as well let a man marry his dog. This week while at a gay pride march (nothing like pride for sucking up to the gay vote) he told gay rights campaigners that he thought the conservative party should support gay marriage. Later, when asked for more information he stated that he fully supports civil partnerships. He doesn't know the difference between the two. How well informed our leaders are...

Also take comments by the Prime Minister. Writing in The Independent newspaper about what he wants to do for gay people, he stated:

“I know there is one other subject that the gay community is particularly interested in: marriage. As someone who believes in commitment, in marriage and in civil partnerships, my view is that if religious organisations want to have civil partnerships registered at their places of worship that should be able to happen.”

Here you can see the Prime Minister seems confused as well. He takes a point about marriage and answers it with a policy on civil partnerships. So before we move onto the other politicians lets set him straight, what exactly are the differences between civil partnerships and marriages?

Difference 1: Anonymity of Union
When heterosexual couples enter a civil marriage, certain information becomes available for public viewing, including names, occupations, and addresses of both parties. In effort to minimise the risk of harassment to either of the persons involved in a civil partnership, the government has decided that less information should be made public. Only names and occupations of the prospective civil partners are required to be made public.

Difference 2: Privacy
A civil partnership becomes legal when the registration certificate is signed by both partners. This does not mean that it must be signed during a ceremony that is public or during any specific event, although many couples will chose a public event for themselves. This allows the partner to enter into the partnership on a private basis if that is their wish. During a civil marriage words are exchanged in front of witnesses and then the register is signed.

Difference 3: Religion
Marriages can be performed by clergy, civil partnerships cannot. There are strict rules preventing any type of religious ceremony taking place while the register is being signed. At the moment some religious gay couples get round this by going to a place of worship for a blessing first, and then going to the registry office to sign the register. In addition the quakers have said that they are going to flout the law and conduct a full religious marriage while the register is signed.

One of these differences is being repealed...religion. A bill is making it ways through parliament to remove the prohibition on religious service. A good thing to, although I wouldn't want any praying and what not at my wedding, the situation as it sits now isn't very good for religious freedom. As the other two differences are arguably sensible provisions that leaves us with one difference; the name. The fact of the matter is that people don't like being treated differently for no reason other than to keep them separate. Whatever he decides to do about it, it would surely be useful if the Prime Minister actually grasped the problem.


Pride week being what it is, a big fat votes market, several other politicians have also been asked what they think about gay marriage, most of the rest of them managed to understand the question.

Lynn Featherstone, the Equality Minister, said that the coalition government intends to formally consult on gay marriage and that this consultation will involve the opponents as well as the advocates. This annoys me, the government didn't consult neo-nazis before the Race Relations Act was passed. Lynn Featherstone always has the air of someone who has lost her shopping list and wandered to the wrong side of the supermarket, I hope she can actually get something done on this but somehow I don't think she is the ideal champion.

All four labour leadership candidates have come out for gay marriage, and they all seemed to know what they were talking about. They aren't all equally good though. Andy Burnham has stated his opposition to lesbian IVF, but strangely not gay adoption. He has stated that all children need a male and female roll model. He sees a difference between children being brought into the world and those already born and in need. I don't agree with him, I think he is painting gay parents as second class, good enough for the unwanted masses but not shiny new babies. He won't be getting my vote.

So there we go, if labour gets in we should have gay marriages. If the Tories stay in we should be getting a consultation towards gay marriage, as long as they can work out what they mean by gay marriage. All should look rosy, lets just hope someone, one day, will be able to find valuable legislative time for a name change and that it doesn't just get shoved to the bottom of the pile as non-urgent for the rest of forever.
Posted by GFV at 2:55 PM