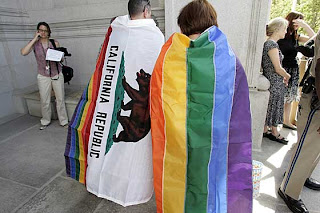 Plaintiffs have demonstrated by overwhelming evidence that Proposition 8 violates their due process and equal protection rights and that they will continue to suffer these constitutional violations until state officials cease enforcement of Proposition 8. California is able to issue marriage licenses to same-sex couples, as it has already issued 18,000 marriage licenses to same-sex couples and has not suffered any demonstrated harm as a result,see FF 64-66; moreover, California officials have chosen not to defend Proposition 8 in these proceedings.


Because Proposition 8 is unconstitutional under both the Due Process and Equal Protection Clauses, the court orders entry of judgment permanently enjoining its enforcement; prohibiting the official defendants from applying or enforcing Proposition 8 and directing the official defendants that all persons under their control or supervision shall not apply or enforce Proposition 8. The clerk is DIRECTED to enter judgment without bond in favor of plaintiffs and plaintiff-intervenors and against defendants and defendant-intervenors pursuant to FRCP 58.

IT IS SO ORDERED."

the text of Judge Walkers ruling points out, show without a shadow of a doubt, how well the legal team of Olsen and Bioes made their case as it reads like a synopsis of their arguments. More to the point, these arguments posess their own weight and deniability...it just took someone to go to bat for them.

As of now Judge Walker has issued a two day stay on his ruling in order for opposing legal council to respond. After that point, if no appeal was pending, the changes to California's constitution banning same-sex marriage would be nullified, leaving the Supreme Courts ruling upholding of same-sex marriage in effect. Marriages could resume. However,...it is fully expected that the opposition will appeal and the case will advance to the 9th district court of appeals. If we won in that court it would apply to all states under its jurisdiction...and so the momentum would continue, snowballing on its way to the U.S. Supreme Court.

the opposition is already going into full martyr mode. Pick your anti-gay group and their websight will be dripping with bile and loaded with accusations of judicial bias...like NOM for example:

"Never in the history of America has a federal judge ruled that there is a federal constitutional right to same sex marriage. The reason for this is simple – there isn’t!” added Brown.


“The ‘trial’ in San Francisco in the Perry v. Schwarzenegger case is a unique, and disturbing, episode in American jurisprudence. Here we have an openly gay (according to the San Francisco Chronicle) federal judge substituting his views for those of the American people and of our Founding Fathers who I promise you would be shocked by courts that imagine they have the right to put gay marriage in our Constitution. We call on the Supreme Court and Congress to protect the people’s right to vote for marriage,” stated Maggie Gallagher, Chairman of the Board of NOM.

Putting trial in quotes doesn't make it any less legal Maggie...nor was Judge Walker open about his sexuality until you made an issue of it during the opening of the trial...and as for the founding fathers...none of them could have foreseen where the future was going to take this country and I'm quite sure they knew that too...which is why they built failsafe protections into the constitution..because they knew that events may occur that they could not foresee and that the people would need protections....today their forsight is vindicated....even if only till the next round.

But tonight we party! Get out and celebrate in whatever way you can. Raise a glass and toast to equality...toast to love...then get ready to get out there and fight again because we are nowhere near done with this thing. Congratulations everyone!

Read Judge Walkers full ruling and a listing of celebration rallies below the fold:

For those who want to take it to the streets...a listing of California rally locations...other state time and locations can be found on Wockner's blog....thanks to him for posting it!