Same-Sex Reproduction...A Not So Far Off Possibility? 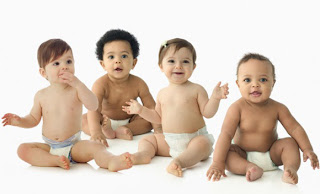 As much as anti-gay pundits bang the drum that gays cannot biologically reproduce, we are no strangers to the process. Many gay couples are raising children from previous marriages and others may have built their family with surrogacy or invitro Fertilization. Their are plenty of same-sex families out their raising children biologically related to at least one partner....but what if you could have a child that is biologically, a product of BOTH partners...think it can't be done? Well, not so fast...science might be catching up with us.


Recently, I recieved a tip from a Youtube viewer about about a blog called The Chomosome Chronicles and a recent post regarding sexual reproduction for same-sex couples using a process of inducing adult skin cells to become a form of stem cell and then convincing that stem cell to become a sperm or and egg with the same DNA of the donor.

Wow...perhaps we really do live in the fantastic future where science fiction is becoming our science fact. I still wonder what happened to my flying car and robot maid. The world of genetics is exploding with new developments but you don't hear about its developments as often as you do about the newest tech gadget. Perhaps is because advancements in the field bring as much trepidation and questions as they do wonders. Just like fears of technology become played out in movies and television, warning that our technologies will seek to destroy us. So do biological and genetic advancements have their shadows to haunt our dreams.

but first...I am no scientist and will probably get a detail or two wrong, but I think a laymans explanation is in order...the article is very clear in pointing out that this break through is only theoretical at this point and is based some remarkable recent developments:

The first is the ability to induce adult skin cells to become "pluripotent stem cells"...the type of stem cell most often attributed for its ability to develop into almost any other kind of cell....through a process called "celular reprograming". The resulting stem cell would have dna genetically identical to its donor. This process would be an altenative to using embryonic stem cells....next the skin cells we have reprogramed into stem cells can then be encouraged to differentiate into sperm or eggs. 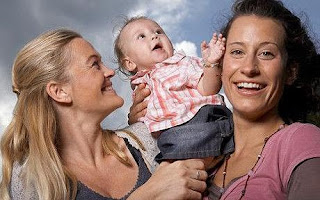 The remarkable thing is that the donor can be anyone. A male same sex couple can have one parters skin cells reprogrammed then differentiated into and egg containing his DNA...then the second partners sperm is combined with the egg and then placed within a surrogate womb....the resulting child would be a combination of both of their genetic profiles. Like wise, the process would work the same for a female couple with the additional fact that one of them could carry the child to term.
However, the process has some limitations as the article details. For male couples, since we carry both and "X" and a "Y" chromosome...there is a 50% chance that the "Y" chromosome could be passed on into the egg resulting an in embryo with two "Y"s...which would not survive. Their is also the additional consideration of having to find someone willing to carry the child.
Female couples would only be able to produce female children...having no "Y" chromsomes to contribute.

Even with its limitations...this is a pretty incredible thing to . Its as complicated as surrogacy but has the upside of child that is the product of both partners. As apposed to traditional surrogacy which would be the dna of only one partner plus an additional person outside the relationship who could potentially decide later on down the road that they want to assert parental rights. But...in the case of a male couple...would the woman donating her womb still be considered the mother in the eyes of the law even though the child is not biologically related to her? It would seem that the answer to that would be a common sense "no"...but we are dealing with the state here and common sense does not always apply when we get into the realm of the state and same-sex issues. In addition, I'm sure the process will be quite expensive...making it an option for all but a few. It was also expressed in no uncertain terms that this process is not commercially available nor was the writer of the article aware of anyone working toward that goal...only that the potential techniques existed. 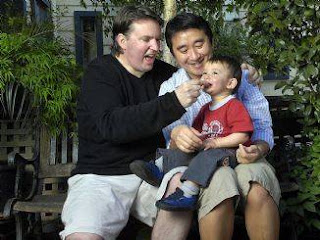 It does however, put a new wrinkle in the debate of adoption vs. surrogacy. The standard objection to surrogacy being, why go to the trouble/expense of bringing another child into the world when there are so many children waiting for home and someone to love them. How important is having a child that is gentically linked to you and your partner? However...as as commentors in Craigs wednesday post pointed out....for many same-sex couples in places where adoption is illegal to them, having a biological child is the only option for creating a family. Now a young same-sex couple can begin that fantasy process of imagining what a child brought about by a pairing of them and someone they desire would look like...a process previously only engaged in by heterosexuals. Next time you fall in love, you will be able to look at that person and imagine what your babies would look like...thats heady stuff and Its alot to think about, even if its not actually available...yet.

I can already see that certain people in the religious right would be very upset by this and the accusations of tampering with nature will abound. But whats so different between this and traditional surrogacy? It would not use embyonic stem cells...which is something that makes many uncomfortable, even outside the religious right. This would simply be akin to many of the other fertility treatments already being practiced....and has just as much application to infertile heterosexual couples as it does to same-sex couples. That fact however, will not stop some people from painting this process as an unatural manipulation of nature.

Opinions and forecasts of doom will abound. For myself...If adoption is available, it makes more sense considering how many children are out there in need of homes. I love my children immensely and can not imagine loving a biological child any more than I do them. As I always tell my kids..."they may not have come from my body, but they come from my heart". To me...thats a stronger bond than blood.