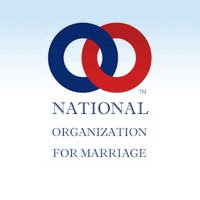 The National Organization for Marriage is back in the news (is it ever not?). This time for heading up a tour around the U.S. in a bus covered in stock photos of opposite sex families and American flags. The same great people that brought you the Prop 8 Trial Tracker now give us the NOM Tour Tracker. So far the "Summer for Marriage Tour" has been and unqualified failure marked by low turn outs. I guess without a marriage initiative to scare the pants off of people its hard to get your message out....but then, Nom had to get its face out there somehow.

In California and Maine, Nom's profile had been inescapable. They were THE driving force behind the anti-marriage equality movement. Commercials like the "Gathering Storm" set the tone for Noms tactic of scaring people into believing that gay marriage would somehow result catastrophic consequences. At the time of prop 8 in California, it was also known that the Mormon Church was also a big backer of the movement, donating vast amounts of money and..."volunteers"(wink)... to the cause. We saw the same plays repeated with success in Maine, leading most of us to gape in wonder that it could happen a second time with the same lies. Everywhere you went...Nom was there...Maggie Gallagher becoming the ever present face of discrimination against gays in America second only to Anita Bryant. But where did NOM itself come from?

While watching 8 The Mormon Proposition, I learned the answer to that and an interesting fact that was not apparent to me in the campaign against Prop 8. read on...


In the movie it was claimed, that way back in the 90's when Hawaii was considering marriage equality, the Mormons took that as a grievous threat against their faith and decided to act. However, knowing that they are unpopular with a majority of the public, they knew they had to act through others to sway the voters of  Hawaii. Thus "Hawaii's Future Today" was founded with Mormon dollars. It was designed to look like an independant coalition of diverse faiths and community leaders...except, they were all handpicked by the LDS church. All of this designed to distance HFT from association with the LDS church. The church poured money into Hawaii's campaign via HFT and ultimately shifted the balance of power and ending any possibility of marriage equality in the state. Today almost 20 years later...you still can not even get a civil partnership bill passed in Hawaii....

The film continues on to California and the beginnings of Prop 8. Again, the LDS church detected threat and mobilized. Again they attempted to create a third party through whom they could act. Thus they created the National Organization for Marriage...and installed Maggie Gallagher as president...as well as Brian Brown....both Catholics. Then they began their reign of terror. First succesfully frightening voters in California to enact a constitional ban on same sex marriage, then moving on to Maine were they not only influenced voters but helped put the question on the ballot to begin with.

I do not know if NOM continues to recieve supports from the LDS church to the same degree it does now from the Catholic Church...but I suspect it does. The one thing I do know is...

There is nothing real about them. They began life as a front group for the LDS church so the church would not be seen as participating in another states elections. NOM could not even find real people with valid concerns about gay marriage to populate their iconic "Gathering Storm" ad....they had to resort to scripts, and actors. They sell a set of lies to the public in order to influence them that gay marriage will effect them or their children in personal and frightening ways. Hell...even their dam tour bus is covered in stock photos of families, not ONE of these people  are actual NOM supporters. 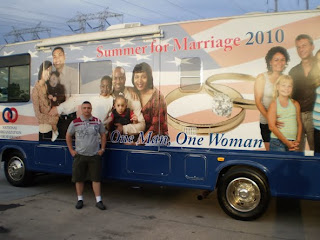 A key feature of the National Organization for Marriage is that it was meant to represent an opposing, but moderate viewpoint. They absolutely could not be seen as being controled by a religion...thought they claimed to represent those with religious beliefs. they could not be seen associating with hard right homophobic fringe groups. That means they could not just come out and say "we think gays are sick", or associate with those who advocate for the criminalization of homosexuality. They had to keep the massage the message and keep it sane in order to keep from alienating people and appearing as exactly what they actually are. They claim that they are only about "defending marriage" yet pop up to offer hysterical comments about ENDA and DADT. They resist civil partnerships whenever, and where ever, they are proposed. What does that have to do with defending marriage?

Though recently, much of that carefully crafted, moderate image has begun to slip as NOM has begun to sidle up to individuals who have gone on record as supporting reparative therapy, or individuals who make comments that gays are abominations(like their tour bus driver). Little by little their image of reasoned resistance falls away to reveal its core of discrimination and bias. Not that anyone ever believed that they were about anything else...

Is their anything about the National Organization for Marriage that is true?... Only their zeal to make sure that gays and lesbians remain second class citizens.

What can we assume now when we see Maggie Gallagher and Brian Brown stand up to deliver their talking points on this summers tour? Are we seeing NOM as a beast that now has a life of its own? or is this still the work on the LDS and Catholic Church? Whoever they represent now, they seem to be somewhat lost in the wilderness this summer and looking for anyone who will listen. You never know...they may be coming to a town near you!

To learn more about NOM:

Please go Check out: 8 The Mormon Proposition. It was an awsome and revelatory movie that I heartily recommend to anyone with an interest in the fight for marriage equality.
Jeremy Hooper of Good As You has made it his lifes work to keep an eye on NOM. They can't sneeze in a broom closet without Jeremy noticing. If you want to know what NOMs up to....look no farther.

Keep up with the Magical Mystery Tour...er... Summer For Marriage Tour at Courage Campaigns Tour Tracker.