By: Craig Rigby
As you may or may not be aware my partner Jake and I have decided to adopt. We are currently desperately trying to pay off everything we owe to anyone so that one of us can give up work when the time comes.


When we were considering children, we had to...like all gay people, make a choice. We had to choose between surrogacy and adoption. Here in the UK surrogacy is not really possible locally. It is not legal for a mother to sign away all rights to her child, she can always assert them. People who want an absent surrogate and egg donor for the child have to go to the USA. 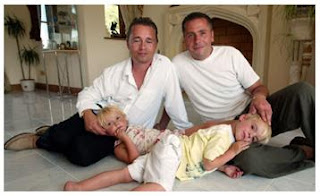 There was recently a documentary made by Channel 4 about a gay couple in the UK who first had children by surrogate and egg donor 10 years ago called “My Weird and Wonderful Family”. It followed their story as they followed the process again to add twins to their family.
I watched the program with some trepidation. I had seen Barry and Tony before in various short television interviews and didn’t know how I felt about them. They are millionaires who now live in Essex and now have five children all by egg donor and surrogate and all born in California. Their children all know how they were made and the older children had some limited contact with their biological mother before she lost interest and cut off contact.

The children are well looked after and seem very happy. They have a large house with 14 dogs (my dream) and don’t seem to want for anything, including love and attention. I chuckled when I saw that they are all very well dressed with nice clothes and good hair cuts. I am pretty sure that any children Jake and I end up with will be scruffy little buggers, I don’t buy “designer” clothes for myself so I am not going to do it for a 5 year old who is going to play in dirt… They can have 14 dogs though.

The main criticism against them in the program, and one that I in some ways agree with, is that they have a designer family. They spent time looking at eye colour charts to work out possible combinations and at one point mention possible fostering and adoption when one of their unborn children is suspected to have downs syndrome. I found this last part of the program particularly shocking. They counter the accusation with this:

“As far as buying a family, we did everything we could be have a family by other methods like adoption and fostering. It was impossible for us to do this at the time as social services were not happy having a same sex couple making the applications. So the only alternative for us was to go down the surrogacy route. To be 100% honest with you though, we actually don't care what people think!”

They have had a pretty hard time in TV interviews, especially when they were having their first children 10 years ago. Most of the questions at that time were not about the surrogacy aspect but the gay issue. Eamonn Holmes once asked them what they would do if the children reject a gay lifestyle, as though they would be out clubbing and taking ‘E’ at 8 years old....Mentalist.

Whatever I thought about Tony and Barry as people, the program did help set in my mind my own thoughts on surrogacy, artificial insemination and adoption. I am not in the slightest way conflicted.

I personally see no difference with gay men using surrogacy and egg donors, straight or gay women using sperm donors, straight couples using egg or sperm donors or straight couples using IVF. All of these things, to me, are a way of people using science and intervention to have biological children that they are incapable of having alone. I don’t think any of these people are particularly immoral. What the program set in stone in my mind, is that I don’t really agree with any of these approaches to having children. Not even, perhaps controversially, low-fertility couples who have IVF.

I have seen, both through the program and through experience within my own family, the vast amount of time, money, effort and emotional capital that are spent on all these ways of having children. I have also seen the vast numbers of unwanted, neglected and abused children sitting in care waiting for homes and families to take them in. If I was a religious man I would tell people to take the hint.

If Jake and I are turned down for adoption, then maybe I will think again about the path I would like to take, but until that happens I can’t consider any path other than adoption. It just doesn’t make sense.
Posted by GFV at 11:48 AM