Fixing What Isn't Broken...Homosexuality and Eugenics 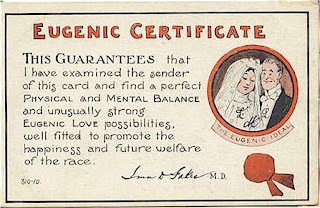 Why do we always mess with that big shiny button that says "DO NOT PUSH!"? Is there something genetic within the human species that sees something that looks like a bad idea and absolutely feels compelled to be mess with it?

I read a post recenty, via queerty, siting an article in the Bioethics Forum concerning one Dr. Maria New and her use of Drug she believes will reduce the "masculinazation" of female fetus's in the womb. The drug, dexamethasone, was origially used as a way to treat Congenital Adrenal Hyperplasia(CAH) which causes female fetuses to have ambiguous genitalia. Other symptoms may appear later in life such as:
Dr. New believes that an excess of Androgens in the womb is what accounts for the condition...The Problem? She also believes that the drug used to treat CAH can also potentialy be used to treat other forms of "masculinization" in the womb. The assertion has been made that this could eventually be put to use as a way to prevent lesbianism in the womb. Although Dr. New has made no such  DIRECT claim..what she does say certainly leads us in that direction...and the ramifications for future use of this drug a more than a little scary.

Even though Dr. New has never directly suggested that Dexamethasone be used as a way to curb potential gay fetus's, their attention to the link between Androgens and sexual identity and its control by Dexamethasone is coming far too close to leading others in that diriction, in my opinion. In a research paper Dr. New and Psychologist Heino F. L. Meyer-Bahlburg, of Columbia University had this to say:

"Most women were heterosexual, but the rates of bisexual and homosexual orientation were increased above controls . . . and correlated with the degree of prenatal androgenization.”

“That this may apply also to sexual orientation in at least a subgroup of women is suggested by the fact that earlier research has repeatedly shown that about one-third of homosexual women have (modestly) increased levels of androgens.”

I'd really like to know how they explain the other two thirds and how exactly "modestly" elevated androgens in only one third of their study group is enough to go on. But then...I'm not the doctor.

In a separate Paper Meyer-Bahlburg had this to say about the possible effects of Dexamethasone treatment on those with elevated exposure to androgens(aka gay and bisexual women):

"Long term follow-up studies of the behavioral outcome will show whether dexamethasone treatment also prevents the effects of prenatal androgens on brain and behavior.

In otherwords...those behaviors which would define them as gay.  thus we have the smoking gun...Even if they aren't selling Dexamethasone as a cure for female homosexuality, they are heavily hinting at it.

This is a bit frighting to me and Ironic all at once. I fully believe that if they could somehow, detect gayness in the womb...like magic many people who were "right to lifers" would be signing up and any babies found to have a tendency to homosexuality would be aborted. I don't know that...but it is my cynical suspicion. Two of the oldest tenents of the "profamily movement has been opposition to abortion...and opposition to gay rights. I believe those tenets would utterly dissolve with the ability to tell whether their children would gay.

Additionally, Those who appose gays often do so under the assumption that we are not born gay...This often flies in the face of very credible scientific research. We are constatly accused of "chosing the gay lifestyle". Yet, with the ability to detect a potentialy gay or intersexed baby...and the ability to DO something about it...what happens to their argument then?


However...if the language used in the statements above was too ambiguous to point to a eugenicist attitude to homosexuality, then perhaps Dr. News words to the New York Acadamy of Sciences will put a finer point on it in this quote taken from the Bioethics write up:(emphasis mine)


In a paper published just this year in the Annals of the New York Academy of Sciences, New and her colleague, pediatric endocrinologist Saroj Nimkarn of Weill Cornell Medical College, go further, constructing low interest in babies and men – and even interest in what they consider to be men’s occupations and games – as “abnormal,” and potentially preventable with prenatal dex:


“Gender-related behaviors, namely childhood play, peer association, career and leisure time preferences in adolescence and adulthood, maternalism, aggression, and sexual orientation become masculinized in 46,XX girls and women with 21OHD deficiency [CAH]. These abnormalities have been attributed to the effects of excessive prenatal androgen levels on the sexual differentiation of the brain and later on behavior.” Nimkarn and New continue: “We anticipate that prenatal dexamethasone therapy will reduce the well-documented behavioral masculinization . . .”

But wait...she's not done selling its anti-homosexualizing properties. This time at a presentation at the CARES foundation...


The challenge here is . . . to see what could be done to restore this baby to the normal female appearance which would be compatible with her parents presenting her as a girl, with her eventually becoming somebody’s wife, and having normal sexual development, and becoming a mother. And she has all the machinery for motherhood, and therefore nothing should stop that, if we can repair her surgically and help her psychologically to continue to grow and develop as a girl.”

and by now to get this handy carrying case!... AND...we'll double your order for three easy payments of only $19.95....(plus shipping and handling)

I admit...sometimes I CAN be chicken little claiming that the sky is falling. However, news like this is chilling. When it comes to certain genetic practices the public sets a very clear tone with waht they are not comfortable with. Such was the case with Dolly cloned Sheep. At that time there was alot of discussion about cloning humans and a great deal of public outcry against the notion. Ethics were sited. What is humane in the world of cloningand ethics was discussed ad nauseum. Hell...I even saw on 60 minutes last night that their are a team of paleontologists who think they can combine recovered dinosaur dna and combine it with what remains of Dino dna in birds...specifically chickens...in order to further study the evolutionary link between the two...with the possibility of recloning an original dinosaur.

But when it comes to selecting homosexuality out of the populace, who will stand up and say no? How much public outcry do you expect if this really becomes a viable treatment? All the squeemishness we feel when confronted with the idea of cloning human beings ...or making dinochickens may evaporate in the public at large when those same concepts are applied to gays and lesbians. The point missed in that circumstance would be...who's next? the developmentaly disabled? The obese? Left handed people? If you put up with it for one group of people, you open the door for it to happen to ALL people. How finely can we split the hair of what is acceptable and "normal" until we create a nightmare?

Why do we feel it neccesary to tamper with life on this level? This is not curing a disease that hampers ones ability to enjoy life. This is selecting out a group of people you don't like bacause they don't fit the "norm". While this "treatment" may not kill the individual in question...I still consider it a crime against them. And since this study was not carried out under the supervision of any medical governing body how do we know that there will not be negative long term effects?

All things considered, this made me very concerned. Let me know what you think...