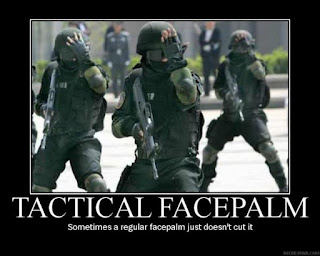 Well....remember that study the Pentagon wanted to do before it could sign off on a repeal of Don't Ask Don't Tell? Thats underway and boy is it riviting stuff. The survey sent out to soldiers has been leaked and it has some serious built-in bias. Its so bad that gay servicemens organizations are advising gay and lesbian soldiers not to go anywhere near it. So just for some saturday giggles I thought we'd take a look at what was so bad.....pour yourself a tall one and prepare for the smell of failure


About half of the 32 pages are a general queary about the soldier taking the survey and his views of his units combat readiness....very simple stuff. But not long after, come questions about whether or not they have served with a fellow soldier or commanding officer who they believed to be gay. Which seems like a very poor question to ask. Unless the soldier in question admits it...or gets caught in some manner, how is the surveyed  soldier to know if the person they suspect to be gay actually is? It seems that the "independant working group that designed this survey thinks that all soldiers have impeccable gaydar...or that suspicion of homosexuality is the same as fact....neither of these things are true. yet conclusions will be drawn on these suspicions...does anyone else see a problem here? One almost expects the next question to be to identify the person they suspected to be gay.


If Don’t Ask, Don’t Tell is repealed, how, if at all, would the way your family feels about your military service be affected?

What? I know family is a portion of morale...but really? I dont see that the opinions of a strangers family should have any bearing on the combat efficiency of a gay soldier....or his straight counterparts.

Have you shared a room, berth or field tent with a Service member you believed to be homosexual?

Probably more than you realised....

Now this is where it gets good. The next several questions ask a soldier to speculate about showering and/or bunking with gay people. Like this one:

If Don’t Ask, Don’t Tell is repealed and you are assigned to share a room, berth or field tent with someone you believe to be a gay or lesbian Service member, which are you most likely to do? Mark 1.

I'd like to add a couple of my own to the list like, write home to momma....purchase a Carbon fiber reinforced chastity belt or...QUITE OBSESSING ABOUT GAY PEOPLE IN THE SHOWER!!!!! 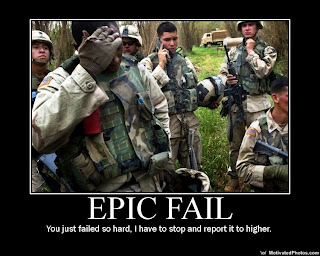 Seriously! Gay men and women have been showering next to you all along...they are showering with you RIGHT NOW and what horrible thing has happened? How insulting is it to the hundreds of honorably serving gay people for anyone to think they need to "discuss how we expect each other to behave"? Like they don't know the rules...or how to conduct themselves in a professional and honorable manner. Here the pentagon betrays its utter, childish paranoia. The operating assumptions are the all gay men are sexual predators(probably becuase straight men are projecting their own wolfishness)...as long as your a male...any given gay guy wants you. both assumptions are wrong. Dead wrong.

If Don’t Ask, Don’t Tell is repealed and a gay or lesbian Service member attended a military social function with a same-sex partner, which are you most likely to do?

I love options C and D because it means the party will be minus one, completely petty ass.

If Don’t Ask, Don’t Tell is repealed and you had on-base housing and a gay or lesbian Service member was living with asame-sex partner on-base, what would you most likely do? Mark 1.

If you are so uncomfortable around those different from you that you would actually move off base than one wonders what you are doing in the Army in the first place. After all one of the militaries biggest impacts on a young man is to expose him to other cultures and experiences outside those available to him at home....but then...I guess theres always one in every group.

All in all this survey seems to take the temperature of intollerance within the military than to queary soldiers in an impartial manner. 32 pages of "will you come unglued if you suddenly find gay people exist" seems a bit wordy to me. Isnt it much simpler to spend some time in units with gay soldiers in them and observe whats already happening? But ...its the pentagon in the guise of an "independant working group". Simple is not in their vocabulary. Especially when what they really want to do is torpedo this thing in the fasted way possible. If they were serious in their commitment to learning how best to implement a repeal I'm sure there would be a lot less "asking" how people feel and a lot more "telling" them exactly what they were going to do.