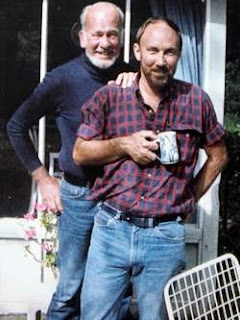 Back in April, we reported on the story of Clay Greene Vs. Sonoma County as an example of why marriage equality is an important goal for the gay community. For those of you who don't recall, Clay Greene and Harold Scull were two elderly gay men who lived together for many years, without marriage or domestic partnership, here in Sonoma County California....yet they had drawn up powers of Attorney and all neccesaary documents naming each other as benificiaries of each others estate, clearly defining their relationship to each other. Yet, when an incident occured in which Harold Scull fell from his front steps, requiring 911 to be called....all that documentation came to naught as the county ignored their relationship to each other. Clay Greene maintains that it was accident....that Harold lost his footing. The county however, claims that it was domestic abuse,siting an april 12th police report, and immediately removed both men from their shared home and involuntarily placed them into separate nursing homes....claiming that it was to protect Harold from Clay. The county then proceeded to assume control of Harolds finances, sold their home, and auctioned off their shared belongings. Harold eventually died a few months later apart from his longtime partner Clay Greene. Clay and Harolds cause was eventually picked up by attorney Anne Dennis and the National Center for Lesbian Rights, who now advocates for Clay Greene. They sued the county on the basis that the counties actions were based off homophobia and that a similar scenario would not have occured had the individuals involved been a heterosexual couple. It was a hard road for Clay Greene that has finally come to completion....

As reported in the Press Democrat , The case has ended in a settlement between Greene and the county in the amount of approximately $600,000 with an aditional $50,000 from the nursing home. Clays share of that being around $350,000.An amount which the article claims will last him the rest of his life. From the Article Clay is reported to be doing very well...

“He's very pleased,” said Greene's lawyer, Anne Dennis of Santa Rosa, who will receive half of the county settlement. “He thought he'd be dead before the county ever gave him money. And he's relieved he doesn't have to go to trial.”

He is now living in a Kenwood nursing home "surrounded by vinyards"....which leads us to the conclusion that after the horror and heartbreak, Clay is merely glad to be done with it all and that they didn't get away with taking nearly everything he ever had in life...including his love.

The county however continues to maintain that, while mistakes were made, and that they were wrong for auctioning off the mens belongings.... those mistakes were not made because of the sexual orientation of Howard and Clay, but that they did what they felt neccesary to protect Harold from Clay Greene, siting the April 12th Police report in which Harold Scull claimed that Greene attacked him. They stick to this explanation even though...after all this time...there is still no evidence to support allegations of abuse...and even though Harold never pressed any charges against Clay.

But, to be honest...do we expect them to say anything else? Perhaps this was not a case of homophobia and discrimination. Perhaps that fact that this was a same sex couple did not matter to the county workers at all. But those are big perhaps. It still did not give the county the right to reclassify their relationship as "room mates" and ignore all the legal documents they had drawn up granting each other powers of attorney. It also did not give the county the right to invalidate Clay Greene's roll in Harold Sculls life and then sell all of their mutual belongings at auction...or to treat Mr. Greene as if he was nobody....a fact which the County now admits...

The county's lawyer, Gregory Spaulding, admitted officials were wrong to auction the men's property after both were deemed unable to care for themselves

A second article from the Press carries this quote from Spaulding:

...The county's lawyer, Gregory Spaulding, maintained there was never any discrimination but admitted “procedural errors” in the sale of the property. He said the county risked having to pay attorneys' fees and other costs of more than $1 million if it had pursued the trial...

...“The county remains confident in its position that there was no discrimination in this case,” Spaulding said.. 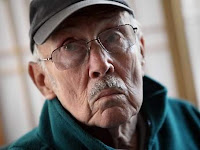 So...after the he said, she said, its up to us as the readers to take away our own determinations about the facts of this case. Both of the comments given here by Spaulding run counter to Clay Greenes assertion that he was subject to ridicule for his sexual orientation..and as the Press article details...Clay gives some very specific names. Also of note from the original posting of this story is the account of County workers going through Howard and Clay's home and picking out items they found attractive. To claim that they "didn't know" the value of the mens property doesn't ring true with me. Spaulding continues:

The error led to policy improvements at the Public Guardian's office regarding property disposition and case management, Spaulding said.

So...denying that wrong doing was done on the basis of sexual orientation, they none the less felt it necessary to make policy changes in order for this not to occur again. Great...its probably long overdue....but why change the policy if it does not contain gaping holes regarding protection of same-sex couples? This also seems to lessen the counties argument that this was not driven by disregard for the relationship these two men shared.

But the comment that most gives away the game....and makes the case for same sex marriage, is this one:

He said the dispute might have been avoided if the men had been able to be legally married or if they had registered as domestic partners. Because they weren't, their funds were viewed as separate, he said.

“Marital status played a role in what options were available to them,” Spaulding said.

What?...you mean marriage may be important to protect your rights?....who knew?....But, while true, that fact didn't give the county the right to disregard the legal documents that these men DID have drawn up specifically defining the powers they granted to each other and also should have defined their relationship to each other beyond a shadow of legal doubt.

But now he resides..."surrounded by vinyards", with enough money to last him the rest of his life. This may be as close to a happy ending as is possible since no one can give back the three final months of time lost between Clay and Howard before Howard passed away. It may not be Ellysian fields....but maybe their heartbreak and struggle will keep this from happening to anyone else...That, at least is some measure of justice....if not happiness.