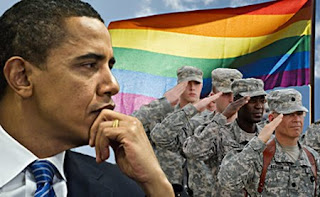 By "done" I don't mean repealed....by "done" I mean finished letting our lives be in the hands of people who don't care about us or civil rights in any sense of the word. Are we done allowing our lives to be used as bargaining chips in the power game they play in Congress?

I don't even know where to begin...The botched "deal" made by Democrats where they allow soldiers to continue being discharged so they can "secure votes".....lol...what a joke. How about the fact that prior to the vote, Joe Biden only called ONE republican senator to lobby for his vote...Obama called NO ONE and issued ZERO statements encouraging the repeal. Wheres the fierce advocacy here? Or...


How about this editorial From Jim Burroway of Box Turtle Bulletin about Harry Ried, who using the Defense Authorization bill to give mid term election candidates something to campaing about(emphasis mine):

...Those were the only amendments that Reid would allow to come up for a vote, all of which were chosen by Reid for the political advantage they would give the Democrats in tough mid-term election campaigns. His gamble wasn’t really a gamble at all. In fact, his gambit was a win-win for Democrats, at least in how they see their strategy unfolding. If Republicans upheld the filibuster, then Reid could go home and say that it was the Republicans who blocked DADT’s repeal and immigration reform. If the Dems had prevailed on the filibuster, then Reid would have been able to get the Republican caucus on record on these two issues ahead of the November elections. Either way, what Reid actually sought to accomplish was political gamesmanship, not Senatorial statesmanship...

...This was never a serious attempt to pass legislation in the best interests of the American people. It was nothing but political theater, and everyone on both sides were eager actors in the drama. All the Senators had a role to play, and everyone played to the audience. Even the White House was given a bit part. They issued a statement calling for an end to the filibuster, but according to SLDN’s Trevor Thomas, there was no lobbying behind the scenes...

The author goes on to explain that the next step is to take this bit of theater on the road...or more aptly, the campaign trail, were they can use this issue to galvanize a voter base. "Blame the Republicans" is the mantra that will be echoed come November.

But are the Democrats really that short sighted? Do they not read ANY of the blogs that have highlighted their participation in this fiasco? We KNOW the Republicans don't support us...but we all expected better from the Democratic Party. The target the American public is leveling at Washington is not leveled at Republican alone...it is leveled at them as well. All of us have been this watching very closely. We've talked for months about how the Democratic party has issued grand statements purporting to support the gay community but when the chips are down...they are nowhere to be seen....or worse, they vote just the same as the Republicans. The editorial above just proves that they don't hold this repeal as a priority. Its just a chess piece to them...and if they feel this way about DADT, how might they feel about other the other pieces of gay rights legislation that they claim to support?

I'm angry right now....I am tired of being used by people who don't give a rats behind about the good of  GLBT Americans. And I know that Republicans are no better as evidenced by Senator John McCains completely off the rails stance on this issue...from ranting that the Matthew Sheppard Hate Crimes act had no place on the Defense Authorization bill, spearheading this fillibuster, and then angrily maintaining that witch hunts are not being conducted against gay soldiers...and he used to be a moderate voice.

As it stands, this bill may come to a vote again next year in a lame duck session...but does anyone have any hope that Congress and the White House...regardless of which party is in power...will continue to do anything but make our rights a political football. I don't. Another option would be if the Obama administration chose not not to appeal the Federal ruling of DADT;s unconstitutionality...do we hold any hope out for this either?...we will see. Perhaps the courts may accomplish what Congress will not.

Until next time dear readers...but for now...a little Maddow..

Visit msnbc.com for breaking news, world news, and news about the economy
Posted by GFV at 11:14 AM