Dinner At The Leffew House 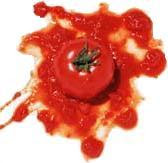 Dinner at our our house has always had  its ups and downs. Sure we had two kids who by and large were still learning table manners, but it was managable.  But not we have had our two nephews and their baby sister for almost half a year now and dinner time has taken a horrible turn. What in the heck happens to ordinary children when you increase their numbers? Its like they become an angry mob wielding sippy cups and half eaten dinner scraps.  Something has happened that has turned our once normal dinner routine into a horrific splatterfest of epic proportions.


Dinner is simple fare, most kids don't put up with anything too fussy. Everything is hot and on the table when I give the call that dinners ready. Immediately the sound of stampeding pachyderms thunders through the halls as the kids race to their spots at the table. Next, there is usually a couple of minutes in which the kids express excitement or consternation about one or more of the items on their plates before we can settle down and say grace. Having contained themselves long enough to do that, the blood bath begins...

My 10 year old son begins buy attempting to talk about his day at school and the project he conveniently forgot to tell me about, which is due the next day, ...while simultaneously attempting to eat his entire dinner in one mouthfull....absolutley heedless to the crumbs spraying all over the floor. 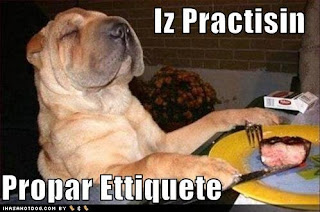 My daughter is not one to be left out of a conversation, so she begins by matching everything her older
brother says with an experience of her own while also attempting to correct her cousin at the top of her lungs for some imagined dinner time infraction. Meanwhile, all of us are halfway to being done and she has not touched her food but to drag her hair through it.

My five year old nephew is busily trying to add his own contributions to the conversation while trying ever so diligently to pretend like his green beens simply do not exist. He and my daughter have yet to earn a dessert in a month because they cannot finish dinner before everyone else is done and all the dishes are cleaned up. they take their hatred of vegetables very seriously! 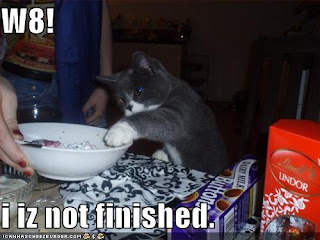 But these three are easy as pie compared to the axis of evil that are my two year old nephew and his year and half year old sister who is hereafter known as...the baby. Both are in high chairs and if I had my way, would eat in  the shower so I could just hose the messes down the drain.

The two year old is generally a good eater and not too messy. Lately however, he has discovered that there are foods he simply does not like...but he doesn't seem to realise it until he has chewed and sometimes swallowed the offending substance. I always Know we've discovered another of his least favorites by the wide eyed looks on the other kids faces. That means that if I turn around I will find him spitting/throwing up whatever it was I had given him. Then he takes another bite of it just because he likes to give the old college try. IF for some reason we make it through dinner without this, there is always finger painting in ketchup which is his favorite medium to work in and he really loves the work. 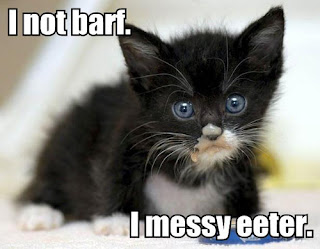 Finally is the baby. She has recently progressed from being fed bottled foods to solids and feeding herself. But, you know...all these foods feel soooo good! when squished between the fingers of your closed fist. Perhaps after living on a diet of pureed foods, she is merely trying to give her broccoli a texture she's familiar with but she doesn't eat it until its lost off semblence of shape or form. She's also a girl with solid likes and dislikes and she expresses her opinions by vote. A "yes" vote gets squished, then stuffed into her mouth for a little nibble, then taken out and squished again before she sets the slobbery mass down for later consumption. A "no" vote gets the same squish and nibble followed by ejection onto the floor....sometimes in one piece...sometimes in a spray of crumbs and vegetable bits that could only be deciphered by a forensic scientist or someone skilled in reading tea leaves.

Often, dinner with these two is a fright fest. I know something horrible has happened by the exclamations of the other kids...and like the unlucky victim in a horror movie, I don't want  to turn around. Sometimes I really just don't want to know whats going on over their even though some sick fascination compels me. Perhaps the two year old has turned into masticated banana fountain...or the baby is tastfully arranging tomato slices on the floor and sprinkling them with milk from her sippy cup....perhaps I get lucky and she's only gone to sleep in her high chair while clutching a handfull of some unidentifiable squashed fruit who's companion I will find has magically relocated down her daiper. This is a girl of special skill....if only she would use it for goodness...*sigh*

After they are done with the massacre of dinner its time to go wash up, brush teeth, and put on pajama's...

Finally the dust can settle and stick to the film of ketchup, milk, and mystery substance the kids left behind. I can take a moment to survey the damage and decided whether its worth it to conduct a salvage operation and clean up..or if it would simply be more efficient to gut everything to the studs and start from scratch. Our poor dining room floor is getting the worst of it...I'm not sure if the portion where the baby sits will ever be the same again. Sometimes I just hold my head in my hands in exhausted, flabberghasted wonder...how could any group of children make that much mess...its simply an awsome force of nature. Like tornados, amazing when viewed at a distance...terrifying when your in its path.


But after finally getting the table, mats, dishes, floor, highchairs, bibs, counters, and kids clean...then getting them all in PJ's and brushing teeth(sometimes forcibly), the day is done and I can get my nights rest in so we can do it all again for breakfast in the morning.../facepalm...
Thanks for having dinner with us. We enjoyed having you!....You may want to go home and sanitize now. I wish I could.
Until next time dear readers... 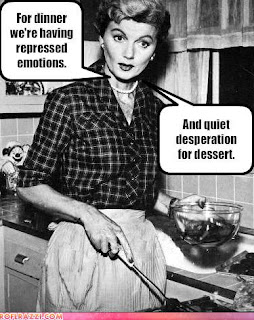