The View From Under The Bus 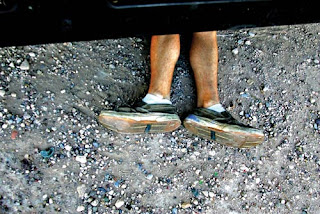 Of the goals the gay community has as signposts on the way to full legal equality, three of the biggest are:

1) ENDA the Employment Non-Discrimination Act whose passage would make it illegal to fire someone from their job on the basis of sexual identity. This one sees most of its resistance because it includes a provision for transgendered peoples.
2) DOMA....repealing the Defense Of Marriage Act which currently protects states from having to recognize same-sex marriages performed in other states stands as a barrier to the recognition of same-sex marriage on a federal level. this dovetails with the individual state fights for same-sex marriage recognition.
3)DADT....also a repeal action, giving Don't Ask, Don't Tell the ax would end the discharge of LGBT people from the United States armed forces on the basis of their sexual identity.

They are also specific items that the White House has promised to specifically repeal...as in the case of Don't Ask, Don't Tell...or promised to work toward as part of their advocacy and "change you can believe in".

Boiling them down to their essence... employment protection, military service, and marriage equality...all have the common denominator of seeking equal treatment under the law for gay, lesbian, bisexual, and transgendered U.S. citizens. No special treatments or provisions...just the ability to reap the same legal benefits from our society that our straight fellows enjoy...seeing as how we are expected pay our taxs and fulfill all other obligations of U.S. citizenship....expecting equal legal treatment is not too much to ask....but then, why is it so easy for lawmakers to throw us under the bus? Since, despite promises, it's likely that we will see NONE of these things accomplished this year....zip...zero...nada...


Remember ENDA? Its been kicking around in congress since 1994. This year was one of the most promising years to see its passage being that we had a "fierce advocate" in the oval office and a democratic majority in congress. Yet, month after month it failed to make it to a vote. Various excuses were given for why lawmakers were simply "too busy" to touch it with a ten foot pole. When the foot dragging and excuses got to be enough and groups like GETequal did a sit-in at the office of House Speaker Nancy Pelosi...then we saw a little fire under lawmakers to move. Then we saw quotes from Pelosi that ENDA would see a vote before the end of the year. Well....its now September and everyday we grow closer to the end of the year. Hopes to see ENDA passed have dwindled to nothing....especially as the elections approach and the democratic party faces the likely hood of losing its majority in Congress...and subsequently the power to get anything done.

DOMA...Our president regards as discriminatory, even though he does not support same-sex marriage. Were it not for the court cases slowly winding their way to the Supreme Court from Maine and California, this legislation would face no challenge at all...even from those who claim to be our allies.

DADT......Isn't this monstrosity gone yet? Finding people who claim they support this policy is becoming harder and harder to find. Even prominent republicans are coming out in opposition to it. As it stands, Senate Majority Leader Harry Ried....goaded on by Lady Gaga's calling attention to the issue in very vocal and very public ways(1,2)...has submitted the policy repeal to a vote attached to the upcoming Defense Authorization Bill, where it's passage is in question,  and if they can defeat a fillibuster attempt by Senatory John McCain.

But lets look at what we are really getting here. Passage of this bill does not automatically repeal DADT if it passes. The compromise language  basically says that, a repeal is possible...if...the Pentagon completes it's report on the impact of the repeal and its findings satisfy President Obama, The Chairman of the Joint Chiefs of Staff, and the Secretary of Defense. All of these individuals must then sign off on the bill for a repeal to occur. This leaves lots of room for interperation of data. Any one of these three individuals could refuse depending on how they chose to view that information gleaned from the Pentagon study...or how they can spin it. This is what we are actually getting in the upcoming vote....packaged and labeled as a repeal. There are so many weak links in this chain that it could easily end up much like ENDA...lots of promise, no result.

Add to this a recent statement that President Obama threatens to veto the bill even if it passes....if the bill contains a provision for a certain jet fighter engine, which he opposes. Now...the bill ALSO contains provisions for the DREAM Act, which the President also claims to support. The purpose of the DREAM Act...

" is to help those individuals who meet certain requirements, have an opportunity to enlist in the military or go to college and have a path to citizenship which they otherwise would not have without this legislation."

So...because of monies allocated to a jet engine he opposes, which may be included in the bill, President Obama is willing to kill the civil rights of gay soldiers and path to citizenship for young people that includes access to college and military service? What kind of repeal is this if its not even fully supported by one its architects? Does any else see this as a bad attempt to get out of passing a DADT repeal with a flimsy excuse?

And so a clear pattern has emerged. In my opinion...I don't believe that granting civil rights are a priority to our President or anyone of the members of his administration...despite strident claims to the contrary. My reason for that opinion are the tire treads on my back from the bus that is currently running us over...all so that Democrats can save a little face come Novembers election time. 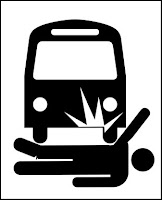 I understand that this Administration likes to build consensus. Its a meme that gets spun often. But it seems equally likely that no one wants to be seen as the one who pushed the button OK'ing a gay rights bill. No one wants to take the stand and say that whats happening to gay, lesbian, bisexual, and transgendered people is...Patently...Clearly...not right and must be stopped. No one wants to be seen leading the charge for gay rights for fear of losing the vote elsewhere...thus the drive for consensus serves as a great place to hide. Nancy Pelosi's staffers get caught making statements to junior lawmakers not to push for the passage of "contraversial bills" ....Joe Biden admits on air that gay troops are still being discharged because those where the terms of the compromise they made to get enough votes for the compromise repeal...(ugh!) The President goes on record the Doma is discriminatory, yet does not support marriage equality.....(huh?)

I sometimes wonder how much President Obama's religious beliefs figure into his resistance to taking a stronger stance on these issues. I know a certain percentage of tea partying Americans believe that the President is a muslim....but, in fact his previous place of worship was a very vocal and not-so gay friendly Christian church in his home state.  Is it possible that he simply does not want to see any of this legislation passed because it goes against his personal belief system? Whether or not this is true, I do think that this fight is not personal for the President. Mayby if he were gay then the magic Presidential pen would have long ago stopped DADT. Perhaps he would understand why ending DOMA is important when it would mean something to his life. But right now...I see a man who doesn't seem to really support the change he promised to bring.

You know...I may be stretching a bit with this...and it is not directed at particular individuals...but I think that one of the reasons that some people feel so comfortable looking down on the gay community is the perception that being gay somehow equals being weak. The same mindset that makes a young man harrass another by calling him "queer" and "faggot" in high school, doesn't go away just because he gets older and one day lands a senate seat. I sometimes wonder how much of that factor is behind the foot dragging, stalling, and sometimes outright hostility of elected officials. I'm often amazed at the fact that its still o.k. to say insanely offensive things about gay people with no backlash or consequences...some people even nod their heads in agreement. All this at a period in history when we have already confronted so many other forms of discrimination and should have learned those lessons.

So here we are at the tail end of 2010, hoping to see passage of a repeal that makes no gaurantees to us...picking up the crumbs left behind by the people who where supposed to be our friends and allies. No hope for ENDA is in sight and repealing DOMA is going to be a long. bloody, legal battle with an uncertain outcome. I'm not sure where  my vote will go in November but I know I can not bring myself to vote for a Republican...no matter how deceptive the Democrats have been. However I do not appreciate being lied to...or my rights used to ensure their place in office.

But these are the politics of compromise...of standing by and waiting politely for the world to change. It's ironic that the most effective movement on any gay rights issue is coming from the courts. I wonder what pressure the White House is feeling knowing that they made all these promises and fullfilled virtually none of them...and the reminders of those promises are steadily growing closer to them one trial at a time. Each judgement of the unconstitutionality of DOMA and DADT mocks the promises and soundbites that were made to secure their place in office. If the day does comes that these policies are struck down by the Supreme Court...none of the people who claimed to be our advocates will have the right to take credit for it. They dragged their feet...They offered excuses...They did nothing to take a stand.