Under The Cloud Of Fear

Fear is often the source of...and most common tool used in, discrimination. Many people throughout history have been the target of fear based discrimination which can seize on almost any detail of your being(gender,ethnicity, religion, etc.) and turn you into a shadowy threat working to destroy society.

In the national debate over homosexuality and its equal treatment under the law, fear is often evoked in an attempt to make us look like we are mindless monsters bent on destroying all life...dont believe me? Take a look..


Well TBN...the doctor is in...and, yes...this is gonna hurt....Tony Perkins is a prime example of a  huckster...one who willfully incites fear in others in order to advance their own careers or political agendas. They may not even believe themselves, the lies they tell the public. This is the class of fear mongers that includes people like the Rush Limbaughs and Maggie Gallaghers of the world. They present the face of reason and moderation while at the same time willfully disorting facts in order for the public to arrive at his preconcieved notions...much as Tony does from the 2:30 mark in this video where he attempts to link Judge Vaughn Walkers Prop 8 decision to banning all religious expression in America. Tony goes on to repeat the meme that America was founded on their narrow interperetation of Christianity...instead of what I was taught...which is that America was founded as a country in which government functioned separately from religion where you could worship as you chose with absolute freedom....but what do I know...

The sad truth is that Tony Perkins has the ear of those in high office and the media. During the congressional  Don't Ask Don't Tell hearings, he was asked to testify ..and also during Supreme Court Justice Elena Kagan's confirmation hearings. Tony is also a regular on the big news networks when they need to present and opposing view of gay issues in order to appear "fair" and "balanced". The fact of the matter is that Tony Perkins is an anti-gay lobbyist and has no credentials to offer an informed opinion on any of the issues he speaks to. He's a huckster...slinging anti-gay talking points out to world to convince the public that we are something to be feared...just like he did in TBN,s video above. In this case he found a religious audience already primed to accept his falsehood that gay marriage will lead to a ban on religious on religious expression. I wonder how many of those watching would be so willing to believe Tony's message if they had a son or daughter who was gay...who knew first hand what gays suffer at the hands of people like him.

The next video, from Oneman-Onewoman.org actually had its embedding disabled...likely due to the fact that its over the top and incendiary message were damaging to it's affiliate organization..the National Organization for marriage. The success of NOM's mission to stop gay marriage depends upon convincing people that they are rational and only want to "stop the redefinition of marriage". That is not now...nor was it ever the truth, as is proven by the people they associate with. In this case, Oneman-One woman, who think gays are out to promote prostitution, pedophilia, and polygamy. The video titled The Truth About The Homosexual Agenda is a disgusting attempt to categorize all gay people as monsters bent on destroying the world and turning everyone gay. How stupid is that? IN their hysteria, gone is our humanity...our families...our commitments...our love. They paint us as mindless, sex-crazed montsers. Its messages like these that often get turned into violence. And whats worse? Since we are monsters and not people, they feel the violence justified. Its amazing that there are people in the world who truly think this way. 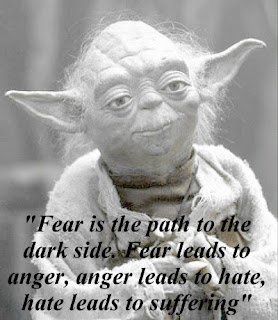 So world at large....Whats to fear in your gay neighbor? They give us to much credit for having some odd power of corruption over them. Its presumed that if your gay your automatically: sexually interested in any man you meet...no matter how unattractive. We brainwash children into becoming homosexuals leading to a massive depopulating and effeminizing the nation all in one go. We're going to detroy marriage by virtue of assimilating into it and therefor unraveling the structure of the family. Were taking over Government, the military, and the media. And of course...we are gay so we obviously have no spiritual beliefs therefor we must also be out to eradicate religion.....Did I miss anything?
somewhere in America, someone is sitting down fretting about the threat of a gay agenda enough to lose sleep over it. Why is that? Why is the evidence of their eyes not enough to show them that gay men and women just want to live lives free of persecution? We are your family, your neighbors. We have families of our own and dreams for our lives....in every sense, we are just people.
Perhaps Yoda was right when he said fear leads to anger..then hate...then suffering...That negative emotions like fear are quicker to flow than positive ones. Perhaps because anti gay voices appeal to that part of our brain that is older than language or civilization. Their messages of fear cut right passed our emotions and logic into the animal part of our brain that sees a threat in every shadow.

Only one thing is for sure...Fear can be usefull when it keeps us from doing something stupid and potentially fatal...but it can also hold us back if we allow it to dictate how we live. If more of the people watching TBN knew actual gay people ...would they give Tony Perkins the time of day? If more gay men and women come out...tell our stories and help the world understand who we really are then dont we alleviate our own fear of a world hostile to us by helping to remove the fears of others and thus help bring about the world we hope to one day see? no more fear...no more anger...no more hate...and most importantly, no more suffering. 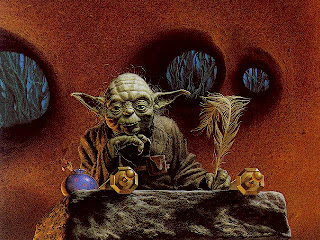 Michael Whelan's Yoda
Posted by GFV at 9:06 AM