Happy 40th To My Husband 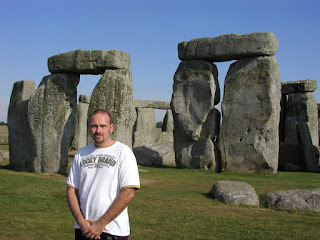 Yes is true! My husband Jay turns the big 4-0 today!

How to you show your love for someone who has given so much of himself to his family, who has put up with my crazy behind through thick and thin. He is my best friend, the person to whom I can tell everything(no matter how crazy) and even if he doesn't understand...he listens. He has done his best to put his family first, oftentimes in place of his own needs. I knew from the moment I met Jay that he was someone special....and then one day, a kiss cemented that forever.

Now, here we are almost fifteen years later. We've adopted two amazing children and taken on three more. Our lives are filled with things that have to be done yesterday. Some days we are running with the needle on empty...but running anyway. But its sometimes life puts your blessings in perspective for you...

(is that Ricky Schroeder from Silver Spoons?...nope...that is Jay(left), age 10, and his mom, older sister, and younger brother) 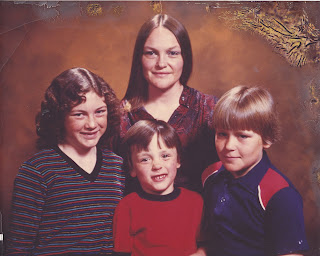 As many of you may know from Jays last family update video on YouTube, Jay recently had a health scare. He had been extremely  fatigued and depressed for a few weeks when he discovered a hard walnut sized lump on his neck right under his jawbone. What you don't find out from the video is how many deputies in Jays department have developed sudden cases of Cancer...one who died very suddenly from a tumor on the brain no one knew about. So we both feared the worst. Jay was his ever stubborn self and refused to go to the doctor until I badgered and threatened him enough. I don't think he wanted to face that he might have had something as dire as cancer and putting off the doctor meant putting off acknowledging it. Finally he relented and made an appointment. Thyroid infection was suspected and we both breathed a collective sigh of relief. Blood tests were taken and we expected all to be well with some meds.

Our doctors office called to talk to jay  without saying why and after a blood test thats enought to freak anyone out. The spector of cancer returned again as both of us sweat bullets until we found out why they called. It turned out all they wanted was to remind him to re-up his hepatitus vaccinations!...ARGGGG!! we both had assumed the worst! Why do they DO that?!

(above)Jay during his military days stationed in Hawaii. What a hottie! (below) Civilian life after the army. Being a young man coming to terms with his sexuality... and nice legs! 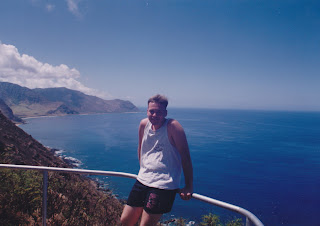 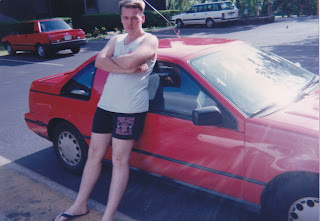 What made all of this harder for Jay was remembering when we was young and never expecting to reach his 40th birthday. The young man who summoned enough courage to attempt suicide on a rural county bridge never thought he would make it to see this day. Now he has a husband and family....and his fortieth birthday is on the horizon...and then this happens. It scared the heck out of both of us but none so much as Jay himself.

On this day when we celebrate the day that Jay was born into the world, it comes with the realisation that it has been a hard road getting to this point...and that there were some times when he came awfully close to not being here at all.

So today is Jay's birthday...and a really big one. It feels a little like my birthday too because he DID make it to forty and I get to be here with him to see it. He may not feel his best right now....whatever has got him hasn't passed yet. But I hope he knows how much his family loves him...how crucial he is to all our lives, and that losing him would leave an irrepairable hole in our lives. I would not be half the man I am today were it not for him.

Jay and I when we had just started dating in our 20's: 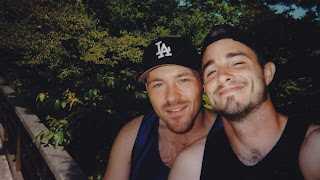 He is not only my husband, the man I love...but also my dearest friend. Sometimes we drive each other insane. We often don't see eye to eye on many things being that we approach the world in totally different ways. However, My life with him is my most valuable possesion and I can't imagine my life any other way. I look forward with hope to forty more years and being grouchy old men together.

P.S. As a part of celebrating his birthday...Jay, I, and the kids will be taking the weekend off in Las Vegas! Believe me, what happens in Vegas, will not stay in Vegas and we will fill you all in early next week when blogging resumes. 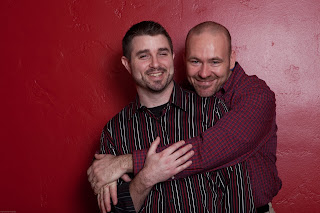