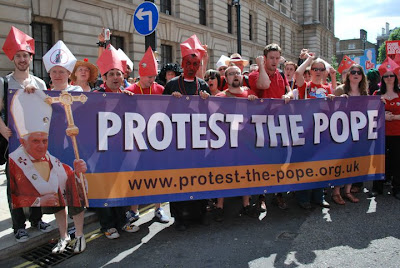 By: Craig Rigby
It is almost here! The Pope is coming! On Saturday the 18th of September he will be here, in all his splendour. It will be the first time since the 80's since a Pope has been to the UK. It will be the first state visit and only the second visit overall for hundreds of years. I, and several thousand other people, fully intend to remind the catholic church why they stopped coming.

There are two reasons I, and many other people, intend to protest his visit. Firstly this is a state visit. That means we, the British taxpayers, have to pay for the whole silly affair. Now, as a citizen of Europe and the leader of a large religion the Pope should, of course be free to tour our country. But why the hell should we pay for the privilege?

Secondly while the Pope should be free to come here, he needs to realise that this is a free country and that many people are unhappy with his views. To me, many of these are vile, repugnant and evil. I think he needs to be confronted with this.


The Pope is the head of a state and organisation that has been responsible for opposing the distribution of condoms and so increasing large families in poor countries and the spread of AIDS, denying abortion to the most vulnerable women, opposing equal right for gay people, as well as covering up and enabling child abuse.

The Catholic Church is a vociferous interferer and critic of foreign governments. It never hesitates to apply political or financial pressure to further its agenda, even in non-Catholic countries like the UK. Take as an example last weeks adoption appeal. The Diocese of Leeds charitable wing, Catholic Care, wanted exemption from new anti-discrimination laws so that it could limit services to gay people on religious grounds. They had been hoping they could develop a test case. 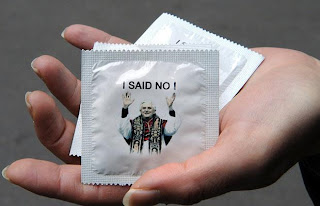 The adoption system in the UK is run by a regulated network of local government and adoption charities. A local authority will typically have custody of children (placed in foster homes) who have been removed from, or given up by, their biological parents . A charity, or other local council will then act on behalf of prospective parents who it has vetted and will try to join everyone together. This second charity or local authority then acts to secure the adoption and support the process. Catholic Care is one of these charities, assessing and acting on behalf of prospective parents.


The Equality Act 2006 forced all agencies involved in adoption to consider gay couples as parents. Catholic Care and The Diocese of Leeds (who runs it) say that The Equality Act goes against the church’s teachings on marriage and family life. The charity had sought to carry on discriminating. They said this before the courts:

"[The charity] accepts that to carry on as before involves discrimination but says it is merely a justifiable means to a legitimate end, namely that of securing homes for children who could be expected not otherwise to find homes at all."
If not allowed to do so the charity "conceives that it will have to give up its adoption services in their entirety and this will operate to the detriment of the children who would otherwise have found a family".

In reply the charity commission (to whom they were appealing) replied that “gay people were suitable parents, and that ending the charity's adoption work would not harm the interests of children.” I fully agree. For a start it seems like Catholic Care only helped rehome about 10 children a year. The parents it helps to find children will easily be able to find another agency to take up their case.
What the Catholic Church was seeking here, as in so many other cases, was special treatment under the law. As the Popes own words from earlier this year betray, they see it as an injustice that they are being required to operate under the law. For no reasons better than their own antiquated tradition they wanted to be able to treat certain individuals in a sub standard manner. Imagine for a second that they were trying to deny service to black people because their tradition said that black people were immoral. How much public sympathy would they get then? People are born black and people are born gay. Religion can't be an excuse to discriminate in law. 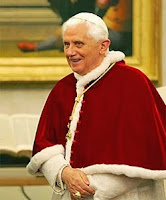 Not everyone agrees with the Protest the Pope campaign however. Today the Lesbian and Gay Christian Movement spoke out against the tactics used. The LGCM has said:

“The Protest the Pope coalition of secularist groups has opposed the trip and promised noisy protests, but progressive Christians believe that this is unhelpful and counterproductive."

Instead they plan to hold a prayer vigil instead of a protest to show the Pope how his words affect real people. Perhaps there is something to be said for catching flies with honey instead of vinegar but I don't think it will work in this case. The trouble with the Pope (and religious figures in general) is that they think they should have a privileged status for their opinion just because it happens to be a religious opinion. The Pope needs to be shown, if possible, that not everyone believes what he believes.
At the end of the day I think that any protests will more than likely convince the man that he is right, that the UK's secularist tendencies make it dangerous and evil. But I have to join then and speak out. Staying silent in the face of such a horrid little man is the worst option imaginable.
Posted by GFV at 3:35 PM