There have been a couple of studies of gay people published this week and I wanted to go over them here on the blog. One was a study by the office of national statistics which for the first time asked a random sample of people their sexuality, the other was a consultation undertaken by the BBC to find out how it is doing on gay issues.

BBC told to be more realistic:

The BBC recently commissioned a wide ranging study into its own portrayal of gay people on the corporation's various media. The study followed a raft of controversies over its coverage of homosexuality. The best known of these was an online debate stupidly titled "Should homosexuals face execution?".


The research was started in April, more than 2000 adults were questioned in audience research and a further 9000 (included me) responded to a public consultation. The study itself was in part controversial because groups openly hostile to gay people, churches and other right wingers, were targeted along side gay people as part of the public consultation. I noticed that the BBC did not do this when consulting on its output relating to black people.

Here are some of the results:

The opinions of straight people were detailed extensively in the results. The majority were comfortable with seeing gay people on TV but they were less likely to be concerned with unrealistic portrayals.

18% of people said that they feel uncomfortable when seeing gay people on TV. This 18% reported that it was scenes of physical and emotional intimacy which cause the most problem. This number is higher than I would have expected. It means that almost one in five people doesn't like it when they see gay people on the television, hopefully these are all older people.

70% of people felt that there is insufficient portrayal of LGBT people. Bisexual and lesbians in particular feel underrepresented. LGBT respondents wanted to see fewer stereotypical portrayals of gay men. News was also cited as an important area, saying that care should be taken to ensure people's sexuality was mentioned only when necessary. In drama, LGBT respondents said that they said they wanted to see realistic storylines about gay relationships, and ones which did not just revolve around characters' sexual orientation.

One in ten people said there was too much portrayal of gay people on the BBC. This means that 8% of people feel uncomfortable when gay people are on TV, but don't think it happens too often.

Overall the majority of respondents (gay and straight combined) said that they were happy with the portrayal of gay people or did not feel strongly about it.

I personally agree with the majority of gay respondents, I think the BBC does need to do a bit better but it's doing okay in the round. There are jokes about gay people on the BBC that would never have been made about black people...and gay characters in the flagship soap opera Eastenders are never happy in their sexuality. Many respondents thought that Channel 4 had been more groundbreaking in its treatment of gay issues and I completely agree.


In general, respondents wanted integration of the gay and heterosexual "worlds" so that sexual orientation was less of a talking point, and more an identity "to reflect in the mix". The BBC has promised to go back and look again in two years to see if it has improved so we will know then. 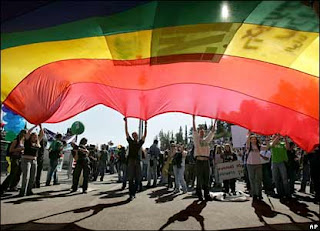 This was the headline splashed all over when the Office of National Statistics reported the findings of its first sexuality survey. It isn't really accurate, it should more properly read “1.5% of people are willing to say they are gay to a random survey”.


The ONS added the question to their Integrated Household Survey. People aged 16 and over were questioned about their self-perceived sexual identity, and asked to respond with one of four options: heterosexual/straight, gay/lesbian, bisexual or other. 95% said they were heterosexual, 1% gay or lesbian, 0.5% bisexual, 0.5% other, and the remaining 3% either did not know or did not answer.

Stonewall welcomed the release of the figures but suggested the real figure for people who were gay, lesbian or bisexual could be higher and I agree with them. For a start one day later the gay personals website Gaydar came out and said they had 2.2 million active users. 2.2 million is 6.7% of the total UK population.

Now in all likelihood some people on gaydar have more than one account but even taking that into account it goes to show that the 1.5% figure can't be right. Even to suggest that every gay person in the UK has a gaydar account would be stupid, I certainly don't, I doubt even half do. The 1.5% figure doesn't even cover the number of gay people that attend the various pride events that happen across the country. Lets hope that the government sticks to its official 6% estimate.

I don't blame the ONS for asking the question, I think it just goes to show that when suddenly asked by a stranger in an official settings to state your sexuality a great many people lie, and that in itself shows how far we have to go.
Posted by GFV at 12:22 PM