Another Step Along The Road ...Argentina. 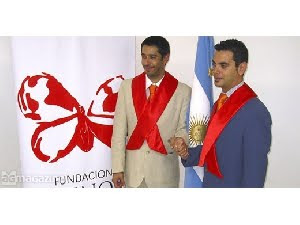 After crushing defeat in the struggle for marriage equality in the Live and Let Live State of Maine, it good to see that other countries are still moving forward while we baby step to equality. Argentina Has taken its first steps to full and lasting marriage equality for its citizens. According to an online report at Inquirer.net, Argentine Judge, Gabriela Seijas, ordered ordered the Civil Registry to legalize the marriage of Alejandro Freyre and Jose Maria De Bello. The couple, who had been previously denied marriage on the basis of their Same-sex status, lead them to file a legal complaint on the basis of gender discrimination. According to the report, it is hoped that this will ad extra pressure to pass a gay marriage bill slowly making its way through Argentine Legislature.

Reading this puts me in mind of the day San Francisco Mayor, Gavin Newsom, ordered city hall to begin issuing marriage licenses to gay and lesbian couples. That action was swiftly blocked by opponents to gay marriage, but it formed the basis for the legal and electoral battle that followed...including state sponsored discrimination in the form of Proposition 8. however, If not for Mayor Newsoms courage in action, I would not be married to my husband today. Those first tiny pebbles became the landslide that is still changing the greater landscape of gay rights in America. If Argentina succeeds in granting its GLBTQ citizens marriage rights, they will be the first Latin American nation to do so.

One mans act of conscience now is echoed in the actions of Justice Gabriela Seijas of Argentina. On the subject, Justice Seijas had this to say of her decision:

Seijas deemed that "the law must treat everyone with the same respect according to their particular situation" and declared unconstitutional two articles of the civil code, including one stating that marriage is only between a man and a woman.

You would expect, at this point that the Catholic Church would raise its head and put its influence into the debate. You would be right. Argentina, like many Latin American countries has a large Catholic presense. So, of course, Catholic Bishop Baldemoro Martini asserted that: same-sex unions do not contribute to the public good; they put it especially at risk. ...you know, because religious sponsored discrimination is totally good for the public...*eyeroll*

As the original posting points out and American experience demonstrates, court rulings can always be appealed, and quite often are. Though it seems the Government of Buenos Aires has no plans to appeal the rulling. At the Buenos Aires Herald, City Mayor Mauricio Macri is quoted as saying:

this is an important step, because we must learn how to live in freedom without hurting the rights of others.... We must cohabit, and accept this reality. The world is heading toward that direction

Macri added that the decision was the result of an important internal debate, through which he wanted to improve the liberties of the citizens.

the law should treat everybody with the same respect, regardless of their singularities, without the need to understanding and regulating them.

Wow...a politician that wants to make peoples lives better and a Judge willing to take a stand for equality without concern of the backlash?! I want a picture of these guys to put next to my pictures of bigfoot, the Loch Ness Monster, and Elvis.

We here at GFV have a wonderfull Argentine reader who has been helping keep an eye on developments their. Her comments have given us an insight that we would not have achieved through any news outlet. Even though the article here express a great deal of foot dragging in passing marriage equality legislation, her take on it has been decidedly more positive. Much thanks goes to Christina for keeping us informed.

As promised, I'm here to tell you how is treating the law allowing gay marriage in Argentina.

Yesterday, Thursday, 5 November, was the second hearing and again there was testimony and talks on the subject. The ruling party called for a recess to discuss the situation at the supporter and will meet again next Tuesday. The ruling party, on December 10, will lose some seats in Congress due to adverse elections on June 28. Anyway, this project seems to have the support of several parties, but really is trying to be approved before December 10.

Congratulations Alejandro and Jose! and congratulations to the people of Argentina! May your example help other nations see the value of treating all people with respect and dignity. Hopefully soon other countries, like Portugal, will soon follow your lead.