Is this how YOU feel right now?...I know it has been for us lately. I see so many people working so hard to help advance the cause of gay rights, from those who gave of their time to work phonebanks or stump door to door, to those who used whatever means the web can offer. So many of us poured our hearts and souls into California's prop 8 fight and the recent fights in Maine, Washington, and Kalamazoo. To face defeat in Maine has left me feeling like horrible sense of deja vu and like a light is going out in the world.

But now that the dust has settled everyone is looking for someone to blame. Some place that blame on the religious, others on soccer moms, HRC, And..most appropriately, our President. However, the most concerning finger pointing is directed right at us, the gay community.

All of us are sad/angry/disappointed/outraged....and maybe feeling a little soul weariness at having to fight again and again, not only against hatred and bigotry...but also to encourage others to help out in the fight. Yesterday Jay and I made a flurry of videos in our hightly emotionaly charged state. In those videos we took a few people to task for there total invisibility In ANY of the gay rights battles that have taken place across the nation.

Leaving DaveyWavey out of this, One of the individuals we called out was Ellen Degeneres, not as THE example but as just ONE example of celebrities and politicians who did NOTHING to help in Maine. The full video can be found on YouTube. We know we are not the only people to point this situation out. And to those who DON'T think what happens with marriage equality is a big deal...tell that to these gentlemen. 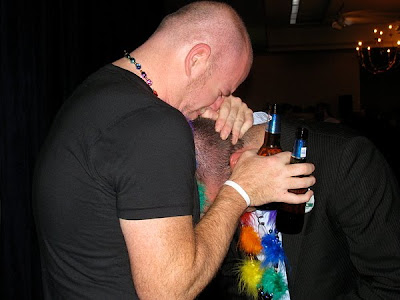 All of us know finger pointing isn't going to fix Anyone's problems. But if we can't analyze where we failed and speak honestly and truthfully about it then we will be doomed to repeat this heartbreak in state after state. Looking to our own community and wondering why there are those who just don't care unless the election was held at a circuit party is a valid question to ask. And I think Its born out by the comments left on our videos posted on queerty.

Jesus, this isn't going to appeal to anyone. Not the gays and certainly not the conservative right. I'm uncomfortable watching them…and leave Ellen alone, she's done loads!

My answer is...Show Me....My memory is not so short and I remember Ellen did nothing here in California until the eleventh hour. She was completely silent about Maine, Washington, and Kalamazoo....how much good could her talk show have done if she or her producers weren't so afraid of losing the soccer moms? Aren't they the very people who we need to reach out to?!

the fun parade rolls on:

can someone please post a cliff notes version, they weren't shirtless, nor wearing spandex squarecuts, nor dancing to Britney… so it was way too boring to watch. :p

And this from our "King and King" video:

Nice. But I wish it had more f*cking

then the tide of comments began to change...

These comments make me ashamed to be gay. No wonder we aren't respected.

What we need to do is mimic the Washington situation across the country. To be perfectley honest I don't give two shits about the term "marriage". I want the exact same rights and benefits that straight couples are entitled to and enjoy.

Really?...and I suppose you wouldn't mind using that "gays only" water fountain either then. We wouldn't want to contaminate the Straight one.

You can flame away, but MAINE DESERVED TO LOOSE. As did us Californians. The folks in charge keep running these god damn polite, gentle "please don't hurt me" ads while the opposition uses powerful scare tactics. Until my fellow faggots can stand up for themselves, they don't deserve civil liberties. Grow a pair, or shut the fuck up.

why are we no longer rioting? The LGBTQ movement has become a bunch of wimps asking politely for rights. Politeness has NEVER worked

so the tone of our conversation begins to change...I am a big advocate of what we do to others comes back around to us....I don't advocate rioting...that's an incredibly destructive way to handle civil matters...scaring people into doing what you want is nothing other than extortion. but I DO think Its time to take the gloves off and grow a pair as the previous commenter expressed. That's why I did my video, rewriting the Declaration of Independence from a GLBTQ point of view. NOT because we need to succeed from the union but because the same emotions and intentions that drove our founding fathers drives many of us in the gay community today. Its time to rethink our strategies in claiming our rights...not asking...claiming what is already ours by right.

As this poster insightfully points out:

But this is not a majority rules all society. Sometimes, what the majority wants doesn't matter. We have a Constitution and it says that all of us are equal. That's where we need to focus the fight. Like abolishing slavery, this is a fight that will first be won in the Courts and in the street, not at the ballot box. The Constitution exists to protect minorities (yes, we are one) from a tyranny of the majority.

This poster is so right...Reacting to the conservative rights attacks at the ballot box is a losing battle. We need to be addressing the fact that voting on civil rights is basically an unconstitutional action to begin with. By getting caught up in state by state ballot measures we keep dancing to their tune.

So when we are done...blaming Ellen, blaming Barrack Obama, blaming ourselves, we need to lick our wounds and remember what binds us together is stronger than what divides us. I hope that we can all see the importance of standing together..even when our goals may not be identical. For some...enda is the most important goal to achieve...for others it may be California's marriage rebid in 2010. Whatever we are working toward, we need to get off our asses and start acting like a community. It is o.k. to lend support and encouragement to others...even if their fight isn't even in your country. If we can help each other...we all win.

This Is my Theme song for gay rights and gives me the title for this post.I love Samantha James to little bitty glittery pieces...but more importantly, the sentiment rings true...