Most of you know of our view when it comes to gays with large audiences not using their influence to help advance the struggle for gay rights. We Called out Ellen and gay YouTubers for not standing up for gay issues when it really counts. And now, to perfectly highlight this issue, along comes Adam Lambert.

For those who haven't been knee deep in gay blogs all month, Adam Lambert has recently been in conflict with OUT Magazine. Follow the saga with me..

First Was his near refusal to be on the cover because OUT was apparently too gay....*snrk!*...Hold on...trying to contain my laughter while writing this...Out had been making many overtures to get Lambert on the cover, all of which were ignored or rebuffed. Adam finally assented,.. as long as there were straight people also on the cover with him. Recently Adam had also been on the cover of Details Magazine Licking a Woman's breast....And I thought his breast feeding days were looooong over.... 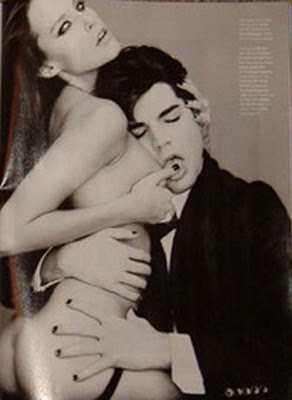 Seriously Adam...the breast thing?...straight people on the cover?...you wear more makeup than Liza Minnelli...We know your gay! The whole world knows it and all these efforts to make you look less gay...or even pansexual, aren't workin'. They are only making us lose respect for someone we really want to like.

As posted in Queerty, Shana Naomi Krochmal, Who interviewed Lambert for OUT, had this to say about the interview...

Despite plenty of back and forth between the magazine and the label about the cover and the photo shoot, I still wasn't prepared for what happened when I showed up at the 19 Entertainment offices for the interview. I briefly met Adam, and then the publicist and I walked out to the balcony, at which point I was cautioned against making the interview "too gay," or, "you know, gay-gay." Specifically I was discouraged from asking about the March on Washington that upcoming weekend or other political topics. I pointed out the difference between the Advocate, Out's sister newsmagazine, and Out, which is more broadly a men's fashion and lifestyle book, but obviously made no promises one way or the other. It was pretty awkward, as if we were discussing two totally different people — an Adam who doesn't seem to have any real filter when talking about his life or his opinions, and an Adam who could somehow be contained, made safe for mainstream America.

I think its funny that everyone on that cover is/has spoken out on the subject of gay rights, except for Lambert. Cindy Lauper alone has been to more pride festivals that I will ever attend in my entire life as an out gay man. So, yes you can speak out and have a succesfull career...just ask Lady Gaga,...if you can find here through the bubbles.

In That same issue of details Aaron Hicklin, Outs Editor, posted a letter taking Adam to task for distancing himself from his gay fans and offering the false illusion of heterosexuality. What was Adams response? Posted again by Queerty, Check his tweeet...

"Dear Aaron, it's def not that deep. Chill! Guess ya gotta get attention for the magazine. U too are at the mercy of the marketing machine. Until we have a meaningful conversation, perhaps you should refrain from projecting your publications' agenda onto my career."

And an an Entertainment Weekly interview, Lambert is quoted as saying:

What people don’t realize is, I AM MANAGING MY IMAGE, more than maybe the editor of OUT magazine likes to give anybody credit for. My team is a team. And I really feel fortunate that 19 Management and Simon Fuller said to me, from the get-go, “We want to do what you want to do....

...It was my desire to stay away from talking about certain political and civil rights issues because I’m not a politician. I’m an entertainer. That is not my area of expertise. I can talk about relationships and personal experiences because as an artist those things involve writing lyrics and that part of my process. But I didn’t feel comfortable talking about the March on Washington. I didn’t feel comfortable, so I asked my publicist to ask the interviewer to stay away from the political questions. I take full responsibility for that. I think that the editor has his agenda and has his opinions, which I respect, but they’re not necessarily my opinions. And I wish there was a little respect for that. Not every gay man is the same gay man.

Are you a gay man Adam? You are sure doing your level best to convince us otherwise. And while you don't have to be a politician or politico, you are a human being and they are allowed to have opinions about topics that effect their lives. Unless of course, they are too frightened of losing appeal to a straight fan base that...ALREADY KNOWS YOUR GAY!!! Come on Adam! They would have figured it out even without the drag pictures that got released during your Idol season.

The point is Adam, Ellen, and gay YouTubers, no one is asking you to become an activist but you can still help those who support you everyday without believing in the same things they do. Protecting your career from straight backlash is like trying to hold back a tidal wave with a wetnap, it will overwhelm you eventually, no matter what you do..but by then the gays will resent you too.

If this leaves any doubt that it's Adam distancing himself from tackling gay issues and not his media handlers..then I don't know what will convince you. BUT....Just like Obama moves on gay issues when the public threatens to cut off the cash flow...so too does Adam Lambert seek to affirm his gayness after being criticized...albeit in a rather peculiar way...onward to the AMA's... 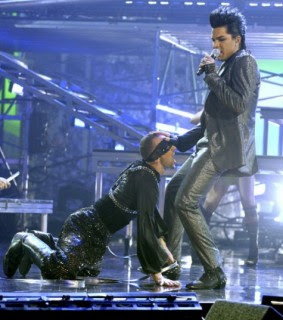 The Video's have been pulled from Youtube now, so we can't show you first hand, but Adams performance was an attempt to reclaim his homosexuality..no doubt about it. Queerty's report pretty much sums it up. Men on leashes getting their faces ground in Lambert's crotch and kissing his keyboardist....*yawn*...sounds like Madonna's "Truth or Dare Tour".

ABC's audiences were shocked though, and made sure the network knew about it. So much so that it made The View and all his subsequent appearances on ABC have been tentatively canceled by the network.

Completely ignoring Elizabeth Hasselbeck's condemnations, the performance itself is no different than any other "straight" female star has done....but once its two men every ones collective Sphincters tighten.

My issue with this is not Adams performance. There are those who think that we should NOT endeavour to fit in/copy heterosexual society at all and thus won't tolerate any critisism of Adam's performance. While I have my own feelings on that topic...that will have to be left for another post. My issue with this is, Why did he need to make his statement this way? I don't believe this was his artistic muse carrying him away. This was Adam Lambert flipping the bird at OUT magazine again. As if to say "I am too gay! Just watch me!" As a consequence, rather than endearing himself to a broader public...which he seems to want...he just pushed them all away. Wouldn't it have been easier to give a couple of blurbs to OUT magazine and be done with it?