Spreading The Light...Uganda and America's Fundamentalists 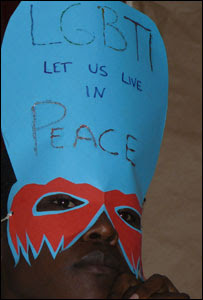 Not so long ago, America's largest export used to be things that we had built with our own two hands. However, these days, we export ideologies more than products.

Our latest gift (/sarcasm off) to the developing countries of the world has been through the efforts of christian fundamentalists, who are again turning to African and Asian countries to find new believers and to advance their causes. A big goal of the American churchs, is to put gays back in the closet...or worse.

It has already been posted in comments on this blog how much the exgay movement in the U.K. owes its funding to American evangelicals here in the U.S. These churches sure seem to have inexhaustible funds to be able to support these oversees efforts AND resist marriage equality back home. Now there most recent efforts have put them in bed with some nasty bedfellows.

Many people may be aware of Uganda's recent drafting of a bill to criminalize homosexuality...ANYONE caught having sex would receive a minimum sentence of life imprisonment. In addition, if One partner has HIV or is under the age of 18, then the crime becomes "Aggravated Homosexuality" and could be punishable by death. The bill also requires Ugandans to report anyone they know to be homosexual to authorities within 24 hours of their finding out or risk up to three years in jail. The bill, backed by Ugandan President Yoweri Museveni is working its way through Uganda's parliament.

You would expect tremendous rounds of international condemnation for such a law would you not? There have been many outspoken International voices against it. For example, Canada and France have flatly denounced the bill as a human rights violation. However, where is America in all this?...The tiniest voice of all. Joann Lockard, the United States Public Affairs officer is quoted as saying:

"If adopted, a bill further criminalising homosexuality would constitute a significant step backwards for the protection of human rights in Uganda. We urge states to take all necessary measures to ensure that sexual orientation or gender identity may under no circumstances be the basis for criminal penalties, in particular executions, arrests, or detention."

While America has not been silent in condemning their actions, neither has it been at the for front. And just why is America so curiously withdrawn on the issue?...Because American religious groups back this bill. While some of these religious groups do not outright support the bill, they support those who drafted it and work with them on various missionary projects in Africa...Which reeks of tacit support to me. Some of these groups are very close to our president. One such example is Pastor Rick Warren of Saddleback church, who spoke at President Obama's inaugural speech. A recent Queerty article outlined the intentions of Catholics and Evangelicals alike to turn to other continents to shore up a membership that is slowly dwindling in the U.S.

This by itself would never concern me as its been happening for ages. What does however, is that organizations like Saddleback Church, that proclaim to spread the word of love, not only actively work to restrict civil rights for GLBTQ Americans, they ALSO have no problems getting into bed with governments that practice genocide...and all in the name of "morals".

Now...Rick warren really got the brunt of coverage from Queerty for his refusal to denounce Uganda's law. I think focusing on him is to miss the bigger issue. Surely he is not the only one to look to and you can bet that the Catholic church is lurking somewhere in the background in this sordid little affair.

Warren is quoted as saying:

"The fundamental dignity of every person, our right to be free, and the freedom to make moral choices are gifts endowed by God, our creator," says Warren in a statement. "However, it is not my personal calling as a pastor in America to comment or interfere in the political process of other nations."

Well Pastor Warren...You can't pursue freedom if you are spending you life inside a jail cell...or worse, dead. How are gay Ugandans freedoms being honored here?

But we are sure that was not the intention of your statement. Its the freedoms of Uganda's government to pass whatever law it choses that you reference. So then, why don't we next put foreign missionaries on the list of those worthy of life imprisonment or death and see how you fast you move to condemn Uganda's actions then.

This is not the Christianity I was raised to believe in. The Christianity I was raised with would have demanded action to defend those who can not defend themselves...even if you consider them a sinner. It called for mercy, not death. All faith leaders should be standing up to roundly condemn this law which hearkens back to the days of Nazi Germany. But I reckon, since it targets gays, they will remain silent.

How did this law come to exist in the first place? Partly because Uganda is looking for someone to blame for skyrocketting HIV rates and the gays make an easy target. The "blame the gays" tactic is as old as time and still sadly ignores the truths about how HIV is spread and who is actually affected by it. Nor will it stop them from accepting aid money from the U.S. to combat HIV by killing gays. So it will continue to be an epidemic in Uganda, even if all the Ugandan gays were rounded up and forever banished. However, we know that reasoning won't matter a bit to Ugandan leaders...nor to the Evangelicals that are looking to their country for new believers and support in their fights back home. It sounds like a case of "you scratch my back, I'll scratch yours"...just don't like it too much or I'll have to put your homo butt in jail.

So to sum up..We've funneled weapons to Afghan rebels in the old soviet days, we have propped up countless dictators around the world including Saddam Hussien and the Taliban when it suited us, and now we are tacitly supporting anti-gay genocide and promoting ignorance about the causes of HIV in countries that can ill afford that attitude. I thought we were supposed to lead by example?...not support the evils of the world.

For those who wish to follow this further I have found a anonymously posted blog supporting GLBTQ Ugandans that is written by a Ugandan. Read up at: www.gayuganda.blogspot.com
Posted by GFV at 11:46 AM