The People We Trust. 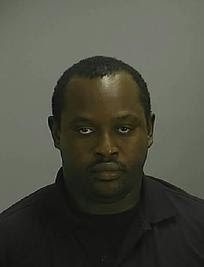 This looks like an honest face right? One you'd trust with your children? This Gentleman is Randolph Forde, a 10th grade teacher at Mundy's Mill High School in Jonesboro Georgia. Mr. Forde is under investigation by Clayton County school officials for,...get this... physically threatening a student and "Putting a hit out on him". All of this after Mr. Forde questioned a students sexuality and later threatened to hit him In th f-ing mouth!.

After all the fuss about how gays are infiltrating school systems and forcing a homosexual agenda on innocent children. Anti-gay pundits raised the mantra Its all about the children!. Indeed it is...the right for alll children straight and gay to go to school in safety. I think everyone needs to remember this story when California goes to reelection over gay marriage and the Anti-gay spin doctors pull the same tired arguments out of the closet about how its the homosexuals who are the threat.

The threatened student remains anonymous but the allegations claim that Mr. Forde pulled him out of class and interrogated him about his sexuality. The next day he got into a verbal altercation with the student and this is when he threatened to hit him. but wait...the story gets better...

A few days later, Forde asked another student to “put a hit” on the teenager, according to a police report.

"The suspect advised to the witness that he would pay him to kill the victim," the report states.

The teacher wrote the victim's name on a note and showed it to another student on the school bus, the report says.

.......words fail when reading the above statements. One would think that Mr. Forde was immediately fired and brought up on criminial charges. He was arrested and jailed, but heres the school systems response...

School officials postponed the employment hearing scheduled on Tuesday for Forde to face POSSIBLE disciplinary action, White said, under advice from the district's attorney that there had been no sufficient prior notice.

....Um WHAT?!... you attempt to have one student kill another and you face POSSIBLE disciplinary measures AND you still get paid?! This is not justice...this is covering someones ass while simultaneously trying to sweep this under the rug.

According to this same article Forde had recently been arrested for making "terrorist threats". An easy crime to accuse someone of to be sure, but when Forde is released on a $10,000 bond it implies that there is some substance to the charge. Also, that Mr. Forde was acquiring a criminal history while remaining in the employ of the school system. I'm pretty sure the police notified the schools that he had been arrested. Therefore the school system knew Mr. forde was a possible threat to his students...at least this is my opinion on the matter.

However, in blame the victim fashion Fordes attorney had this to say...which would be all well and good if the article didn't also imply that their was more than one witness. but heres their blame the gays argument...

Forde's attorney, Borquaye Thomas, said the 16-year-old only complained after he got in trouble for another incident.

"The allegation is he made a hit on him, but that was not what was said nor what was intended," Thomas said. "The student only complained after he was getting suspended."

Forde asked the student about being gay after he saw the boy dancing inappropriately with another male student in class, Thomas said.

"All of the students knew Mr. Forde was joking," Thomas said. "The other students said Mr. Forde always plays around with them like that."

The student in question is understandably afraid to go back to school and untrusting of authorities...gee, wonder why that would be.
Posted by GFV at 11:13 AM