Not So Smart Advertising And Common Adsense

The struggle for Marriage Equality has never been a straight forward fight...sometimes people fight dirty and we've seen abundant instances of where the "Yes On 1" campaign is willing to lie to achieve its goals. But lately, some of those dirty tactics have turned up on the our YouTube page. I'm sure all of you are familiar with this ad by now: 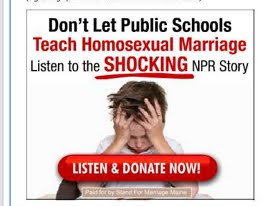 Yes ..their story is shocking in that it took NPR's original story, dismantled it, and reassembled it into something they could use to inspire more homo hysteria. Its also shocking that they are willing to use children as intellectual human shields...but that's not the issue here.

Many of our YouTube viewers have expressed indignation that this ad appears on our Channel, so we felt the need to address why we left it there. Believe me..when I saw it, the first thing I did was attempt to disable it..which doesn't work so well once the video has been made live. This gave us a chance to think about it.

First off..as an Adsense member, we don't get to pick the ads displayed on our page. Adsense does that by targeting keywords within our sight and selecting ads with similar keywords. That's why we have moved away from adsense on our blog and have gone with a site that actually uses a human being to help coordinate the ads.
We were actually getting ads for oatmeal with adsense...how does that match up with marriage equality? I don't think even Wilfred Brimley can explain that one.

But on to the meat:

Every ad that an advertiser places with Google adsense costs that advertiser money right off the bat, just to place it...then they pay MORE money when an ad is clicked. So In essence...Stand For Marriage Maine is paying for every ad you see and for every click on that ad. That's more money out of the coffers of NOM and Stand for Marriage Maine. So, anything that further drains their seemingly inexhaustible coffers is good news for us...especially when its completely wasted advertising dollars. Thats money that WONT fund a t.v. ad in Maine or again in California when the fight returns here.

Thanks for the tip S4MM! We hope they service we provide is worth the money your giving us.

Another example of "what doesn't work for them. works for us" Is the recent reposting of ours and Sean Chapins take on "King and King". A YouTube user with an anti-gay channel took our video and posted it to his channel without asking permission (Which is not such a big deal since we encouraged everyone to spread our content around). He Added his own anti-gay rant in the side bar but otherwise, left the video intact. This immediately prompted alot of our viewers to cry foul play!

He did not alter the video. This means who ever views it will see it just like it was intended. So...he has now expanded our viewership to reach a portion of YouTube viewers we would not have otherwise reached...So thank you anonymous YouTube user, we couldn't have done it without you!

If anyone wishes to check it out you can find it here. Please rate and comment based on the content of the video and not the intentions of the reposter.

The moral of the story, dear readers, is that when The Right gives you civil rights stripping lemons, you make some tasty pink lemonade...and enjoy it with a smile.

P.S....tommorows the big day In Maine. We would like to ask that those who are spiritually inclined would put out there own form of positive prayer. We sincerely hope that tomorrow the Maine voters uphold the values that all Americans should hold dear....fairness, equality under the law, and the character to act against coercion.
Posted by GFV at 9:58 AM