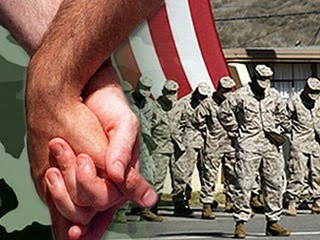 DADT has been in the news alot lately after the Presidents "State of The Union" address in which he promised to work to repeal the ban on gays in the military "this year". On the surface, it seems as if their is some actual movement on this....We have a senate hearing scheduled for Febuary 9th and "implementation plans" are rumored to be in the works. All this sounds encouraging...until you start to look a little deeper, thats when you get to the..."I didnt want to know" part of "Don't Ask Dont Tell".

The Presidents comments  have conservatives and religious groups going all kinds of crazy right now. They havent figured out that the gay community isn't holding its breath for this as we have been let down by the Obama administration too many times, so they shouldn't either. But that hasn't occured to these people:

URGENT NEW PETITION: SELECT HERE TO SIGN AND DEFEND OUR TROOPS AGAINST OPEN HOMOSEXUAL AGGRESSION, and we will fax your personalized petition to all 100 Senators and 435 Congressmen, (saving you hours of labor!)

President Obama pledged in his State of the Union Address to promote open homosexual aggression within the ranks of the military, by directly recruiting Congressmen and Senators in 2010 to overturn the "Don't Ask, Don't Tell" law that saves troops lives and already guarantees equality. Ignoring a letter signed by over 1,150 retired military flag and general officers, who asked Obama to enforce the 1993 Clinton-era law that currently prohibits open homosexual aggression in the military, Obama instead sacrificed military readiness, unit cohesion, and safety of all American troops, to prioritize his special relationship with less than 1% of the American population who claimed to be homosexual in the last census.

Um...excuse me?...special relationship? since when?!...the President has been completely ambivelent about anthing that has to do with gay rights and the ONLY time he acts is when there is a large public outcry. We in the LGBT community have learned the hard way that President Obama is not our "fierce advocate". He has not stood beside us on a single issue...one example of this being his lack of visibility in any of the marriage equality ballot initiatives...where positive statements by the President could have helped marriage equality in California or Maine.... but none came. So how exactly is this a "special relationship"? And is the use of this term meant to imply that the President is gay?....come on...you don't have anything better than that?


"This year, I will work with Congress and our military to finally repeal the law that denies gay men and women the right to serve the country they love," Obama boldly misled, repeating the vow he made during a speech Oct. 10th before a gay rights group. (The truth is homosexuals already now have the right to serve, so long as they keep their sexual aggression to themselves.)

Sexual aggression? Is this man of the cloth infering that we are rapists and sexual predators? I do think he is.....and "keeping their sexual aggression to themselves" is another way of saying "be a good gay and keep your mouth shut"...


"If you adhere to our common values, you should be treated no different than anyone else," Obama said oxymoronically, defining "equality" and "values" as a sudden endorsement of illegal acts of sod omy long banned by the Uniform Code of Military Justice. The Joint Chiefs sat stone-faced silent, aghast at Obama's plan, but powerless to publicly oppose their own Commander-In-Chief. We must be their voice...

"Most of the senior brass hold deep reservations about President Obama's pledge to end the ban on gays in the military, especially in the middle of two wars that have put extra stress on the military, down to the platoon level, where soldiers and Marines would be expected to bond with openly gay colleagues," the Times reported.


I have no doubt that most of this is true...I'm sure they are aghast. But I hardly think they lack a voice or that these men that we credit for their bravery in military service would EVER be afraid to use that voice if they felt the secuity of the country was at risk. The reality is...they don't like it. They will stonewall as much as possible, as evidenced by their complete bullshit excuse that they need to do studies on how to implement the repeal. Whats to study? All you have to do is stop kicking people out...its not brain surgery....

One very famous example of this was reported by Queerty, that the Pentagon was doing a study into the separate showering facilites for gay and lesbian soldiers....wow...any excuss to spend money will do over at the Pentagon. This is a bald-face and heinous example of segregation if I ever saw it. Nothing is going to make a soldier feel more ashamed then going to the "gays only" shower. Considering this as an option to make the straight soldiers more "comfortable", completely ignores the fact that gay men and women have been serving...and showering...with their straight fellow soldiers since we first created a standing army. We're already their!....showering right beside you!....be afraid!...be very afraid!  I'm really sorry that we give you the oogies...but separate showers because you are "uncomfortable" with gays is not o.k. This whole notion of separate shower facilities had better turn out to be a stonewall technique and not an actual consideration because it is both sad and laughable.

In addition...its precisely because we are fighting two wars that we need to end this discriminatory and wastefull policy. You have Soldiers being called back into service again and again under "stop loss" who have gone above and beyond the call of duty and who want nothing more than to go home to their families...then men and women who want to serve but are forced to stand on the outside and look in because they are gay. Why don't you let us shoulder some of the burden for a while.

WHY KEEP OPEN HOMOSEXUALITY OUT OF THE MILITARY?

News flash #1...gay men and women are already in the military fighting and dying right alongside their heterosexual counterparts.... your not keeping anyone out only allowing those serving to do so openly. Their lives are of equal value and to intimate that more soldiers will be killed because of their presence is to completely devalue their contributions and lives...it is insulting to the extreme. Not only to gay soldiers but to all soldiers and to our nation.


2) Men and women do not share the same showers for obvious reasons, so why force men to share showers with openly homosexual men? This fact alone would hurt recruiting.

News flash #2! Gay men and women have been showering with their straight counterparts for years now and I don't see a huge rush of complaints about sexual harrassment. Plus to cast gay men and women as only being focused on sex is another way to cheapen and devalue them as human beings...shame on you sir.


3) The rampant spread of the HIV-AIDS virus contaminates the blood often shared by necessity on the battlefield. Soldiers requiring blood-transfusions and medics would be immediately endangered.

News flash #3!....The perception that all gay people have HIV is wrong! You might want to get up to date with current information, this is no longer 1980. HIV is just as present in the heterosexual population as it is in the gay population. NO ONE has sex without protection these days....no one...unless you have been in a monogamous relationship and know your HIV status....that goes for straights too. To deny a wounded soldier blood because it came froma gay soldier is to ensure that soldiers death for no good reason.


4) "Gay promotion quotas" would soon be forced upon presently impartial promotion boards, causing a burdensome rise in sexually-charged "equal opportunity" complaints against commanders, especially those who offend gays by inadvertently speaking of their traditional Judeo-Christian faith.

Those who would offend gays by using their faith...Hmmm...I wonder...when churches preached against the mixing of the races, did a few people use the Bible against African Americans?...yes, I think they did. I'm sure a good portion of those comments were made in the military by white soldiers that didn't want to serve with Black ones. If those soldiers got into trouble for their rascist remarks, was it a slap in the face to their faith? Sometimes its not a matter of faith sir, its a matter of common sense and your comment above shows none.

Do we have female quotas? Black quotas? Hispanic quotas? I'm not hearing a huge outcry about these "injustices" either. In a day and age when we are fighting two wars we need all the help we can get and their not exactly lining up at the recruiting office these days.

This petition drive is nonsensical in the extreme. To call out the President as being a despot and faith destroyer is rediculous when he has done nothing for the gay community to date but offer lip service. If Obama wanted to end this policy right this minute...he could...all it would take is one stroke of the presidential pin on executive order and then your worst nightmare would come true....LGBT people, treated with dignity and equality.
Posted by GFV at 11:46 AM