What We Leave Behind...The Story Of Brendan Burke 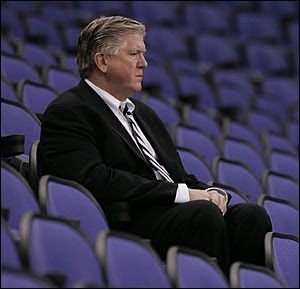 No parent should outlive their child. Thats a statement meant to convey the utter depth of sadness (as if any words could) when a parent losses their child, no matter whether that child is newborn, or nearly grown. Such is the case of Hockey legend Brian Burke, who lost his son Brendan to a car accident early this month. It is also true that great souls never truly leave us. They live on in the effect they have had on all of us.
No mans life can be fully told...nor can the depth of anothers grief be felt or understood. I do not intend to do either of those things here, but I do intend to show that Brendan Burke was an extraordinary man that took what life had given him and used it to make life better for others....That alone counts as extraordinary and deserves to be told.

I first came to know about the Burke family when Brendan Burke came out publically in November of last year. At the time it was causing a big buzz in the hockey world and the gay blogs because Brendans father, Brian Burke, is a hockey icon known more for his intimidating demeanor than as the soft hearted father that he is. This is equivalent to Gareth Thomas's coming out, in terms of the conversation it generated and its potential to change the way gays are considered in sports. After all, if someone like Burke could come out and publically accept his son...who's gonna question him? The clueless guy who gets his head bitten off, thats who. Burke is quoted in a Sports Illustrated article:

A few days after Brendan came out to his father, in late December 2007, Brian told him, "You know the best part? I don't have to take anything back." Burke says he never told his children there was anything wrong with homosexuality.

And this from a man with such a tough guy image. Brendan was very lucky to have him as a father. You'll see more later why this is true.

At the time I remember being very proud of Brendan. I know that his decision wasn't easy. He had to know what kind of opposition he would face. Even if he had no reason to doubt his Father's acceptance, his announcement would nonetheless impact his family and be the topic of much conversation. He also had chosen to use his coming out to create positive change for gay sportsmen and was willing to face whatever homophobic backlash that he may recieve. He impressed me because he seemed to bear it with such grace, always with a natural smile on his face. He made me say to myself, "Now thats how you do it." In my heart I sent him a silent hi-five. To have his father be as straight forward accepting as he was publically, made the story all that much better. But it wasn't yet the end of the story.
In Febuary it was announced that Brendan had died in a car crash with a friend. I was shocked and crushed. It seemed like the happily ever after of his coming out and the acceptance that generated had been stolen along with his life. I couldn't help thinking that perhaps Brendan had completed whatever it was he had come to this earth to do, now it was up to those he had touched to take the lessons he had taught by his life and make something of them. I say that not to be crass...or trite...though those words almost always sound that way. Life presents us with mysteries sometimes and its hard to understand their purpose. Sometimes we can't see their impact, or meaning until we are far down the road from when they occured. I saw a beautifull young man, who...while his life was brief changed the world for the better by being in it...and by chosing to be open and honest about who he was as a way to help others, which in this world is such a rare trait. but even here..Brendans story does not end...
Burke is honoring his son in Vancouver, where Brendan was born, at the Winter Olympics, where Burke also serves as general manager for team USA.

After Brendan publicly revealed his sexual preference, Brian was flooded with requests to do advocacy work on behalf of gays. He told the groups that while he supported his son, he had other causes: land conservation, blood donation and children's literacy. He didn't want to dilute that work. This, too, changed on that Friday in February. Brendan's causes are Brian's now. He will do a public-service announcement aimed at eliminating the bullying of gay children. And he plans to march in the Toronto Pride Parade. "I'd promised him I would march with him," says Burke, who briefly left the Olympics last Friday to attend a memorial service for Brendan at Miami of Ohio. "He won't be there, but I will."

What an amazing difference one mans actions had on the world around him. Brendan seemed to bring out the best in everyone...even in those who only read about him in the news. Such was the magnatism of his heart and his life. I know that Brendans father is going through an unimaginable grief.....but I can't think of how the world would continue to be if he hadn't been as couragous as he was. He changed the heart of one of hockey's gruffest individuals...his father....and in doing so made a bigger impact on the world. And I suspect Brendan Burke's story is yet to be over....great spirits like his always live on. And like all spirits who burn so brightly, they leave a little bit of themselves in those they have touched. Now the torch passes from the son to the father. 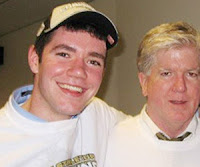