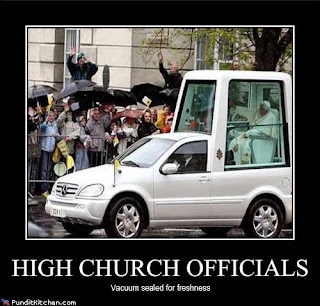 Wow...I woke up this morning to find my email box screaming at me with an urgent GFV alert. Apparently the Catholic Church is at odds with UK lawmakers over a proposed equality bill and it has attracted the attention of Pope Benedict the XVI....as I understand it, it's generally not a good thing to pop up on the Popes radar...especially to the extent that he feels the need to make a personal appearance. The last time the Pope personally visited the UK was 1982....wow. You all must have done something really bad for the Pope to come personally after that long an absence...


This was the first time that I had heard that a conflict was taking place between UK lawmakers and the Church, so I had to get up to speed with what was happening. A kind friend from London (orangegoblin82) helped clue me in to the bill and its supposed consequences. In effect, what is taking place is not a new bill but a clarification of existing law. As of now, the UK's employment non-discrimination laws make only one exception for "religious institutions"...which is a pretty broad term. Religious institutions, in this sense could be taken to mean not only the church and its clergy, but also adoption agencies and charities run by the church as well as anyone employed by these secular arms of the church. Those bodies would include secretaries, accountants, lawyers, social workers, maintance workers and a whole host of people who's jobs would fall under civil governance as much as they would the church as their employer. The church would still have to give benefits and take taxes from these individuals just like any other employer would and thus be subject to certain laws.

The clarification to the existing law would expand non-discrimination protections to this level of people as well...causing the Catholic Church to cry foul. The law in no way affects clergy...only those who are paid employee's of the church. This would mean that the church could not fire...nor refuse to hire someone on the basis of their sexuality. This has the church up in arms claiming that this move would force the church to employ those that their faith rejects as sinfull. UK legislators argue that the fact that these are paid employee's lands them under the jusdiction of the state and its laws....render unto Ceasar indeed. 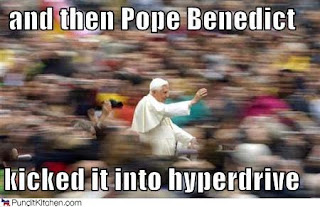 This has the Pope racing in the Popemobile to put the smackdown on this bill. But knowing that people in the UK like to be told what to do about as much as the Catholic Church does, I have a feeling this is going to be quite an intense contest to see who blinks first....ah I see we have footage of the Pope arriving in London now:

It took me a few moments of struggle with this becuase I don't believe that we should force the church to accept anyone that their faith prevents thems from accepting. I don't believe that the Christian faith..as I was raised with it...truly denounces gays as many assert. However, they believe that, and freedom of religion is one of the many freedoms my country is based on. I looked at adoption agencies and charity works as an arm of the church and to intrude in such a way as a breach of religious freedom...even if I don't agree with their stance.....but then...

My husband...who's job it is to challenge me, asked a simple question. "would it be o.k. to fire someone because they are Catholic?"

No, it would not be... and that would also illicit cries of the restriction of religious freedom. So why is it o.k. for the church to do it to us? Don't we do unto others as we would have them do unto us?

The light went on for me that what they were doing was leaving the realm of religious freedom and entering the realm of civil governance. The church  still must provide sick leave, health insurance, vacation time, retirement, and all the standard benefits you would provide to an employee in the area in which they are operating. The church doesn't contest this as a restriction on their freedom and the people this law effects may or may not even be members of the church,...they are employee's at a level of the church that is working in secular society. 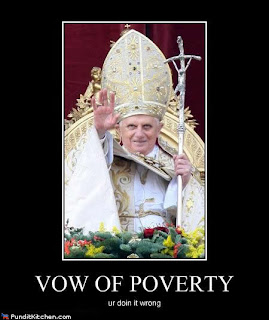 Pope Benedict to the Catholic bishops of England and Wales gathered in Rome:

"Your country is well-known for its firm commitment to equality of opportunity for all members of society."

"Yet, as you have rightly pointed out, the effect of some of the legislation designed to achieve this goal has been to impose unjust limitations on the freedom of religious communities to act in accordance with their beliefs."


"In some respects it actually violates the natural law upon which the equality of all human beings is grounded and by which it is guaranteed."

His Holiness is rather fond of the "natural law" schtick. He beats that drum with little realization of its true meaning and implications. If he were ever to be confronted with a scientific study about homosexuality in nature I bet he would ignore or suppress it. His version of natural law goes no farther than Catholic cannon or "because thats the way its always been."

And whats even more damaging to the Catholic faith is that this is the direction church officials want to go....more conservative...more extreme. After all...pontiffs concerned about the infiltration of liberall ideas into the church elected Ratzinger because of his conservative and hardline stance. They were afraid Catholicism was becoming diluted. What they may have actually accomplished however, is to completely banish all possibility for the Church to grow more compassionate to a suffering world. They are increasingly being seen as a force for religiously based bullying and nonsensical policy. Many wonder why they spend so much time and effort fighting gay issues that could better be spent helping out in places like Haiti or why they ban birth control when so many nations face starvation and overcrowding. They are pushing away more potential believers than they are drawing to themselves.

In Addition, legislators are now ..again.. facing the unique position of voting concience...or faith. Many will have to chose whether to back a law that they believe in and face reprisals from their religious leaders or join the lockstep of Vatican policy.  Labour MEP Stephen Hughes, speaking in Rome, said: "As a Catholic, I am appalled by the attitude of the Pope. Religious leaders should be trying to eradicate inequality, not perpetuate it." ..wow...you dont think the Pope has his picture on his  gold encrusted Papal dart board right now?...I smell a few excommunications coming and that is a rather sad state of affairs. 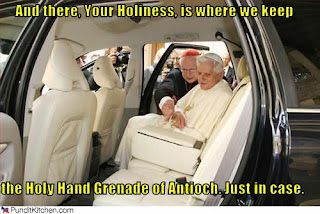 Human rights campaigner Peter Tatchell offered this, in counterpoint to Pope Benedict. He says the Popes efforts are a ...


"coded attack on the legal rights granted to women and gay people".

"His ill-informed claim that our equality laws undermine religious freedom suggests that he supports the right of churches to discriminate in accordance with their religious ethos," he said.


"He seems to be defending discrimination by religious institutions and demanding that they should be above the law."

I would add that the Popes efforts could also be seen as a way to exclude and thus discriminate against those of other faiths from employment as well....which I'm sure would also be covered under the law.

So...we find that as civil rights issues go..this one is not as straight forward as most and is likely to incite heated debate. I have no doubt that there will be a chorus of "I told you so's" from religious groups that appose gay rights and use the argument that "gays want to destroy religion" as a defence. However, this issue is larger than a gay rights issue and touches many different people. But now its your turn to wheigh in....you have heard my point of view...whats yours?
Posted by GFV at 12:58 PM