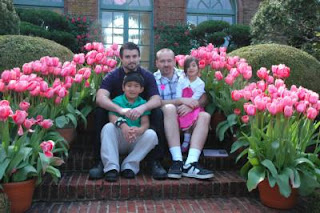 Today is my first day back after giving myself the ginsu treatment with a rusty razor blade. I'm still very much in healing mode and trying to take it light...but ...when you fall off the bike, you have to get right back on, so here I am.

Jen brought this article about two dad to my attention yesterday and it was a fantastic story that echoes our experience as two dads raising kids in an opposite sex world. The article, written by Efrem Seeger and titled "Everyone Has A Mother", tells the account of how the author and his husband answered a frank question from one of his sons playmates about his mother...and more specifically...where is she? Because everyone has a mother right?


For us the question has different dimensions than it did for Mr. Seeger. Having children through adoption sometimes means that your kids have memories of their birth families and that not all of their memories are going to be good ones.

Such is the case with our son Daniel. He remembers his mom and dad and not all of those memories are good ones. He remembers the day his dad was taken away by the police for breaking and entering. Thats one he mentions often to me and I can hear the pain in his voice as he describes it. When I ask him about his mother though, he is less forthcoming. Sometimes he can remember baking cookiees with her and other times he can remember being on the street with her without a place to stay.

Through all that happened to him though. He didn't understand why he was taken away from his mom and dad. When he first came to live with us he had alot of questions about that. Those are hard questions to answer to a five year old. How do you explain that his mother had a drug adiction that was so serious that she couldn't care for herself let her children, of which there were seven. We did our best to be as honest as possible him. We told him that his mother was sick and that she was not able to take care of him or his brothers and sisters. We told him that is what drugs do to you, they make you sick and sometimes it takes a long time to get better. Now...as he got older he was able to understand more and we have done our best to fill in the blanks for him as he can grasp it. I know that one day he is going to want to reach out to his biological family, and when he does he is going to have alot of questions for them....and it may hurt.

As for having two dads...he never cared much about that. I think thats mostly because he knew his mother. He knew she was out their somewhere struggling with her problem. So being raised by two men never brought up those kind of "birds and bees" questions. The harder part was communicating to Daniel that even though his biological family had its faults...that they still loved him and that it wasn't his fault what happened.

Selena on the other hand has questions. And so has her classmates, on occasion. To her classmates I often say that "Selena is lucky enough to have TWO daddies" and that seems to solve it. No major crisis there. Kids deal with lifes issues with much more acceptance than we do as adults. I remember, one time while voluteering in Selena's class, we were doing an art project when one of her classmates announced to me "My dads in Jail!".....Hmmm, I thought "how do you come back to that one? Clearly he's not bugged by it so why should I be? My response was," Thats o.k. buddy, It happens to alot of us". It wasn't a perfect answer but it was all I could get think up while trying to manage six preschoolers finger painting. I should have added, "And I'm sure your dad misses you and thinks about you everyday." Kids need to know that just because bad stuff happens to us in life, that its not there fault and it certainly doesn't mean that they aren't loved.

Selena has begun to work mommies into her fantasy play now. For being raised by two men, she seems to have a good handle on what a mommy is and what they do because she not only mothers her stuffed animals but her brother and classmates as well. With her stuffed animals she can be very loving but with her brother she is downright bossy.

Our response to her questions is largely the same as Daniel. We don't deny that she had a mother because one day that will make us look like liars. She needs to understand that she does have a mommy, even if that mommy was not able to care for her. And as she gets older we can give her a little bit more of the story as she can handle it. I know that she is going to have a place inside her with a great big question mark and that one day she is going to want to fill that in by reaching out to her mother and the rest of her family. Thats going to be a tough one on all of us...but its also part of the package of being a parent, even when it hurts.

But what of other parents?....The author quotes:

Since we were a gay couple we braced ourselves for any of the possible challenges that might arise: condescending mothers, homophobic fathers, teachers who would want to parent our children, thinking two men couldn’t possibly do the job themselves.

I have to shamefully admit, that I go into alot of school situations expecting this attitude by default. When I don't sense this attitude from others it puts me off balance a little bit. After all, Jay and I are not the face of parenthood that you see everyday in the classroom. I'm sure the other parents are filled with questions and attitudes that they keep underwraps while I'm around. Mothers talk to each other...they share all kinds of information with each other about great programs for thier kids, their personal lives,...and yes...gossip. I know that we have be discussed...I just don't ever get wind of it. It leaves you wondering where you really stand with people.

However, heres the big "but" that follows that last sentence....I am their for Selena....not myself and my own insecurities. Every parent has treated Selena, Daniel, and myself with kindness and respect...if not openess, and thats all I can ask. Perhaps my fear of rejection by others for being a gay dad is really me rejecting others who have done me no wrong before they can hurt me. After all, this is California, and one of the regions of my state that overwhelmingly voted against Prop 8. Perhaps I am not giving others the benefit of the doubt when I would hope for it for myself. But I can't help feeling like an outsider in a roomfull of mothers. Its like a secret club you can never break into.

But these are the admissions of two gay dads doing their best to be the best....even on those days when you really don't feel like "doing your best". We know that we can never be all that a mommy is, we just try to be the bast dads that we can be...and the best parents. That includes making mistakes. What it doesn't include is dishonesty. Those chickens always come home to roost. We know that closets can kill and that honesty really is the best policy...even if not for ourselves, but to help our children grow into the kind of adults that we know they can be.