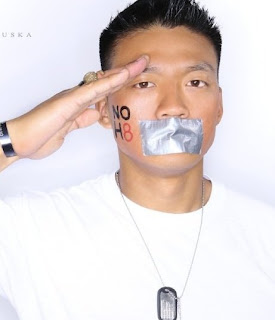 The old adage goes: "The squeeky wheel gets the grease". So it seems to be with Lt. Dan Choi, who has recently been recalled to active military service. This is an interesting development in the DADT repeal debate to say the least....but I find myself conflicted about it. After all, why now? Why only choi?

You may ask...Wasn't Lt. Choi already discharged? I had thought so. Apparently, he was served with the discharge papers but was given the option to fight it in court. The details of which have been all over the news in the past year. However, during this time, Lt. Choi has been  very vocal, and very visable in his advocacy for a DADT repeal. You could him speaking at any big gay event he had time to squeeze onto his schedule. This falls Equality march had Lt. Choi giving a rousing speach in uniform as well as placing a wreath at the Tomb Of The Unknown Soldier in the name of all gay servicemen and women. He has been at an unimaginable number of pride events and more than a few fundraising dinners....all of this in addition to television interviews. You can't think of DADT now without thinking of Lt. Choi., such has been the magnitude of his visibility on the issue.


The last I had heard, Lt. Choi was fighting his discharge and had to ask permission from the military to wear his uniform while laying the wreath at the Tomb Of The Unkown Soldier. He was all but kicked out by that point. Thats why it comes as a suprise to me that he has been called back. However  it happened, some formality in the discharge process(ink not dry? Not filed in triplicate?) has giving the army the ability to hold his discharge in permanant limbo and given them the ability to call him back into active duty....Why now? 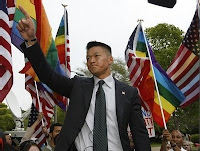 On the surface this has been described as a good thing because it could signal the end of "Don't Ask Don't Tell". Perhaps allowing Choi to serve signals the willingness of Military Commanders to begin showing their support for the repeal in more concrete ways than sponsering studies into separate shower facilities for gays. Perhaps this is there understated acknowledegment that they know and respect gay soldiers as just that...soldiers. Maybe Dan Choi, who has been the posterboy for DADT's abuses has now become the posterboy for gay "integration" in the military, someone that they can hold up as an example that they are moving on the issue....but this is alot of maybe's. 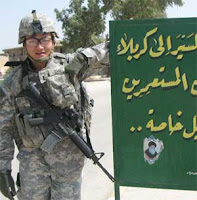 The Cynic in me see's more questions than answers. Why Lt. Choi? Certainly he is as deserving as any of the other soldiers affected by the policy... but, to date, I have not heard that any other soldiers are recieving the same treatment Lt. Choi is. Perhaps this is the Military's strategy to silence his voice while the debate is currently so high profile and Choi such a galvanizing figure? After all...its hard to be an outspoken gay activist while stationed in Kabul.

Also, Why now? Military leadership let Lt. Choi's discharge proceed all the way up till the final second. Now that its a high profile national debate they want to look like good guys? What would occur if the whole argument over a repeal got scuttled tommorow? What would be their treatment of Lt. Choi at that point? I can't imagine that they appreciated being put in the spot light by Lt. Choi's activism. Or that his coming out helped force the issue into national consciousness. I'm pretty sure they'd find a way to complete that discharge process.

And now that he is back on active duty, how does that affect what he can and can not say about the military?

Please don't get me wrong. I am glad that Lt. Choi gets to do the job he signed up to do....serve his country. He and all gay and lesbian people derserve the right to serve without being persecuted because of their sexual orientation. They serve with honor and distinction and that should be recognized over sexual orientation anyday. I am happy for him after a fashion...as happy as you can be for someone headed off to war....but...

The Army's decision to allow him to continue to serve openly has left me with more questions than answers. Their motivations are unclear and that is very offputting to me. And as any martial artist or military stratigist will tell you...putting you enemy off balace is a great way to knock him down.

However you go...Rock the Casbah Lt....or prayers will go with you. 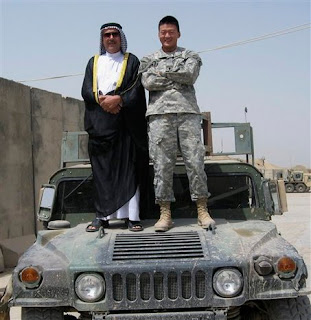