Standing Up For What you Believe In. 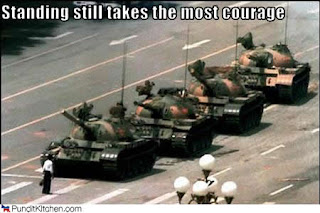 More often than I care to these days , while  musing about the status of the struggle for gay rights I ask myself..."Whats Next if it all goes south?" What happens when ballot initiatives ban our ability to marry the ones we love in all but a couple of states? What happens if the Federal Supreme Court rules that upholding those bans is constitutional? What happens if we never see an employment protection act or a "Don't Ask Don't Tell" repeal? What do we do if it all goes to hell in a handbasket and LGBT citizens become official second class citizens with our status as such codified by law?

If you listen to the rumblings of teabaggers (who's name always makes me snicker) then you would be lead to believe that the people of America are headed for eminent revolution. But how real is their saber rattling?...Who knows...but  That brings us the essence of this thread. How far is too far to be pushed? And what will we do if we get to that point? Is it when we are forced to come to the realization that lawmakers are never going to fight for us out of their own good will ...or that theoretical day when police are again regularly raiding gay bars, Handcuffing  us to telephone polls, and printing our pictures in the paper to shame us?

Well...GLBT students at John Carrol University, in Cleveland found their line in the sand. Angered over the schools intentional decision to omit LGBT people from its anti-discrimination policies they decided it was their time to take action:

Now...Colleges are no strangers to protest rallies. Hell at U.C. Berkeley you get a protest when the wind blows the wrong direction. Also, as sit ins go...this was practically a nap in the shade on a warm summer day. I do however, applaud them for making a stand and for being a thorn in the schools side. Will it be enough to cause the School to rethink its policies? Probably not. It usually takes many events like these and some media coverage before the administrators realize that the issue is not going to go away. But it took guts and you could plainly see that it pissed off the school officials that were trying to convince them to leave. I found myself wishing that some of the watching crowd, or the basketball players had joined them in solidarity. 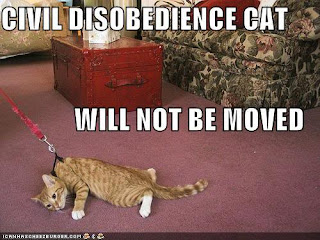 Is this our only option(besides emmigration) should all legal routes to equality fail?

Civil disobedience itself takes many forms and has a long history in the U.S. I am no history buff, but even I can name severall different examples of what it means to resist an entrenched establishment. Rosa Parks set the example by simply refusing to get out of her seat on the bus. Martin Luther King made a statement with massive marches, rallies, and leading by inspiration. Both of these individuals set the bar for what would become a much wider social change and help create the protest generation of the 60's. Say what you will about flower children...but they were the very face of peacefull protest in everything from the Vietnam war to equal rights for women. They wrote the book. When one see's an image of a burning bra..no one mistakes the context of the image. All of these are examples of peacefull forms of resistance.

But there is another side to protest that isn't so peacefull...or passive. Malcom X advocated that African Americans stand up for themselves in any manner that was appropriate...violence included. The very thought of this man makes many teabaggers howl with idignation...when while they allude to the same kinds of actions that he did. Overlooking for a moment  Malcome X's  extremist claims that white people were "white devils", how is espousing self-protection radical? 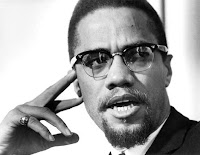 I DO NOT advocate violence....let me make that clear...I would always chose the peacefull path and encourage others to do so as well until violence was a last resort. But where do we draw that line? If we revert to the days of regular police raids? And sas not Stonewall an act of violent resistance? And what of the "White Night riots"? Most of us regard those moments in history with pride as the beginning of a gay identity that would not be pushed around any more. 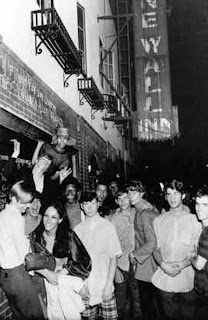 A vintage pic of the vigil for Harvey Milk on the night of the White Night Riots: 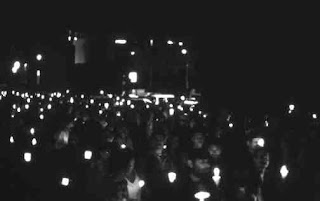 As you can see, the gay community is no stranger to resistance either. But do we still have it in us today? I hope we find it when we need it.

A moment I will never forget in all my life was the night that it was announced that Prop 8 had passed. Jay and I were so angry we didn't know what to do with that much emotional energy...as many of us were. Then we heard about the march down Market Street in San Francisco. Immediately we were in the car and on our way. When we got there, there was a modest crowd collecting downtown. Then we got underway marching down Market toward the Castro. News helicopters circled the skies keeping close watch on us. And cars unable to go anywhere because of the march ..honked in support. ....It didn't settle on me though what was happening until we got to a section of market about halfway to our destination when we could see pretty far up the street in both directions. I kid you not when I say it was a sea of candle lit faces as far as I was able to see....front and back. Our crowd had snowballed to an unimaginable number....I couldn't believe it.

As we turned down the Castro and went up the street about level with the Castro theater, across the street, at the top of a building was a barechested man Waving a giant gay pride over the crowd. It was a stirring moment and I can't think of a better way to end that experience. A couple days later saw a similar event here in my home town. As usual, when both events where broadcast in the news the number of those in attendance was severely downplayed...just like the equality march was glossed over in the news.
Those events served to put the public on notice that we were upset at the events surrounding Prop 8...and rightfull so. We had been wronged. When another protest was announced to meet halfway between L.A. and San Francisco, it was met with some nervous concern in the news. But....then it all stopped. The State Supreme Court took up the trial and all the zeal for protest drained away.
My feeling is...that if legal methods fail to provide equal protection....if the worst case scenarios come to pass, protests like the ones mentioned above need to happen everyday until people get the message that wishing us away won't work. That America belongs to more than just one group of people who feel they are entitled to own all of it. And neither will we go quietly back into the closet. Those days of living in shadows are long passed. 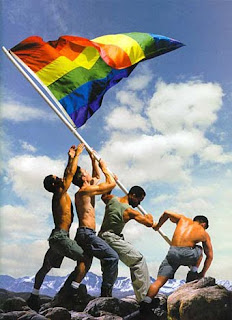