Going Where No Man Has Gone Before....Except "Teh Gays" That is 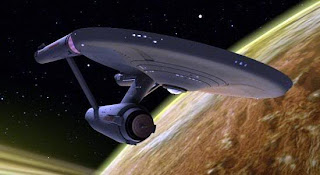 Kirk: Is that a trail of glitter on  the view screen? How did that get out in space?

Chekov: It appears to be the warp signature of an alien wessel captain.

Kirk: Uhura!...have we been hailed?

Uhura: I havent recieved anything captain...but all communication with starfleet has been cut off...all I can get is loud dance music.

Kirk: Spock...who redecorated the bridge? The lighting is incredible!...and when did we start serving mojito's?

Spock: I did not authorize any such improvements captain....It is highly illogical.

Kirk: ...and did our uniforms get tighter? I didn't think that was possible. My butt looks incredible but I can barely breath in this thing.....Spock!...Bones! whats going on?!

Mccoy: Dammit Jim!...I'm a doctor, not a fashion designer!

Spock: It is uncertain captain. It appears that we have been visted by a previously unknown alien culture. 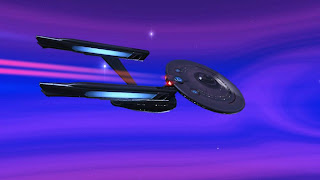 Alright dear readers....many of you know that I am a rabid Star Wars fan. In fact, I also love lots of other scifi titles...even if they don't rock my world as much as Star Wars does.

I am also an avid online gamer and recently released from Cryptic studios is, Star Trek Online. Which means that I am totally gonna play the hell out of this game.

Now...I've been playing Star Wars Galaxies for more than five years. I've gone through all their game content so many times that I can do it in my sleep. Its time for a change. Star Wars: "The Old Republic" is still more than a year away, so Star Trek makes for a breath of fresh air....AND...this time I am not going to play it straight...a new game and being out to my friends from Galaxies means ...I'm bringin "teh gay" to Trek. Sadly, it wont be where no gay man has gone before....thanks alot Mr. Sulu..../sarcasm

So...If any of my readers are gamers and Star Trek officianados. I would love to connect with people and enjoy galactic exploration...and serving in a military that could care less about sexuality....so far my experience with it has been fun. Almost like playing through an episode of the t.v. show. Also, all of the images you see on this page are ingame screenshots. Pretty eh?..See you on the final frontier!

When I pry Jay off my computer I will update this thread with my ingame contact info :)

*UPDATE* My ingame handle is Turok@-Outrider-   they have totally wierd handles in this game. 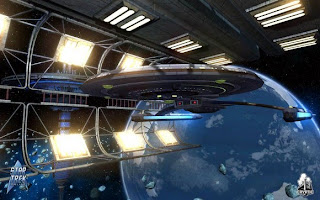