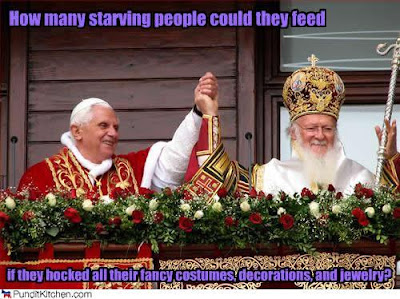 Many of my readers may be following the developments with marriage equality in Washington D.C.

Marriage for Gays and Lesbians passed the City Council by an 11-2 vote. That alone is cause for celebration. But what of Catholic Charities threat to remove its services to the citizens on D.C.?

A Washington Post article By Tim Craig and Michelle Boorstein details the original threat made by the Archdiocese of Washington to remove its services...which, among other services includes homeless shelters and adoption assitance.

Yes you heard that right...if D.C. allows gays to marry, then they will stop serving hot meals and beds to those who are out in the cold this Christmas.... Bah humbug to you too Padre Grinch. So instead of giving to the poor, because its the human and compassionate thing to do...and the right thing to do...they are using it as a threat and a bargaining chip to force a governing body to accept its will...Separation of church and state indeed.

Facing tremendous criticism and public outcry about this obviously petty tactic, the Catholic Diocese attempted to deny their statement and recharacterize themselves as victims of religious discrimination. The proof of this can be found in St Peter's Cathedral's weekly bulletin: 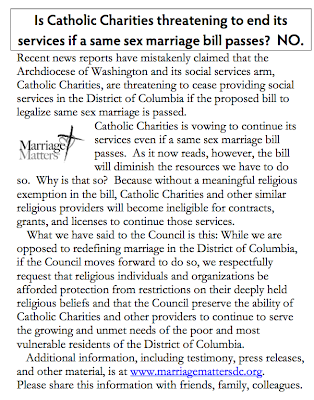 Oh my, how they must suffer..../sarcasm

So using your charitable services as an item with which to blackmail a City blows up in your face and you are the victim...please. We all know that letting gays marry has nothing to do with ladling hot food onto a plate or helping kids in the foster system, and the D.C. city council knows it to which is why they called their bluff and voted for marriage equality in the District.

In a statement made yesterday the Washington Archdiocese backed down from it threat and instead made out as if yesterdays win for marriage equality is just an unfortunate event...not the sign of the end times they were railing about before. They had this to say:

Today the District of Columbia joined a handful of states where legislatures or courts have redefined marriage to include persons of the same sex. Since this legislation was first introduced in October, the Archdiocese of Washington opposed the redefinition of marriage based on the core teaching of the Catholic Church that the complementarity of man and woman is intrinsic to the definition of marriage. However, understanding the City Council was committed to legalizing same sex marriages, the archdiocese advocated for a bill that would balance the Council’s interest in redefining marriage with the need to protect religious freedom. Regrettably, the bill did not strike that balance.

The Archdiocese of Washington and Catholic Charities are deeply committed to serving those in need, regardless of race, creed, gender, ethnic origin or sexual orientation. This commitment is integral to our Catholic faith and will remain unchanged into the future.

Religious organizations have long been eligible to provide social services in our nation’s capital and have not been excluded simply because of their religious character. This is because the choice of provider has focused on the ability to deliver services effectively and efficiently. We are committed to serving the needs of the poor and look forward to working in partnership with the District of Columbia consistent with the mission of the Catholic Church.

Yes we see your hypocrisy and glossing over it now doesn't make it go away. And furthermore, when the chips were down, you folded....but if there had not been massive attention brought to this... would you have given in so easily?

A similar case happened here in San Francisco with the Salvation Army. When S.F. required that all organizations doing business with the city provide domestic partnership benefits, the Salvation Army threatened to remove their services, which would have dealt a severe blow to those who relied on their services, including those suffering from HIV and AIDS. Ultimately, due to public outcry, they backed down and continue to provide services to the needy in the city of San Francisco.

However, I still can't get over the thought that doing good was not supposed to come with a price, or strings attached.

Jay had plenty to say about this too and took his anger to teh toob: