A Love To Hide 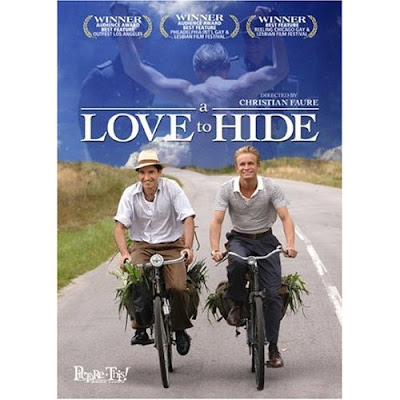 Every once in a while a movie comes out of the blue that makes me sit up and take notice...fewer still, are the ones that move me to blog about them. Jay gets so many movies and some of them are real stinkers. But one movie showed up in our mailbox this weekend that redeemed Jays previous awful picks..."A Love To Hide".

The movie is french, in English subtitles and follows Jean, Phillipe, and Sara...three people clinging together for life in Nazi occupied France. The movie begins with Sara showing up, haunted and broken, at Jean's doorstep after watching her family be gunned down. Sara's family had been attempting to escape France rather than face relocation to an internment camp for being Jews. They try to flee with the help of a smuggler who instead turns them in to the Nazi's. Jean agrees to hide Sara in the apartment that he shares with his lover Phillipe. Complicated enough yet? well...Jean is hiding the fact that he is gay from his family. Also, Sara carries a major torch for Jean that began when they grew up together.

The movie goes on to detail not only what it was like harboring Sara away from the Nazi's, but it also gave us a little slice of gay life circa 1940. If your anything like me, I inhale anything that has to do with gay history. It was heartbreaking to watch as the main character is arrested for having one reluctant dance with a Nazi officer. He becomes reviled by his own people and the Germans alike and ultimately ends up in a labor camp. But that's not the end of Jeans torments by a long shot. After witnessing a fellow homosexual prisoner stripped naked, a burlap bag placed over his head, and murdered by flamethrower,...he rebels against his Nazi taskmasters...leading to his transfer to Dachau and unimaginable tortures...

I can not say any more, or I will give the whole movie away and there would be no reason for you to watch it. But I can say that this movie spoke to me. It made me think about how awful we can treat each other as human beings and how very close we are to the sentiments that make these atrocities possible. It was also sad to note however, even after being imprisoned and forced to die by hard labor... the gays were still looked down on..even by others slated for the camps themselves. Even being a Nazi officer didn't garner you special treatment or spare you a trip to the labor camps. We were regarded as a taint that had to be wiped out.....echoes of this thought still sound today in the voices of those who claim that we "erode the moral fabric of our nations".

I wish I could summon the right words to sum up this movie...but I just can't. It at times left me completely speechless with tears running down my face. But even though it was tragic, the love shared between Jean, Phillipe, and Sara was beautiful and brought a little light to one of the darkest times in our history.
Posted by GFV at 12:31 PM

Email ThisBlogThis!Share to TwitterShare to FacebookShare to Pinterest
Labels: A Love To Hide, Movies, recomendations