Gay In The Black Community 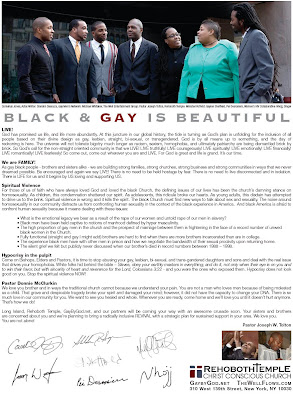 This ad was posted in response to Gospel singer and evangelist and ex-gay, Donnie McClurkin's recent spate of ridiculous remarks about gay youth and gay gospel singer Tonex. It was created by Pastor Joseph Tolton of Rehoboth Temple on behalf of the GLBTQ members of the Black religious community and posted at www.thebgmnetwork.com.

I posted this today because we as a community have been so divided and because I believe that "what effects one, affects us all". That said, it is nice to see this conversation taking place...however rancorous it is likely to get.

McClurkin's original comments highlights a longstanding attitude of denial when it comes to being black and gay, though that attitude is not limited to the African-American community be a long shot. You can still find people within certain minority communities, like the African-American communities and Asian communities that will swear up and down that there "Are no gay people within their community". They dismiss those that are gay as perverts and anomalies instead of as the full human beings that they are and equal members of that community. At its worst, this silence makes us feel as if we are completely alone in the world, that there is no one like us, which is so far from the truth. At worst, pretending that our lives don't exist gives encouragement to those that do horrible things to gay people because, how can you hurt what no one will acknowledge exists? However, as I already stated, this attitude is certainly not limited to the communities I mention here...there just isn't enough room on the Internet to include all the ways in which gay people are denied/ignored in their own communities of origin.

and ...Not being Black myself I will probably overstep some here but...like all my other articles...I do my best...so forgive me if I screw it up...I probably will.

To me, I was glad to see public conversation taking place and some push back against people who are making dangerous and ignorant statements about a very vulnerable class of people. We all have much to talk about when it comes homosexuality in America and the world at large...regardless of our color/gender/ethnicity/sexual identity/you name it. We've spent so long ignoring the elephant in the room, that now he's pissed and not going to take it anymore. The days of covering our eyes and ears have passed and its time to face it and talk about it.

We are gay and we come from YOUR community but most of all...we are human beings worthy of equal respect and a right to life. Just because Mr. McClurkin couldn't handle reconciling his faith and his sexuality doesn't mean that others feel the way he does, and they are willing to stand up and say it...which seems to be core of this ads message. Keep your self hate to yourself Mr. McClurkin, because we are just fine as we are.
Posted by GFV at 10:01 AM