Score One For Our Side 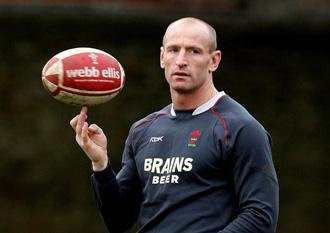 British Lions rugby player Gareth Thomas has come out and, by all accounts, this is sending shockwaves through the rugby world.....which is AWESOME.

Alright..this blogger has to admit right from the start that I have no interest or knowledge about sport of any kind. This has less to do with being gay and more to do with how I was brought up...but when I heard this story I couldn't help but stand up and cheer....but please forgive my sport-ignorance beforehand and read on...

Knowing how fierce rugby fans are in their loyalty to teams and players, I knew that this was going to be HUGE. I immediately imagined heartbroken straight-male fans crying into their pints and singing maudlin drinking songs and a few who were secretly proud. To date though...I know of no rioting fans or or flaming overturned cars...so I call this a win. And who couldn't fall in love with this man who shows so much much heart..not only on the field but in telling his story. Gareth may have just changed alot of hearts in people who don't think gay people are out there, doing big things in sports...or anywhere else for that matter. And he's the perfect answer to those who feel that allowing gays will somehow disrupt team cohesion.

Gareth's coming our story alone is enough to make your heartbreak..I know mine did...it feels like your going through it with him. Here are a few quotes from an article in The Daily Mail by Helen Weathers:

After his marriage in 2002 to teenage sweetheart Jemma - the woman he called his 'rock' - he spoke movingly of their desire to become parents and the heartbreak of her suffering three miscarriages.

And if anyone dared to suggest he was anything other than 100 per cent straight, Gareth 'Alfie' Thomas was prepared to make them see the error of their ways. With his fists, if necessary.

But, as he admits in the Daily Mail today, it was all a pretence, a fragile artifice - and one which came crashing down around his ears on November 4, 2006, following a Wales game in Cardiff.

Breaking down in tears in the changing rooms of the Millennium Stadium, Gareth finally realised he could not go on living a lie. Keeping his true sexuality a secret was destroying him....

...He says: 'I was like a ticking bomb. I thought I could suppress it, keep it locked away in some dark corner of myself, but I couldn't.

'It was who I was, and I just couldn't ignore it any more.

'I'd been through every emotion under the sun trying to deal with this.
'You wake up one morning thinking: "I can handle it. Everything is fine," and the next morning you don't want anyone to see your face, because you think that if people look at you, they will know.'

Boy do we know that feeling... 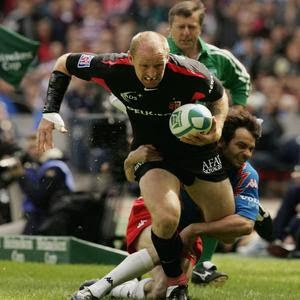 'When I was 16 or 17 I knew I was gay, but knowing and accepting are two very different things...

...Gareth's first gay sexual encounter was with a male, non-rugby-playing friend, when he was 18, a one-off encounter which left him feeling ashamed and frightened.

'At the time it felt right, but afterwards it felt wrong and I promised myself it would never happen again,' he says.

'I just completely denied everything. Everything I wasn't supposed to think or feel went through a trap door in my mind and was forgotten.

'I used to hope that I would wake up one morning, all these feelings would be gone and I'd be like the rest of them, be one of the boys without having to pretend.

'I used to pray constantly and ask God: "You have given me this great talent to play rugby. There must be some kind of answer." But there wasn't one.'

The article goes into a great deal of detail about his family and team mates reactions as well as his reasons for not coming out sooner. I love the whole story so much I want to post the it in its entirety because it warms my heart so much...but this post is already becoming waaaay too long and that would leave me little to add of my own.

The truly tremendous thing about this story however is why he chose to come out...and what he has chosen to do with the attention he has been given over this.

He just feels attitudes have changed and the time is right for sport to start accepting openly gay people in the same way other professions have in recent years.

Also, a big supporter of the NSPCC, he doesn't want desperate young people confused over their sexuality, or worried about any other issue, to suffer in silence, as he did for almost 20 years, too terrified to tell anyone.

The number of boys calling ChildLine about their sexuality has increased to 3,500 a year....

...'It's been really tough for me, hiding who I really am, and I don't want it to be like that for the next young person who wants to play rugby, or some frightened young kid...

...'I'm not going on a crusade, but I'm proud of who I am. I feel I have achieved everything I could ever possibly have hoped to achieve out of rugby, and I did it being gay.

'I want to send a positive message to other gay people that they can do it, too.

Thank you for having the courage Gareth. Thank you for coming out at the top of your game and not years after the fact. I know that both my husband and I wish you luck as you live your life in open, and You remind us that we, as GLBT people have much reason to hold our heads high...Also, you have just shown countless young people that being gay means you can be whatever you want to be and that it doesn't stop you from doing great things.
Posted by GFV at 10:49 AM