The Grass Is Always Greener

A long long time ago....before there was any gay marriage... 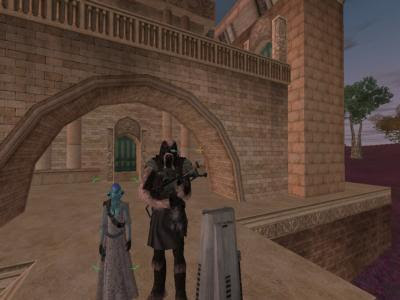 There was Cosca and Amola...

You probably already know that Jay and I are dyed-in-the-wool Star Wars fans. We will participate in just about anything that gets the Star Wars label. If they made a "Brick To The Head" Star Wars edition, I'd probably get that too.

So when Sony Online Entertainment and LucasArts announced they were working on a Star Wars based MMORPG (massively multiplayer online role playing game) under the name Star Wars Galaxies...we both squealed like little girls...well I did anyway. Little did we know the five year journey we would embark on, or the lessons about sexual identity we would learn along the way....which was unexpected, considering your not the everyday YOU in a game like this one.

Some background for anyone unfamiliar with an MMO...Massively Multiplayer Online games are played in an online "game world" where hundreds of players from around the world can connect and play together, creating endless opportunities for adventure and game play. In games such as these you are not just fighting an opponent but working together in groups to engage in complex adventures, exploring massive game worlds, forming communities and sometimes also economies. they're definitely not your old school video game. Popular titles we've played include, World of Warcraft, Guildwars, and Star Wars Galaxies.

This presented an interesting option for us as a gay couple. We had domestic partnership at the time through the State of California but marriage seemed like goal that we would never see in our lifetimes and the opportunity to play as a married couple was an enticing opportunity.

So, our fantasy characters began to take shape. I chose a male Wookiee because I admire their qualities of loyalty and strength. Jay chose to play a fish-like alien species called a "Mon Calamari". If you know your Star Wars, they were made famous by Admiral Ackbar in "Return Of The Jedi", for his famously funny line "its a twap!"......yes its geek humour , but consider who your talking to here. 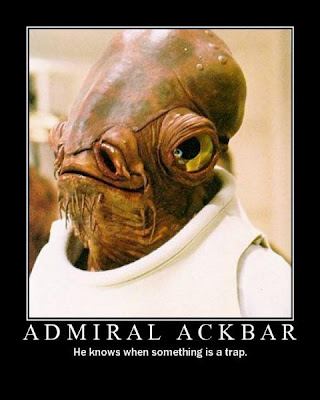 The important bit however, is that Jay elected to play a female. Not that that is at all unusual in the online gaming world. The old joke goes: "what does MMORPG mean?"....Many Men Online RolePlaying Women.

But... we theorized...If we are playing a fantasy game, why do we have to be constrained by our real life limitations? So we decided that Jays character..Amola, and mine...Cosca, would be married. The game allowed marriage between opposite gendered characters at that time and we attended more than a few online weddings in the game. So, we figured...why not us? What would it feel like to have that level of recognition? How would we be perceived or treated differently than we are as a gay couple. At this time it was only the two of us...so our online marriage began.

Now, take a second and shake off the heebs over how a giant, furry, clawed alien and a fishy one, get their grove on. That's not the point here and get your imagination out of the gutter anyway.. ;) What happens in game, stays in game.....

Time went on, and the game grew. We made friends and formed a guild...which is basically a collection a players banded together for mutual assistance, friendship, and fun. Our little group had grown to about 30-40 people at the time and Jay (as Amola) was the leader of our little misfit band of rebels. Jay was perfect for the roll of a dissent-stirring rabble rouser. You could also found cities in-game so our little rebel band founded our own which grew to include hundreds of other players as residents and Amola as mayor.

Our persona as a heterosexual couple meant we WERE treated differently in some respects. Jay could get away with being shamelessly flirty. So much so, that people questioned whether I should have been jealous and pulled some peoples arms out of their sockets, as Wookiees are wont to do.... but who can be jealous when no one knows your real life identity...your basically flirting with a cartoon. Jay never had a problem getting a favor done...if Amola asked...it got done. Video game playing females are in such a low ratio to male players that they are VERY popular....especially if they are actually played by females. Suffice it to say that Jay got lots of attention.

In My roll as cosca I got lots of pats on the back and "Cosca's a good Wook" comments. I felt like just one of the bunch. For a little while I didn't have to have the invisible label of "gay" attached to my name. There was no weirdness as if people didn't know what was o.k. to say or what would offend. It was nice for a while to just connect with people on the basis of who we were as people since everyones real life Identities no longer factored into how we interacted with each other.

The fly in the ointment came pretty early on. We were making friendships we valued and wanted to keep. It was becoming harder and harder to just be our characters as we grew closer to other players and we began to reveal details of our real lives. I talked alot about this with Jay. I was feeling like I wasn't being a real Friend... He rationalized that the game was fantasy based,...If I didn't have to come out as being a Wookiee, why did I feel the need to come out as gay? The conversation wasn't resolved and the end result was that the invisible wall between us and those around us was back, only it carried a different label this time. It was like being back in the closet all over again.

This image was created for my birthday by a good friend from the game who I Knew as the Wookiee "TUN". Hes a fantastic artist and cartoonist. This picture includes My character Cosca..the black and white Wookie, Amola...wrapped in red cloak, Arthus as Han Solo, and the artist himself...the ginger colored Wookiee,TUN. I wish I had one that included the many others I want to remember....like my good friend and Mon Calamari Jedi Hendi who I still play alongside today....as well as a list of other friends Waiting to find another game to call the diaspora together. 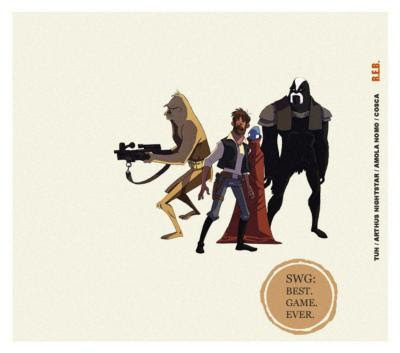 We played the game for nearly five years until Sony and LucasArts made some very unfortunate changes to the game that resulted in nearly everyone leaving the game. We carried on trying to keep our little band together in other games but they just didn't offer the same sense of community that Galaxies did. So ...dispersed into the electronic ether, Jay and me decided it was time to come out. We had made friends that we hoped to carry with us for years to come and without the game to use as an excuse, we decided the time for full honesty had come. So we came out to everyone.

There was a brief period of shock but then everything worked out o.k. Even if they didn't approve, they treated us with kindness and respect, which was all we can ever ask of anyone. The weirdness came back as if, once again, people were unsure of what to say and what would cause offense....oh well, can't have everything. It was good to be me again though, and to begin to build these friendships anew based on who we really were and including a part of our personalities that are hard to hide...even when everything else is stripped away.

I still play in Galaxies. There are only three of our original group of 30+ left. Some days it feels like a big empty room, full of memories. But, new games are on the horizon Like Bioware's "The Old Republic". Both Jay and I await a new opportunity to meet up with old friends and maybe a few interested YouTubers and have new adventures in "A Galaxy Far Far Away"....

*NOTE* This was actually meant to be yesterdays post but blogger gremlins ate it once I hit submit and hours of work disappeared. I was so mad and had no time to rewrite it. I banged my keyboard on the desk like an angry wookiee....but here we are today. I hope you enjoy it. :)
Posted by GFV at 10:58 AM