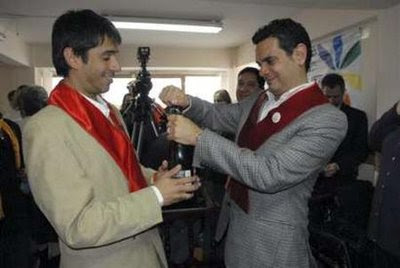 For those of us who have been following the story of Jose Maria Di Bello and Alex Freyre's struggle to marry in the country of Argentina, yesterday held a wonderfull surprise, reported on Edge New England.

CONGRATULATIONS!....THEY DID IT AT LAST!


It was a long struggle but in spite of government interference, the couple was able to find support to marry in the neighboring state of Tierra Del Fuego in the city of Ushuaia,  said to be the southernmost city in the world. According the article the city of Ushuaia initially refused their request until they got the backing of Tierra Del Fuego province and Gov. Fabiana Rios. Rios is quoted as saying that gay marriage...

"is an important advance in human rights and social inclusion and we are very happy that this has happened in our state."


And, of course, this story would not be complete without a guest appearance by a representative of the Catholic Church. "The decision took me by surprise and I’m concerned," said Bishop Juan Carlos. He considers Freyre's and Di Bello's union to be..."an attack against the survival of the human species."....right...like we haven't been here all along or anything.

And the happy couple?

"My knees didn’t stop shaking," said Di Bello. "We are the first gay couple in Latin America to marry." 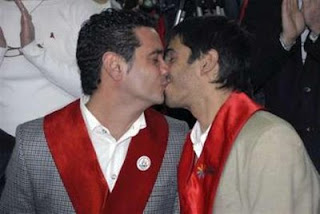 Congratulations gentlemen ...and to the GLBTQ peoples of Argentina. I admit to being very down when this was originally blocked. Marriage equality took alot of blows to the gut just a few short months ago and it may happen yet again...but...Tonight is a good night to celebrate and we will raise a toast to your unions. May your lives together be full of love and blessed beyond your imagining. All our best hopes and wishes go with you for a long and happy life together.