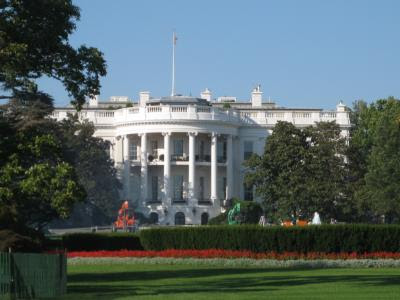 What if America ...by some extreme outside chance, elected an openly gay President? Or... What if we elected someone we thought was straight only to have Them come out after election? How would our world be different today? Would gay rights advance any faster?

This question is brought to us today by U.S. Sen. Jim DeMint (R-SC), Who recently made this comment posted on www.bloomberg.com:

"It would be bothersome to me just personally because I consider it immoral."

And his thoughts on gays and our marriages?

“Governments should not be in the business of promoting a behavior that’s proven to be destructive to our society.”

What a prince...sadly he's drawing alot of conservative attention...but he's not our topic today, though he has provided grist for the mill.

Would having a gay President advance the cause of GLBTQ rights in America? This issue seems deceptively simple...gay President= gay rights yes?...Not neccesarily.

Though the Whitehouse might get a decorating makeover and it would be wonderfull to have a "First Husband". Our experience with our current president highlights how a Presidents power can be thoroughly blunted if he does not have support from withing his own party AND if the Republican spin machine is allowed to continue dominating public debate with no resistance from Democrats. However, a gay Republican President would put the democrats in a rather interesting bind as they have always claimed to be the party that supports gay rights. It would make them have to prove just how gay supportive they really are. But that has about as much chance of happening as bigfoot being elected President...which would get the bear vote however.

There are openly gay politicians out there. So the possibility that we could see a gay president is out there, but we are still light years away from electing one.

American conservatives would go into histrionics, to be sure. A gay president would be seen as a sign of the end times and they would be running to the bomb shelters and gun stores in droves. There would be prayer vigils the likes of which this world has never seen. It would be the worlds largest attempt to "pray the gay away". There would be tremendous outcry about how they were going to be victims of anti-religious legislation even though such claims are and always have been, unfounded. In short it would be a drama of epic proportions.

One positive of having a gay President would be that the nation would be able to see the life of a gay person in a thoroughly public arena. Perhaps it would allow America to see that the sky would surely not fall if we allowed ourselves to think about Gays and lesbians as people, instead of "sinners" or "perverts" and that gays have as much or more courage and moral fiber as any of the past residents of the Oval Office.

But what could he practically accomplish? I'm not a political expert so this is really from the realm of my imagination...BUT....Heres where I don't think it matters if your gay or not. The right leader with the right mix of charisma and political know how can do a great deal. First would be those things that only require an executive order to accomplish, like stopping anymore soldiers from being kicked out of military service until DADT could be repealed be vote. Then would be the more complex issues that require approval of the House and Senate. This is trickier and I actually think that having a gay president would be a detriment to the process even though he may fight passionately for it because the anti-gay crowd would be quick to brand it as an attempt to "homosexualize" America.

People have to love their leader to a certain extent. They need to see them as a strong leader and someone who's on their side,....and they need to see results. Without these, no President is going to be very effective regardless of his paraty/sexual orientation/"add label here". Its very difficult to believe that those new tax's they are proposing are really going help if the price of a full tank of gas requires you to take out a loan or if we continue to fight wars that seem to have no ending.

I really don't think, from a legislative point of view, that it would matter what characteristics a President has...like their gender, sexual orientation, or ethnicity...it matters more what character they have. Do they have the iron will it takes to weather the slings and arrows of political opposition and still get enda/health reform/troop withdrawels/immagration reform/marriage equality passed. History is filled with Presidents who did amazing things for the good of the country without having unanimous support or giving a dam about elections. We would have no "New Deals", no space programs, no vote for women...if courageous people...and presidents didn't take the risks needed to make these events realities. You don't need to be gay to make great things happen...but would it help?
Posted by GFV at 8:21 AM