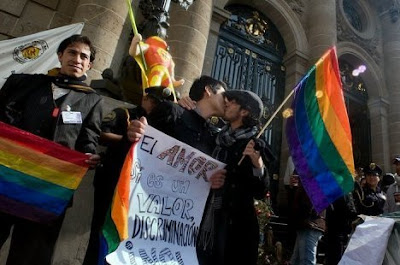 Do's and Don'ts for approval of marriage equality...the "Foot in the Door" method:

..DO..begin with the legislature of a major city who is willing to bring marriage equality to reality and build from there....

Seriously..that's how it seems to work for the majority of the time. Marriage equality began, for us here in California(though Massachusetts beat us to it) with Gavin Newsom and and the city and San Francisco. Washington D.C. recently passed its own marriage equality statutes, recently signed by Mayor Fenty...and Now...Drumroll please!.....MEXICO CITY!

I don't know about any of you but that one caught me quite by surprise. I didn't even know that particular airplane had taxied to the runway let alone that it was ready to take off.

Following a vote by the Cities legislative Assembly. The measure passed by a vote of 39-20 and it is expected to be signed into law by Mexico City Mayor, Marcelo Ebrard. In a REALLY unexpected move they ALSO passed legislation to allow gays and lesbians to adopt by a vote of 31-24.

Really....Two civil rights wins on the same day? Anyone checked the temp in Hades lately?

But of course, in an effort to save face with a more conservative populace, Mexican President Felipe Calderon and The National Action Party, have declared that they will challenge the law through the courts.....right....because we just can't let people be happy can we?...with the back and forth nature of marriage equality laws lately, this will be one to watch to see if it has the ability to stand the test of conservative backlash.

Good for you Mexico City...Congratulations from all of us. Let your wedding bells ring this holiday season so that other countries can hear what freedom sounds like and follow your lead.
Posted by GFV at 10:50 AM