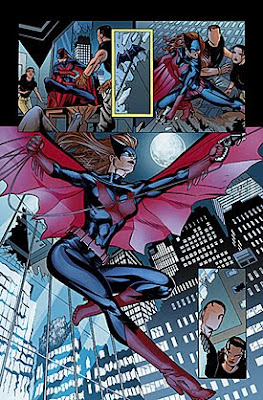 Holy Homosexuals Batman! The joker must have slipped something into Batgirls drink because she doesn't like men in tights like we d*....Uh, I mean...like she used to!...and why is she snogging Catwoman?...

Finally!...batgirls out of the closet! ...the only question is what item in her utility belt she used to break out. Perhaps a little bat-courage?..bat-ingenuity? Only one thing is for sure, gone is the helpless sidekick, and in her place stands an ass-kicking  heroine.

but seriously true believers!...A large portion of comic readers are gay. In fact, my first boyfriend was obssesed with superheroes to the same degree that I obsess over Star Wars. It was through him that I learned about Northstar, the first out, gay, comic hero.

One of the reasons that so many Gays and lesbians love comics is because the themes they present mirror our experiences of being outside of society. Their themes of alienation, and trancendance make an automatic connection with many gay readers who put themselves in the shoes of the hero on the page, righting the wrongs of our world...or at least escaping it for a while.....And the fact that they are hot doesn't hurt either. 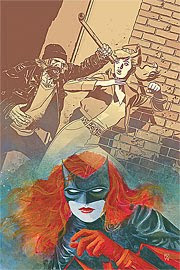 Detective Comics #859 tells the story of Batwomans origins and,...interestingly ...that she was kicked out of Westpoint under allegations of having a relationship with another cadet. Rather than buckle to "Don't Ask Don't Tell" she instead opts to tell the truth and is discharged from the army. How this leads up to to becoming a bat-themed crime fighter I really don't know...but I will be heading down to my local comic shop to find out! The story continues in D.C.'s series "52" issue #11 where socialite Kathy Kane, as Batwoman, will be fighting crime alongside ex-Policewoman (and ex-girlfriend) Renee Montoya, in a Batman/Commisioner Gordan type relationship...with benifits.

While Batwoman being a lesbian doesn't make her the first gay character ever to hit the comics stand, it does make her the most recognizable. Previous Gay characters where usually side characters in lesser known titles...the most popular being, Northstar of "Alpha Flight". A quick peruse of the Wiki reveals a rather extensive list of gay side characters from Marvel, D.C., Darkhorse, and a host of other comic titles...but none to instantly recognizable as batwoman and certainly none with their own title. I hope she blazes a trail for more to follow her harrowing example. I aways though Batman and Superman had some homoerotic tension going on, maybe its time they owned up to it. 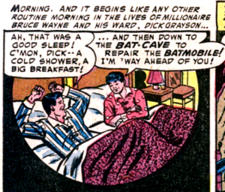 But, my Crimefighting Connoisseurs! ....will batman ever come out?!....will our Sapphic superheroine give him the courage?! ...will he ever shed the stigma attached to his relationship with his young ward? We'll just have to tune in later to find out!....Same bat-time!....Same bat-channel!