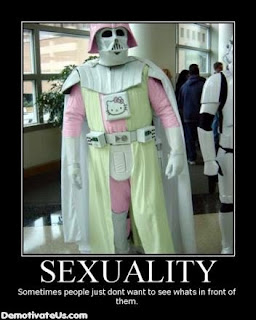 We've been talking alot about the faulty belief that being gay is a choice, that it can be caught by association with gay people, and that you can be "convinced" to be gay. All of these faulty assumptions completely negate the soul searching, denial, and overall struggle the average gay/trans person goes through to come to a place of acceptance just for themselves. To find the ability to say "I am gay"...nevermind considerations of acceptance by others.

Self acceptance is not a static event but more a process that happens to us as our lives progress. I can remember back into my grade school years how unhappy I was then. I was skinny and on the outside of the social pack, looking in. Everday I would look in the mirror and wish that my eyes were blue and my hair blond like the cool kid in my class that everyone fawned over. Of course, none of those things ever happened and things continued on this way for years. I hated who I was. Being gay added a whole new dynamic to this. What was once a shame, turned out to be the key to finding some measure of self worth.


Some people have an idea that there is something different about them from a very early age. For instance, one of the witnesses in the the Prop. 8 trial, Author Hellen Zia, testified in court that she knew from ag4. Her story is far from unique in that regard. I have a friend who knew since his preteen years. I had no such insight however.

Growing up in a home where your religion tells you its not right...where you parents tell you your going to marry a girl someday...and where sometimes threats were used....you develop a hefty case of denial. That was me. Tons of things happened that should have clued me in to my sexuality. Pinning up posters of bodybuilders instead of women, private moments with the latest Muscle and Fitness magazine or those mail order underwear catalogs...you get the picture. Staying up late at night to find the softcore porn movies on cinemax to see the guys. Even finding my fathers dirty magazines...I didn't care a thing for the women in them. None of this was enough to make me look in the mirror and say "you know...I just may be gay". That' some deep denial. But whenever something happened I wrote it off as "temptation" and prayed it away as fervently as I could because it just wasn't possible to be gay....I thought those guys were all perverts and  Fems (awfull but true) and I wasn't a pervert....so went the rationale. 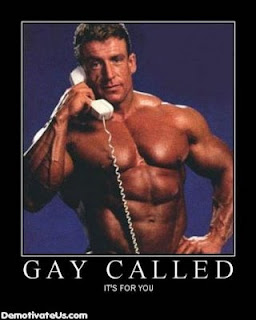 So I buried it deep. and after waaaayyy longer than everyone else...my puberty finnally showed up.  I spent it dating girls and as you already know...it didn't go well. Even when I was having my first sexual experiences with a girl that I believed that I loved...I still fantasized about men....then tried to forget I did it.

Finally I buried enough that was no room for any more and the fantasies became louder and more persistant. I couldn't pray them away or ignore them anymore. I simply thought about men too much. That was the time I decided to go to a bookstore and read up on it. I was no stranger to book stores, they were my favorite place. However this time, I felt I needed to go in sunglasses and a trenchcoat..I was so scared. Walking into the gay and lesbian isle I kept scanning to see if anyone was watching me. As I began to peruse the books, I studiously ignored everyone else shopping around me. Then a funny thing happened.

This really young guy (he was 17, I was about 21)began asking me questions....."Oh hell" I thought. This is the last thing I wanted right then. My anxiety meter shot off the chart. But he was persistant and inspite of myself I got wrapped up in conversation with him. He turned out to be the first person I ever told I was gay and became a lifelong friend. We helped each other take those first steps out of the closet. We went to a youth group together and there, each of us  found our first boyfriends. Nothing more ever happened between us and we are still good friends today. I owe him a debt of gratitude for being so persistant on that first day and for getting me talking or I might have just chickened out and gone home....it was the beginnings of my  first sense of self acceptance, not only as a gay man...but of any kind. The idea had begun to grow in me that I wasn't defective or an outcast....

now I only had to face the terrors of coming out to my family and friends who I thought with all my heart would abandon me. Thankfully 99% of them didn't but that did not mean that I did not agonize over telling each one. The thing is, when I told my parents and closest friends...I didn't care anymore who thought what about me. At this point I stopped playing the "pronoun game" entirely when talking to people about my private life....another hurdle cleared.

It needs to be said here that getting out of my home town and actually seeing gay people beyond the confines of a t.v. screen helped alot in throwing away my ..very, very bad preconceived notions of gayness. I met people with tremendous courage though they all seemed to also have broken hearts. They came in all shapes, sizes, and colors. I saw men that fit my view of what masculinity meant and exceeded it. In short...it blew my roof off...now I had to really think instead of just accept what I was told my entire life.

Then dating brought a whole new identity crisis....sex and power struggles. I had grown up in a home where "the man ruled the roost". While this caused some friction whene I dated women, I went into full tailspin when I dated my first boyfriend. Sex was the big deal...now there were positions to consider. What did it mean if I was the reciever instead of the giver. What if it was enjoyable? Did that make me less of a man? It took a while to completely throw out all the gender role stuff and just be me, to learn to enjoy sex without those associations, and find that strength and masculinity have nothing to do with it. Be who you are, love what you love.

Sorry about the length of this post and its rambling nature. I had a lot to say and a small place to say it in. It may be too much information for you but I felt it was all neccesary to tell the tale correctly.....Even though I came to terms with my sexuality...and my sexism...the road to acceptance still leads on. I still struggle with the attitudes of the world toward me and my family. I alternate between Zen acceptance and wild rage depending on events. Also, growing older also teaches you some lessons as well. Those first signs of gray in your beard and the growing tummy signal that you are now leaving young adulthood...please take all your baggage with you. In an image obsessed culture, its another lesson in self acceptance we have to go through. I have my battles still...we all do...I'm gonna get back to that washboard stomach someday :)    But I know longer wish for the blue eyes and blond hair ...I like being brown haired, brown eyed, gay, and married me.
Posted by GFV at 1:22 PM