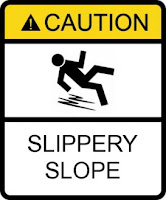 This is a term that those who oppose gay marriage attempt to use when they want to portray themselves as having a "rational basis" for their resistance to allowing marriage equality. The line of argument goes that if we allow gays and lesbians to marry, then that paves the way for polygamy, incest, and bestiality. Does this sound absurd to you? Well...here is a quote taken from Proposition 8 documents as they are being entered into evidence, as reported by the Courage Campaign Liveblog:

Lion of Judah Church of Boston, says, “Polygamists are waiting in the wings! If we have same sex marriage, we’ll have polygamy next.”


Yes..they are just lining up and waiting for their turn to have their lives and loves subjected to a federal trial eh?.....somehow, I don't think so...

So lets take this one apart Shall we?


Polygamy:
In a previous link post, I and several readers, discussed our feelings on the polygamy argument. my feeling on the issue are...that I feel I have no right to tell someone that their feelings for someone ...or their relationship..is invalid because it doesn't match mine. I don't think ANY gay person has the right to stand in judgement in light of the history of judgement and condemnation that we have to live with and overcome. That said....

Legally...I don't think we would ever see polygamy legalized. There are just to many legal questions. How would you handle taxation? How would you handle issues of child custody and guardianship? If its o.k. for a man to marry more than one woman than will it be o.k. for a woman to marry more than one man? This would create legal ties between individuals that would best be described as "Byzantine" at best. Then What of divoce? Who determines how assests and possesions are split? If one spouse was in the relationship longer than another spouse do they get a bigger share of the family assets?

This is meant as know disrespect to anyone in a polyamorous or polygamist relationship. As I said..I don't feel I have any right to judge the quality of love in such a relationship. I do think however, that opening marriage to gays and lesbians is not the same thing as paving the way to legalizing polygamy. Characterizing it this way is not only ill thought through...its irresponsible in that it illicites nothing but a fear response.

Bestiality:
Seriously?....This is the argument where I have heard that we will now have to legalize "sex with ducks"...
Yes I said that out loud. Pat Robertson actually said that gay marriage will lead to having sex with ducks on his television show The 700 Club. So really.... What if a man came to city hall with his dog and asked for a marriage license? Would he get one?.....NO....and since we are baby stepping our way through this...why did he not get one? Because the dog is not a legal entity. We say that an animal has a "right" to humane treatment and we have ordinances that provide for the protection of animals from cruel treatment. However, that is not the same as the rights we accord human beings, because an animal can not reason on the same level that that a human can. It would have no way to understand what whas happening to it and no way to voice it's opinion if it did. Thats means, that this would not be a union of equals but one being lording its power over another being who could do nothing about it. This is an unfair and unequal situation and rightly considered animal cruelty.

Pedophilia and Incest:
Aye Carumba, do I have to tell you why this would never be legalised? Detractors claim..."Mothers will marry sons!"...."Brothers will marry sisters!"...oh really? Did we slip into a greek tragedy and I missed it? The only people I have EVER heard of doing such a thing, in real life, is a handfull of Roman emporers. I have never known, nor heard of a single case of this happening in modern day America. The reasons why are clear. There are solid emotional, and biological reasons why we do not let family members marry. We allow for the emotional and physical wellbeing of children by not allowing them to be taken advantage of by an adult. We allow for the protection of the health of future generations by requiring that you marry outside of the gene pool that you swim in....believe me, no ones trying to buck that system.

Aside from the instant feeling of nausea that this argument evokes....those who make this argument usually come from one of two camps....Those who believe it....and those who want to use it to inspire fear in those who believe it. Its the same old "all gays are pedophiles" argument that has been so destructively used against the gay community for years. It has been used as justification for imprisonment, involuntary admission to mental hospitals...lobotomies and shock treatments...all manner of horrors in the name of "protecting children from teh gays". But no one protected us. Using this argument is an act of hysteria and irresponsibility that in its worst manifestation, leads to more violence toward the gay community.

This is the pandora's box that same-sex marriage opponents claim will be unleashed if we are allowed to marry. However, the funny thing about boxes is, that you never know whats in them until you lift the lid and look inside. Perhaps what would escape would not be imagined horrors..those are already out there. Mayby what we would find would be a treasure chest of hope and a fullfilment of America's promise.

That promise has been rocked in the last several years. Wire tapping of American citizens without their awareness...individuals being held without warrents...allowing unlimited donation by corporations to political campaigns. This does not sound like the America I was raised to believe in...it sounds like a sacrifice of her character in the name of expediency and personal gain....This is the true slippery slope.
Posted by GFV at 2:16 PM