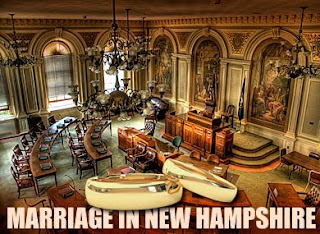 This is the playbook for NOM and those who would march beside them lockstep.

How to brainwash in six easy steps:

Step 1: Craft misleading petition campaigns that put the civil rights of gays and lesbians up to a popular vote.
Step 2: Tell lies about how kids in school will be taught gay marriage
Step 3: Tell lies about how religious freedoms will be repealed if marriage equality is allowed.
Step 4: Take massive amounts of money from religious institutions to finance your campaign built on lies and then lie again claiming you got it from "concerned citizens".
Step 5: tell more lies about how all gays and lesbians who want to marry are actually "radical homosexual activists" who want nothing more than to destroy marriage.
Step 6: Rinse and repeat as neccesary

Guess where we will see this played out again?.......New Hampshire!


Hey wait a minute....didn't their marriage equality law already take effect? Why yes dear reader it did, on January first in fact. Man...cant they just let people be happy and move on with their lives? No apparently they can't...or won't. For them this is a reason to be...a cause to give them purpose....its culture war, that absurd term that implies that culture somehow belongs to them. So, fresh out the chapel, newlywed gays now have to face the possibility of yet another ballot initiative fight to retain the rights recently granted them. Not that we should be surprised....At this point we should expect it as a matter of course. We've been down this road enough times to know that this is going to happen time and time again in every state in which they can force it to a vote.

According to The Unionleader.com this effort has been months in preparation and is spear headed by Republican Rep. David Bates :

A state representative from Windham is leading an effort to bring a constitutional amendment on gay marriage to voters this fall.


"This is in response to the law which took effect Jan. 1 that redefined marriage to include homosexual relationships," Bates said in his e-mail. "The question voters will be asked on March 9 is intended to determine the will of the New Hampshire voters concerning the marriage debate."

A bill is coming to the Legislature this year to repeal the law, and a group of three Republicans has proposed a constitutional amendment that would ban gay marriage.

CACR 28, sponsored by Dudley D. Dumaine, R-Auburn, proposes an amendment that says, "The State shall only recognize as marriage, whether in name or effect, the union of one man and one woman."


A constitutional amendment must be approved by a three-fifths, or 60 percent majority in the Legislature before it can go to voters in the fall.


Charming wedding gift no? I hope they saved the reciept because we've already got more constitutional bans than we can handle. besides, wouldn't a toaster oven or bread maker be more appropriate? Just sayin...I think It would be an unconscionable crime to grant marriage rights, then snatch them away....again.

No word yet on any affiliations with NOM but you can bet it won't be long before we do and then we will also see the above steps played out in vitually identicle form to Maine and California. Lets hope this thing doesn't get past the petition stage.

There is hope though, in the form of Mo Baxley of New Hampshire Freedom To Marry who's feeling are thus:

In closing I would like to present a Youtube video from Israel that Jay recently brought to my attention. I think this sums the situation up nicely that when we fight a monster we are in danger of becoming a monster. This is a message to NOM and those who use hatred and lies to incite fear in the general public...this video is what can happen to you if you continue to go down such a negative and hurtfull road.

"People should not seek to impose their personal religious views on others and should not spend taxpayers' money doing so. It certainly doesn't change anything. Couples are married. They're going to stay married and I think there are probably better things for folks to focus on,"