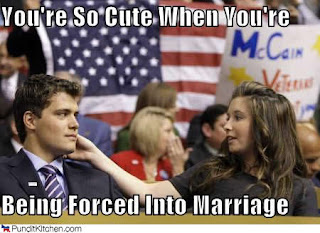 One of the arguments used by Prop 8 legal defense is that allowing gays to marry will somehow degrade the "institution" of marriage. One has to wonder how anyone can come to this conclusion but through severly twisting logic and completely ignoring history.

In our modern view of marriage, I don't think anyone wants to look at marriage as an "institution". That word conotates Baby poo green hospital walls, white coated orderlies, and lobotomies. Most people look at marriage as a powerfull emotional bond, rarely do we look beneath the surface of marriage. To do so would tarnish it some way...take away its magic. The only time we ever really examine marriage in a clinical sense is when we need to dissolve one and figure out who gets the kids and who gets the furniture.

So, who really is responsible for denigrating marriage if we have to look at it through two lenses...the legal, and the emotional? Presuming that both of them are as bound together as the two people who vow "till death do us part"... the answer is not what you may expect.


Many people blame divorce for the erosion of the American family and they would have alot of evidence to back that up. I myself have been affected by what happens when a family goes into meltdown. But is that really the cause? What makes divorce happen?....Lack of love?....spiritual degeneration?...I don't think so. Its much simpler than all that.....It's all "Leave It To Beavers" fault. By that, I mean unrealistic expectations of what marriage is and who we are within it.

Its no accident that my parents generation began the sharp upward statistical climb in divorce rates. Many married early, barely out of their teen years. Women had children and became homemakers during a period of history when they discovered that they could also venture into the workplace and be their own breadwinner. Sexual mores changed. Out went the separate twin beds of "I love Lucy" and on came more frank discussions about sexuality for pleasure...not just for making babies. The world had changed, but we didn't change with it...instead we blamed spiritual decline....and yes sometimes...teh gays. It was too hard to face the fact that the dream lives that we were building had in fact changed us. In enjoying a better life...an American dream...we asked ourselves, "Is there more?"....oh yes, there was...but some of it came with awfull growing pains.

Being the child of a divorced family. I know that marriage has already been redifined long ago, not by gays, but by the very people who are still trying desparatly to make it fit that "Ozzie and Harriet" mold that has only ever been a recent addition to the history of marriage. Just as another recent change, interraciall marriage, also redifined what my grandparents thought of marriage....and against the wishes of a religious majority who used the Bible as reason for their resistance, I might add. 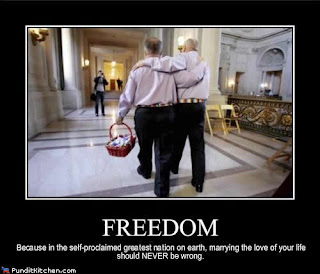 One of the arguments made by Charles Cooper, Attorney for Prop 8, is that allowing marriage will lead to an abandonment of the "institution" and that allowing marriage equality will lead to an increase in divorce rates. ....I hate to break it to you Mr. Cooper but none of those arguments are true and you knew that when you offered them in court. Massachussets, which has had gay marriage for some time now, has one of the lowest divorce rates in the nation. And what about all the gay people who are trying to flock to the institution? Don't they raise those marriage numbers a bit? Is the huge line of gay people at the county clerks somehow blocking straight people from getting their licenses? I doubt it.

If anything was going to discourage people from getting married it was the sexual revolution of the 70's and here we are on the other side of that and still people seek to get married. That says something about its importance, no?

So What can gay people do to marriage that hasn't already been done by straight people a millionfold? Nothing. If you don't view drivethrough Las Vegas weddings as a denigration of marriage, or t.v. shows like "The Bachelor". Then, the only objection that we are left with is that you view US as that denigration. We are the stain, to your eyes. And since that does show obvious and malicious discrimination Mr. Cooper and folks at Prop 8, that would take your words and turn them into our victory.
Posted by GFV at 11:48 AM