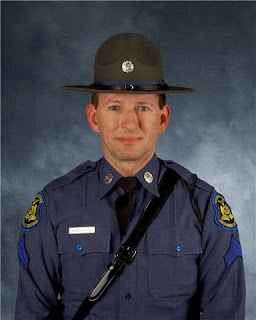 Every once In a while we get a link or an email about a story that strikes really close to home. From  an article in The Vital Voice... The story of Patrolman Dennis Englehard is just such a story. Patrolman Englehard was struck will assisting at an accident site on Christmas day.

I don't know if any one remembers our Christmas morning video. Jay was behind the camera while I handed out the presents under the tree and the kids got to make out like bandits. That moment could not have been made if instead we had recieved a phone call saying that Jay had been killed in the line of duty.


Dennis and his partner, Kelly Glossip, had been together for 15 years. They were raising a son together. Now Englehard's partner and son are facing the loss of a husband and a father without the support that would traditionally be afforded a law enforcement spouse....or any spouse for that matter.

In obituaries about Patrolman Englehards memorial services you will find nothing at all about his surviving partner and son...nothing that mentions that he was gay....nothing except references to his service. At the Missouri State Highway Patrol Website :

Survivors include his parents, Jim and Marge Engelhard, of Excelsior Springs, MO; one brother (and sister-in-law) Dan and Kelly Engelhard and their children, Jenna, Jacob, and Jackson, all of Oak Grove; three aunts, Carol Kearns and her husband, Junior, of Brookfield, Frances Smart and her husband, Donald, of San Diego, CA, and Bernice Engelhard, of Marceline, MO; and many loving relatives.


I guess "loving Relatives" was meant to take in his husband of 15 years and son.....yeah right...

And one thing that all "married spouses" of law enforcment officers recieve...aside from support from the department...is the benefits that our loved ones have been earning over their years of service. Englehards partner and son do not have access to that because of Missouri's state laws...

Even "Backstoppers"...a Missouri law enforcement support organization that normally steps up to help spouses at a time like this, has chosen to ignore Englehards family....and we all know why.

So here Is a man who was happily married and raising a family, who has now lost his husband...he finds himself a single parent when he imagined himself growing old with his husband. He has no financial support or recompense of any kind for his families loss ...and the kicker...because they were a gay family, everyone wants to pretend they didn't exist.

This is what awaits us when we ignore marriage equality. This is the ugly face of discrimination that rears its head when we are least able to deal with it.

This is my worst nightmare....The phone call that says "theres been an accident."

Jay drives an hour to work and an hour back. all it takes is one guy texting while driving...or one exploding tire.(This happened once)  Jay works in a facility where the ratio of inmates far exceeds the number of deputies. The close proximity of people in a jail means getting tested regularly for diseases like Tuberculosis. Contact with violent people and exposure to blood is a daily part of the job. One blow to the head is all it takes and Deputies have died in Jays department while we have been together. Every time I think..."that could be us"....I can spin a million scenarios that play out in my mind every day and while I may not worry every second of my life., its always there....and all it takes is Jay being five minutes late for me to start thinking the worst. Nothing is scarier than waking up at 12:30 to find an empty place next to you in bed.

I start to wonder how I'm going to keep this home afloat. How I'm going to work and be there for the kids at the same time. How I am going to get out of bed and do what needs to be done when I would want to lay down and die too.
The other half of my soul would be gone and I would not want to live let alone plan funeral arrangements and think about mortgages. How do I be the rock for Daniel and Selena.....I am thouroughly unprepared for any of this. I don't know how my Grandmother found the strength to do it when my Grandfather died leaving her with two young children.

But I at least would have help, and would not be alone. Making that narrow window for marriage entitles our family to many protections should something happen. Patrolman Englehard's family does not have that help or support. As Jay just said, "How do his own coworkers not stand up for him?" ...indeed not one member of his family had the decency to say that excluding his husband and son from the obituary was wrong?!....I don't know Englehards or Glossips relationship to his family so I can not make a judgement...but I can not help being angry and asking why?

Being gay was only a part of who he was as a man...just as being in law enforcement was only a part...but to deny either is to dishonor his life and all that he stood for.