New Jersey votes Live and Courts Come Out of The Closet. 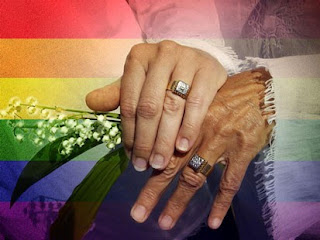 Coming out of the closet for most of us means letting go of hiding our real selves, moving from a life of deception, to a life lived openly and honestly. This is not usually a thought that I would associate with the legislative or judicial process, but thats precisely the case this year in California and, most notably.....today in New Jersey.

New Jersey's vote on Marriage Equality occurs TODAY!  The vote will be broadcast live Via their state website.(find it here). Though the prognosis has not been good  for New Jersey's vote, they have New York to serve as an example of what NOT to do. It will be interesting to see how New Jersey's democrats vote given the  reaction to their neighboring states decision and the actions of their democrats.

In Similar news in California, Judge Vaughn has allowed court proceedings in the Olsen-Boies (Perry vs. Schwarzenegger) case. In an interesting addition, Judge Vaughn will also allow video of the proceedings to be uploaded to Youtube.

....really?....that sends my mind down all kinds of speculative roads about why he would allow youtube. Surely he know it would end up there anyway. Is this strictly a show of transparency or is there other reasoning at work?

So court and legislative processes are coming out of the closet. Not that televised proceedings are a new invention. If your interested and have a mountain of patience, C-SPAN has been around for years. But this is different....with so much attention given to the issue of gay marriage, it truly has become THE wedge issue of  our time. No matter which way a judge rules or a legislative body votes, they know that there will be some form of angry mob on their doorstep the next day. So perhaps the move to televise is, in part an effort to cover their behinds, as much as it is to bring honesty and transparency to the process. It's a positive thing for us to see the arguments used for/against our lives, to see what our politicians actually do versus their words. We also get to know who are accusers are and hear their arguments. Which is why lawyers supporting Prop 8 resisted the move to televise based on "intimidation" of the witnesses. If you believe in your views...why hide them?

In addition, in our society so much is available for public scrutiny that when something happens behind closed doors, the public automatically looks on that with suspicion....like the health care debates which were promised to be broadcast on C-SPAN but are now happening in private session. The fact that we can't see whats happening gives rise to allegations of intrigue, shadowy cabals, and corruption.

Now...I don't need to know what Judge Vaughn has for lunch, or where he weighs in on the boxers or briefs debate, but I WILL be watching these hearings with great interest....
Posted by GFV at 10:08 AM